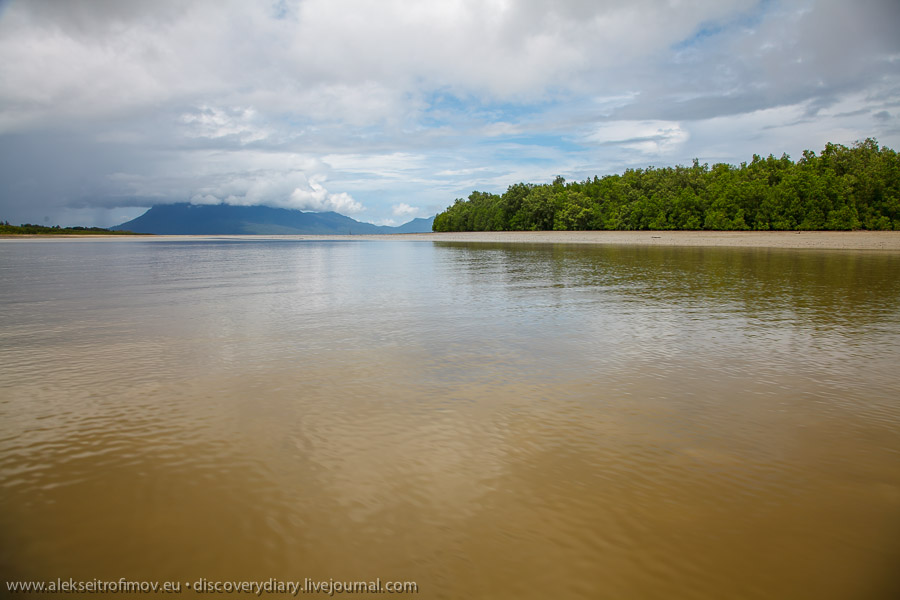 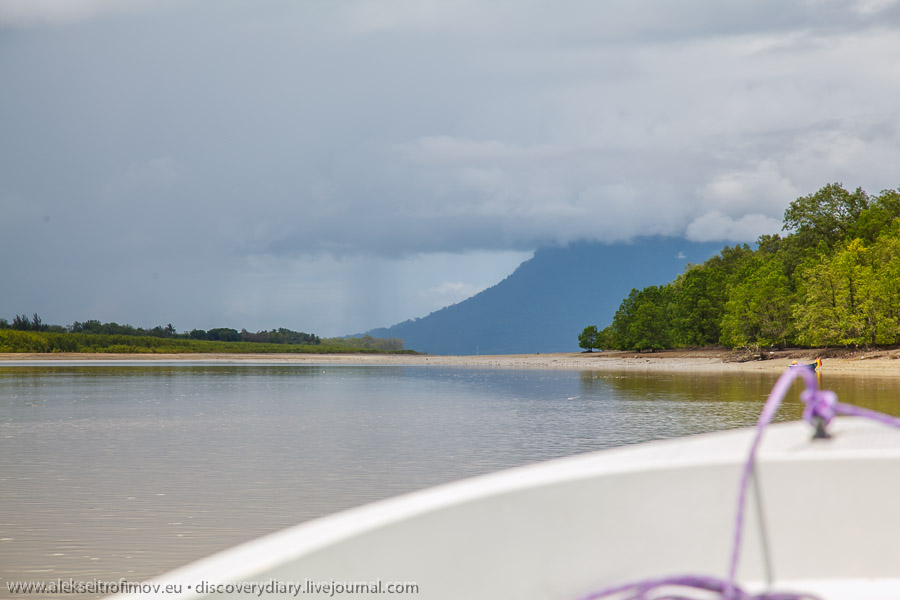 One of the two young boatmen who took up taking us to the park: 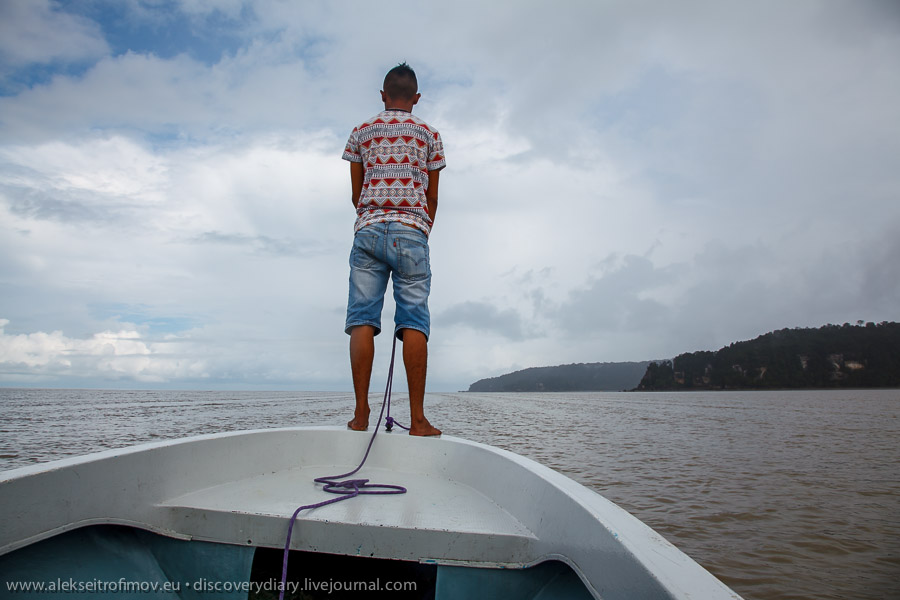 We have reached the gulf: 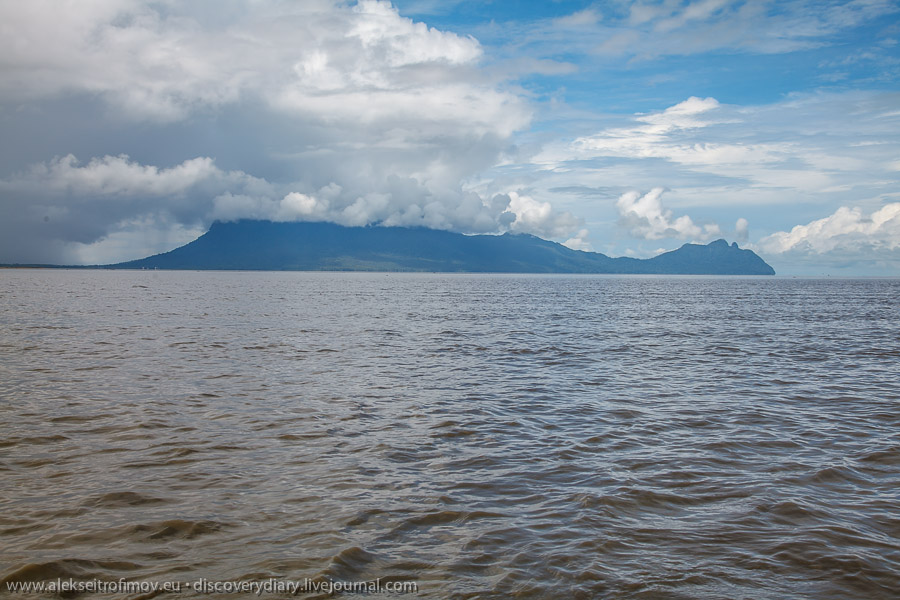 They gave us life vests and a rainproof cloak. The vests made me laugh – it’s as if they would save us from the crocodiles! Later it did start to rain, and in the speeding motorboat the raindrops actually hit your face pretty hard. So the rain cloak came in handy. 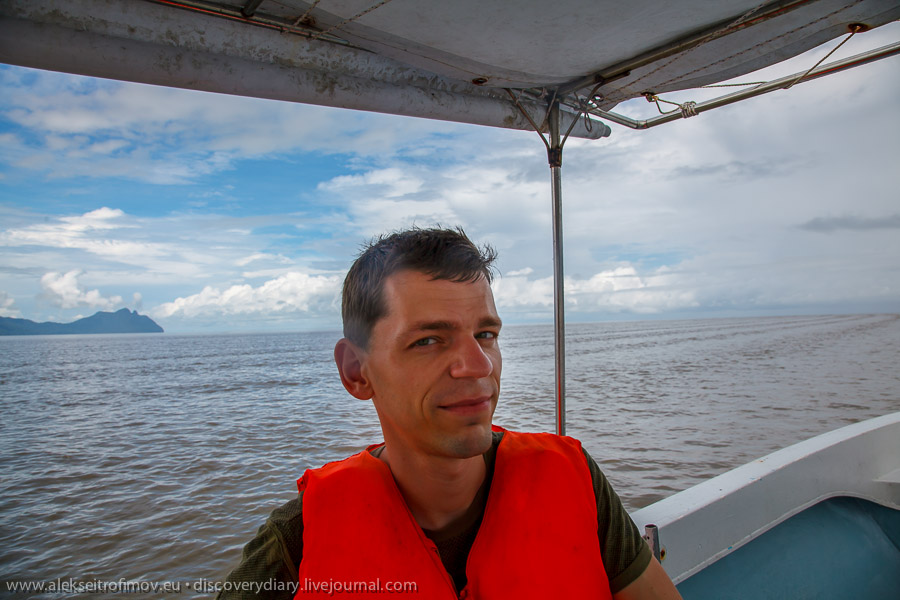 Well, as you would expect, at some point the boat starts hitting the sand. The boatmen jump out and push it through, which works for a while, but at a certain point they can no longer move it. Then they ask us to get out of the boat and help them. Which again works for a bit, but we realise that it is highly unlikely that we get to the bay in this way. The realisation hits us that we will have to walk to the Visitor Centre. In addition I step on some sea creature, I jump away, but still I get a small wound, which stresses me (I have stepped on sea urchins in Croatia and in Greece and had some unpleasant consequences, and this is no Greece). Finally together with the boatmen we head towards the shore through the shallow waters. We realise that it was probably the plan all along. Our boat left standing aground: 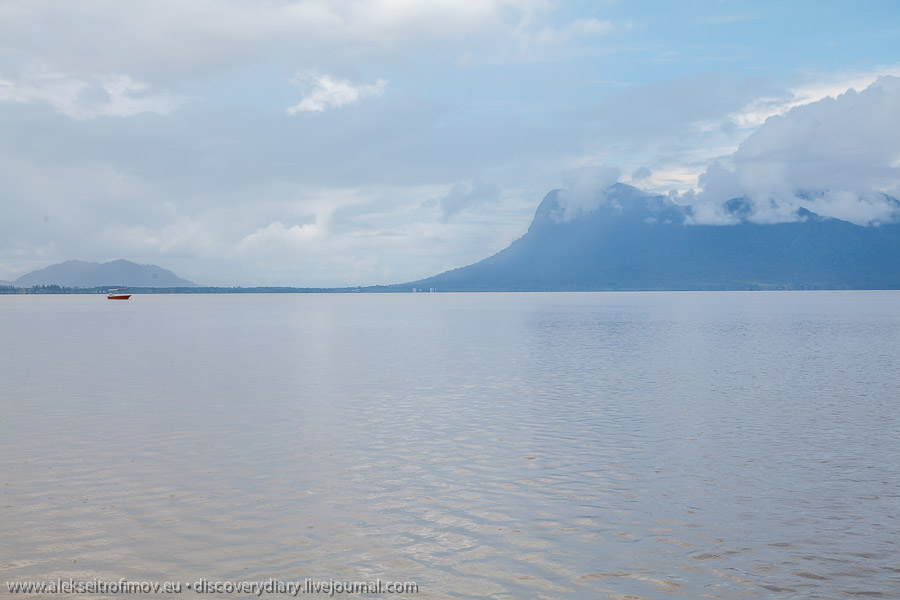 We walk to the shore. The boatmen are out in front: 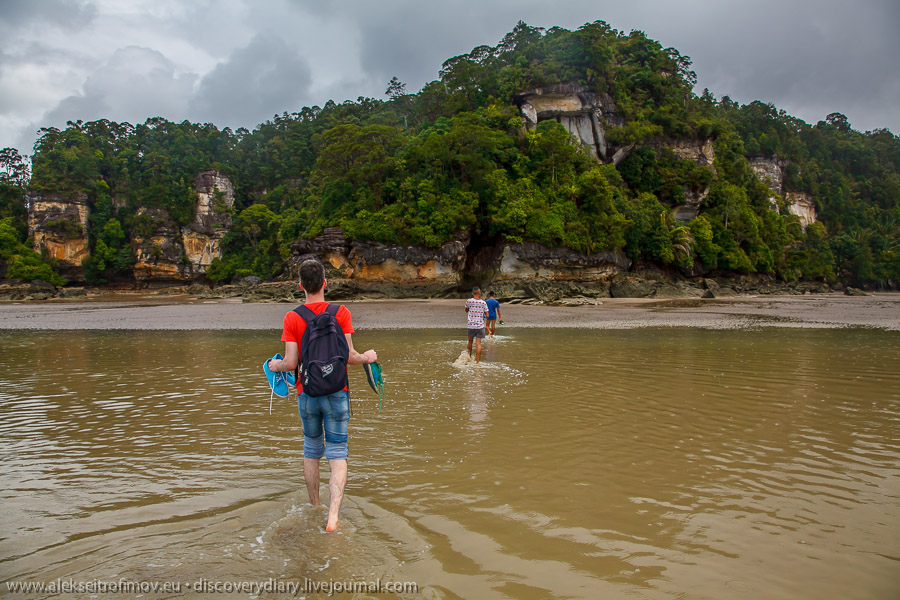 Water draws some rather unreal patterns in the sand: 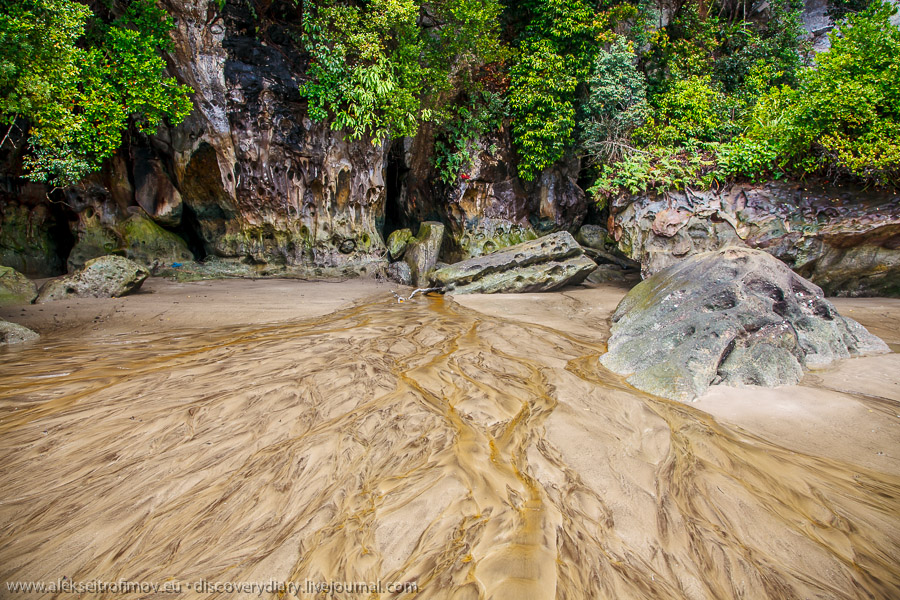 The rocks of Bako: 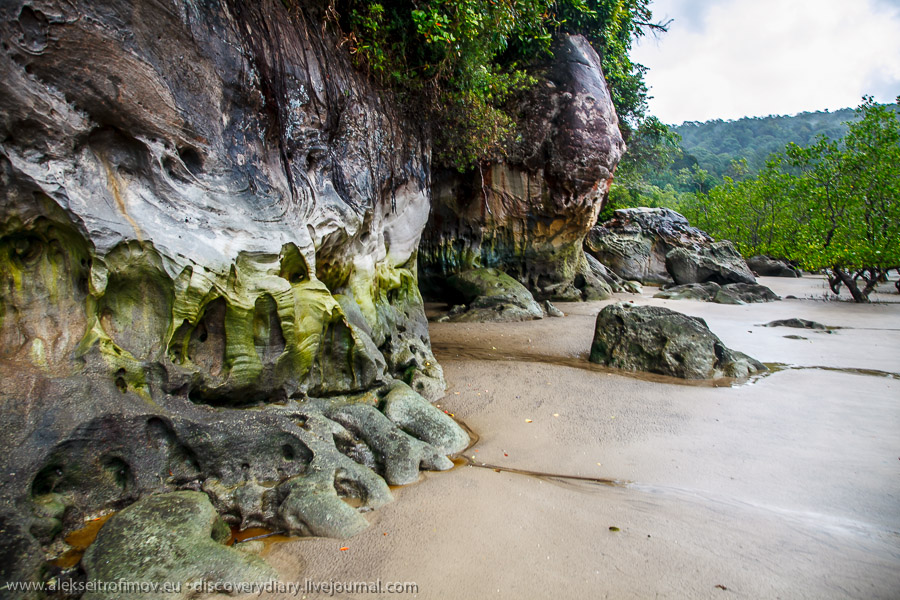 Through the mud of the jungle they get us to one of the trails in the park, the Lintang Trail. 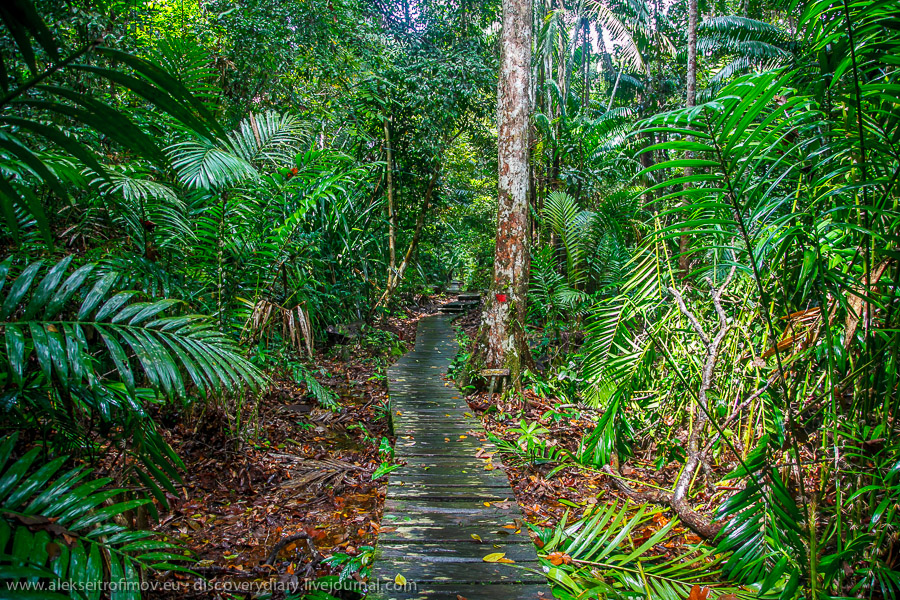 And the trail gets us to the Visitor Centre, pretty late obviously. We only have three hours to walk one of the trails in the park, of which there are sixteen! Three hours because the park is closing at a specific hour and all the boats are supposed to leave by then. But three hours is just enough for instance for the Pandan Kecil Trail, which takes 1.5 hours one way and gets you to a beach on the North shore of the peninsula. This one was the most difficult of the trails for which we had time. And we take off. The first landscape: 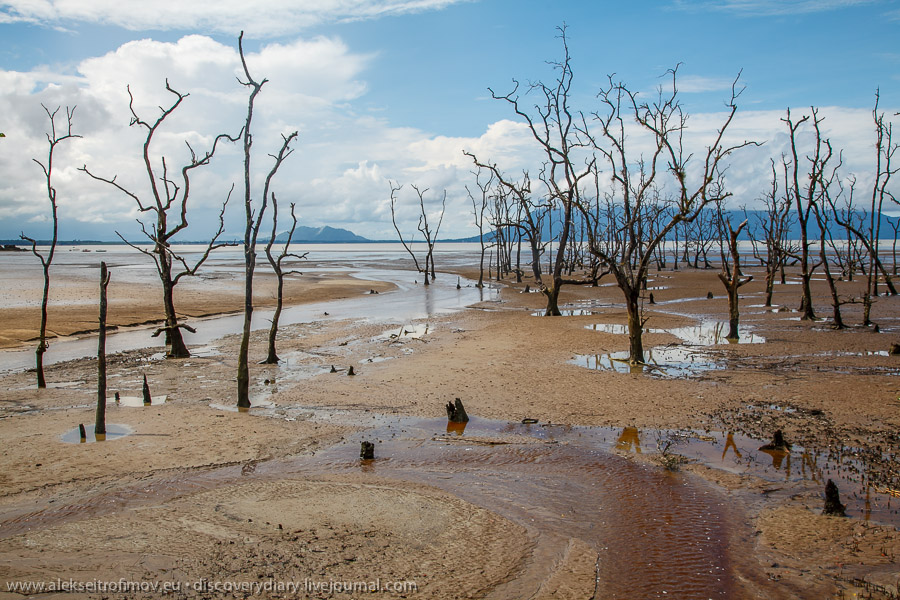 Then the trail turns off into the jungle and keeps heading up the mountain. Actually it is not so easy to climb up though this type of twisted roots, and I realise that 1.5 hours is not an optimistic estimate, as I thought at first. 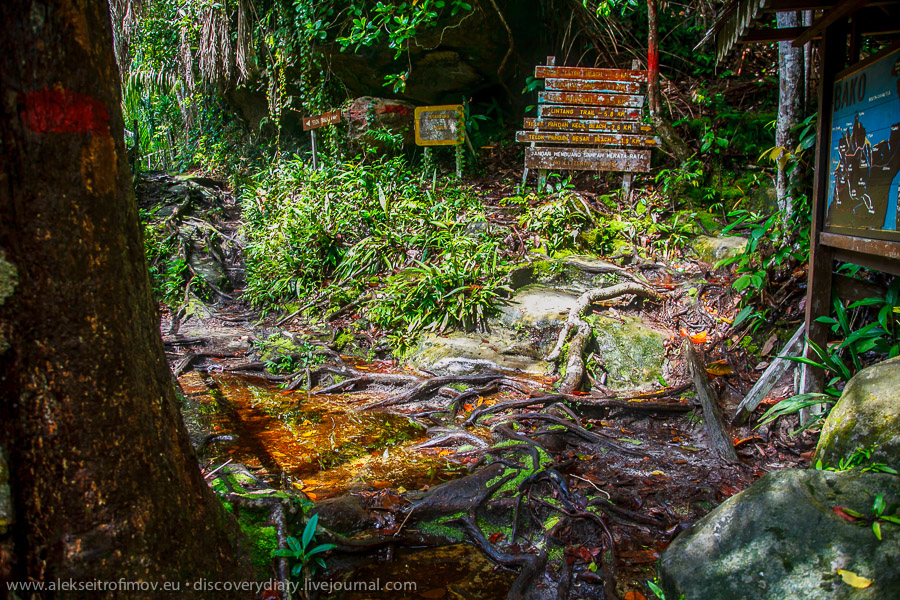 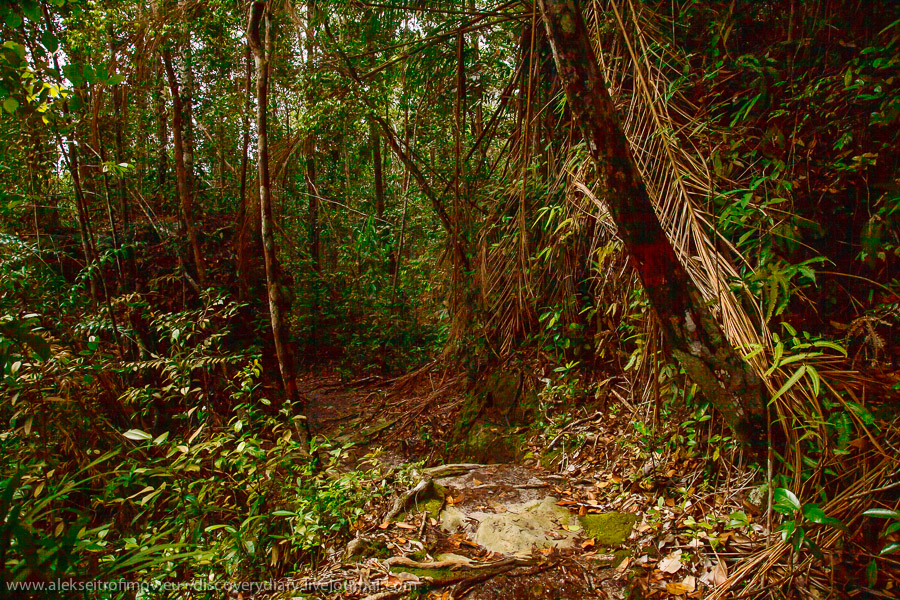 As it constantly changes altitude, the trail crosses a range of different ecosystems. You do not get the kind of a nice trail like on this photo everywhere – indeed oftentimes you simply walk the bed of the mountain stream, right through the water – because walking on the shores would mean going through mud. 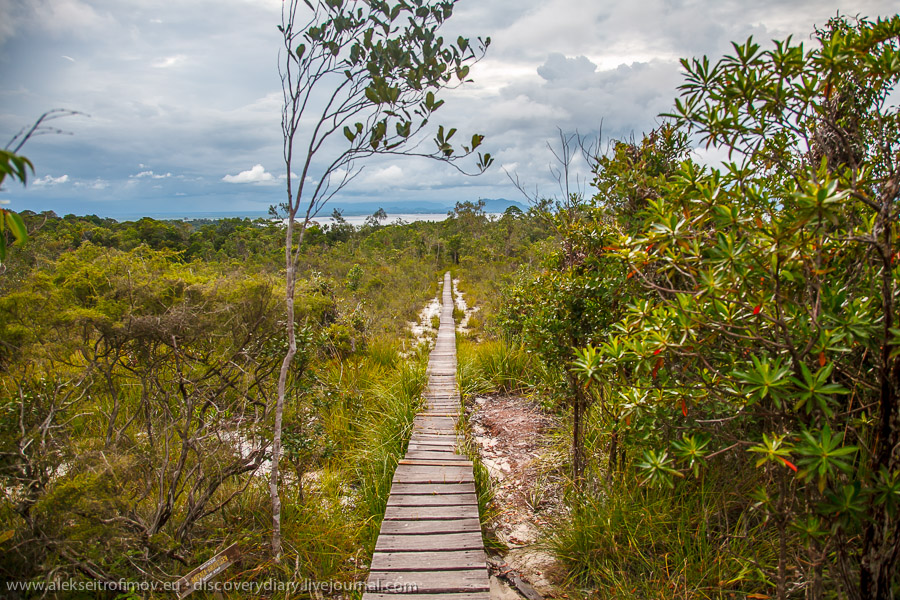 On one of the bends with some trepidation we identify pitcher plants – the carnivorous plants that eat insects! The insect gets into this trap attracted by the smell and within second the trap closes down. The plant then digests the poor little fellow using its own digestive juices. I had only seen pitcher plants before in a botanical garden in Brazil, yet here they were simply growing by the trail. That’s Borneo! 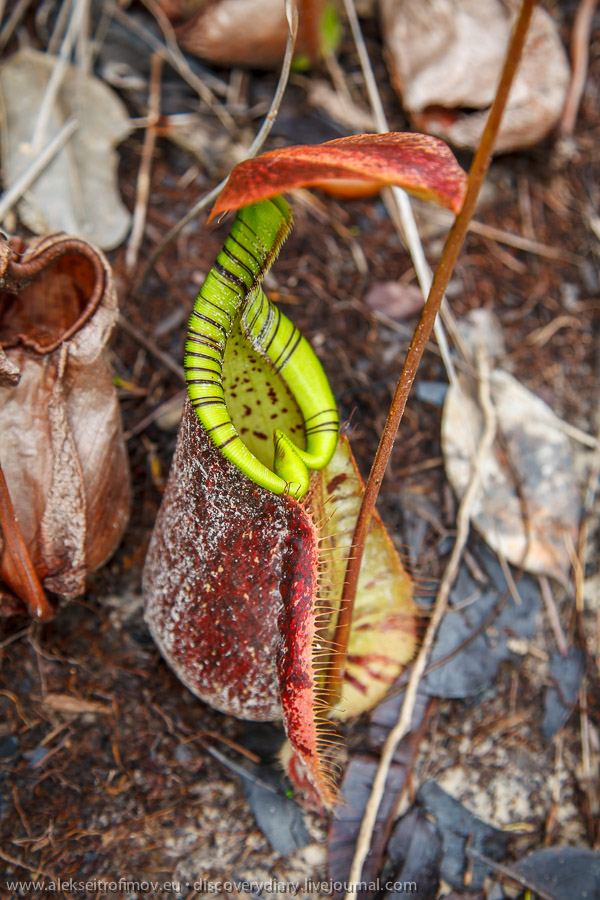 We were compelled to walk with some urgency for the first 1.5 hours of the trail. The difficult terrain and the significant variation of altitudes in the tropical heat meant that we were quite happy to finally reach the promised beach after descending a series of vertical stairs at the end of the trail. The last staircase: 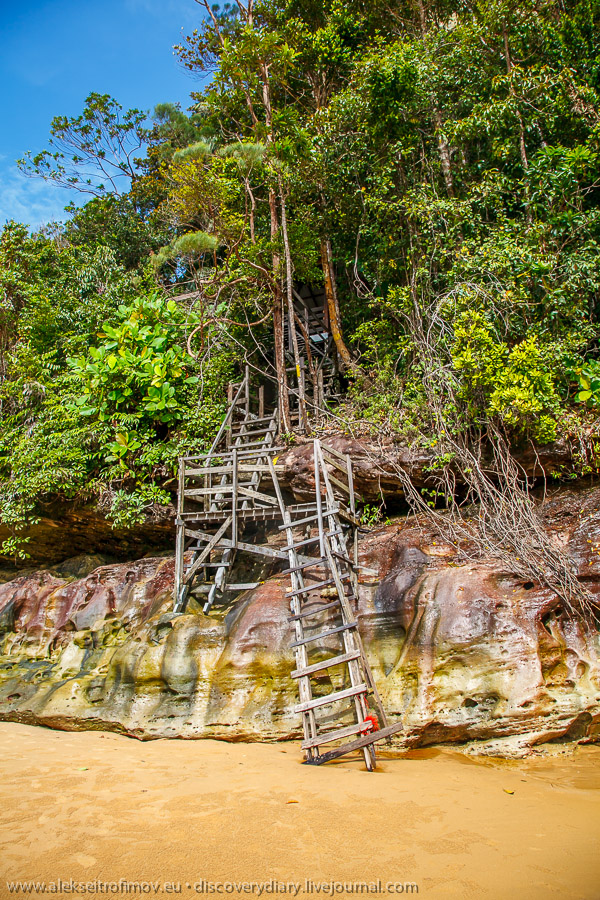 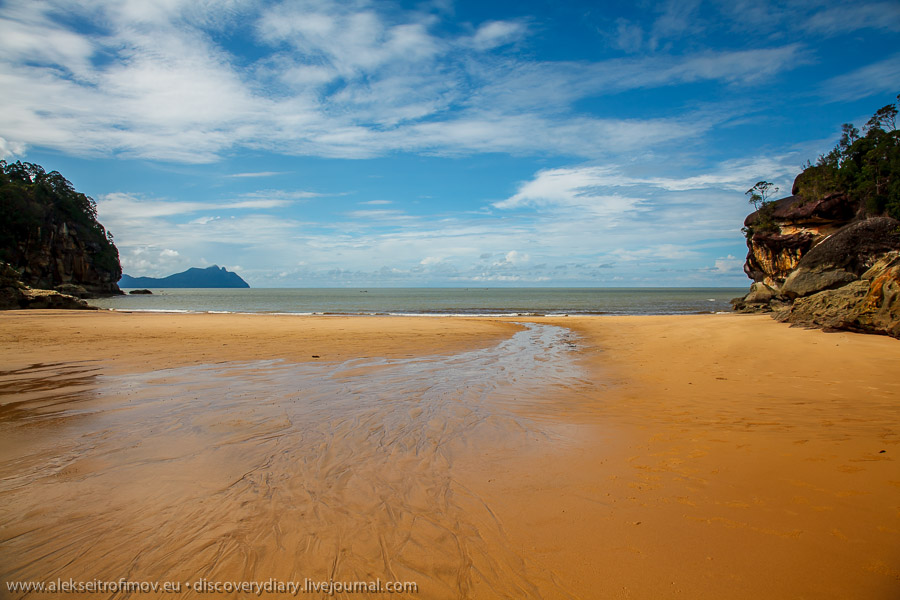 Happy to be there: 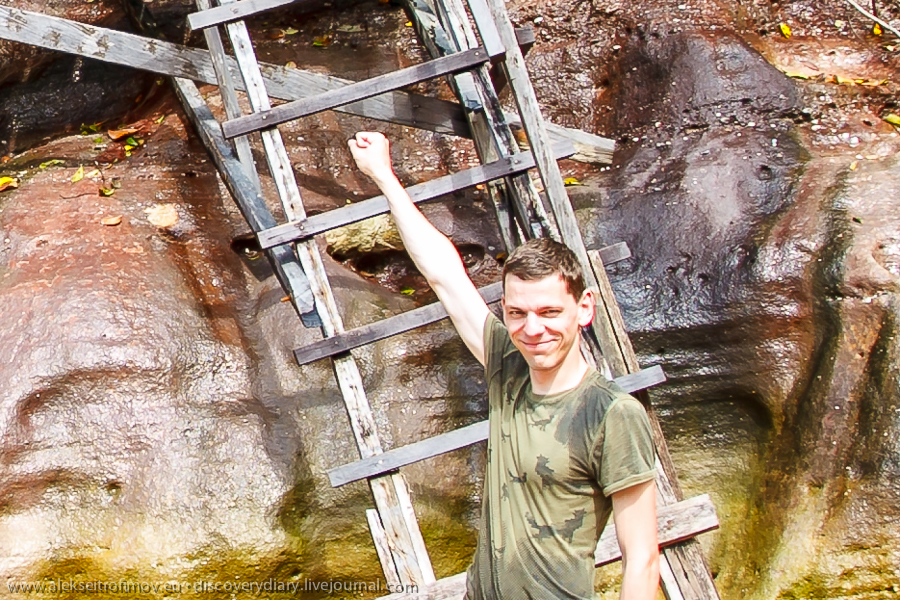 The way back was a lot easier, as is often the case when you already know the way. These park inhabitants greeted us on our way not far from the Visitor Centre: 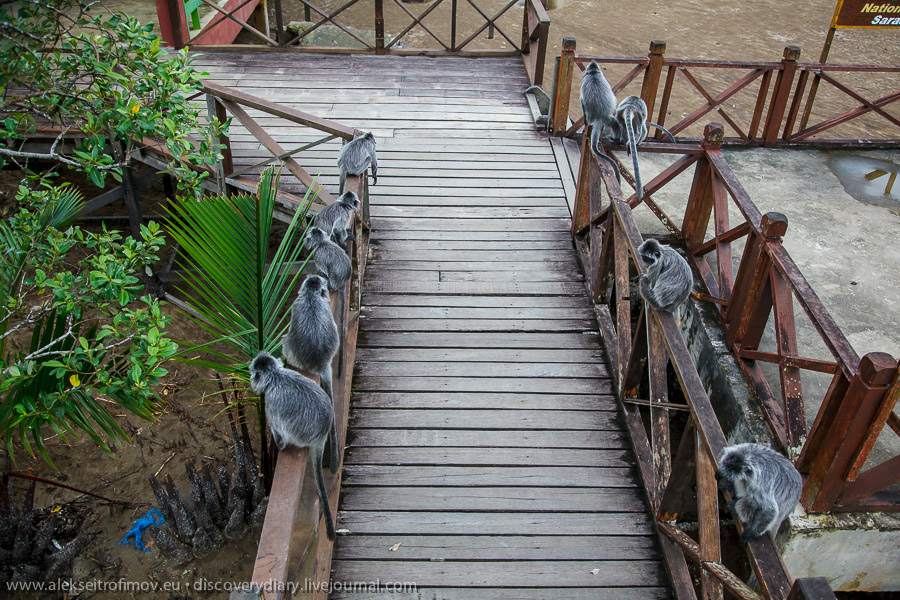 In fact the most famous park dwellers are the proboscis monkeys, endemic to Borneo. We did see a lot of them, but only high up in the trees, so I have no good photos – here is a picture from Wikipedia: This species is more sociable: 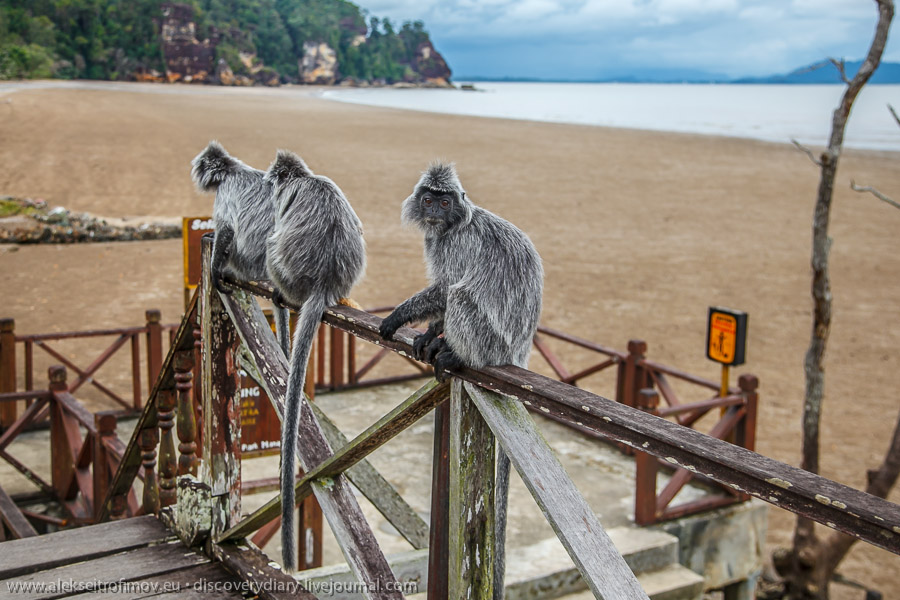 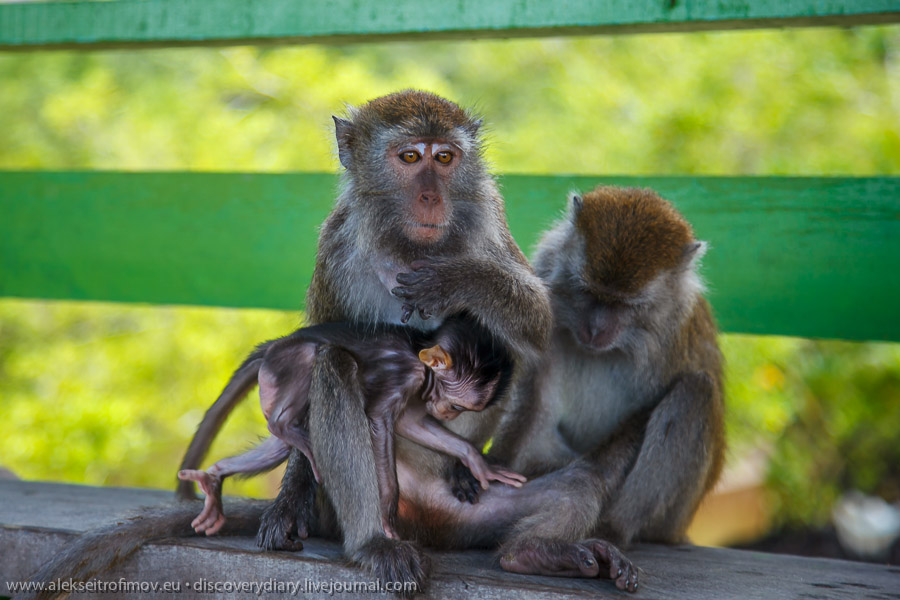 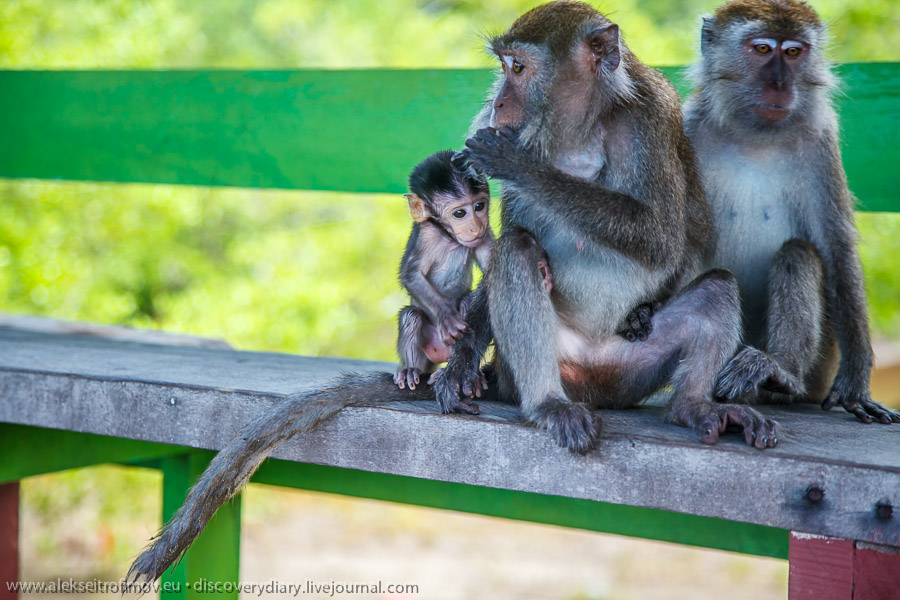 We got back to the centre in time for our boat. The boatmen had already tugged the boat to the shore of the bay and soon we were on our way without incident. As we entered the brown water of the river mouth, I noticed a few objects in the water that looked much like tree trunks. Soon I realised these were crocs! So the jokes about the vests being very helpful in the river were quite to the point. We later read that the crocodiles eat a few locals every year. They live in the fresh water, but can tolerate some levels of salinity, so in fact they can wander in the shallow waters near river estuaries and in this way move from one river to the next. This gave us some food for thought as we remembered our walk in the shallow water of the bay.