From Bangkok I went on to discover the part of South East Asia where I had not been before. My first stop was Laos, country number 69 on my list. I took a flight from Bangkok to Vientiane and received a quick visa on arrival. Which told me immediately this ain’t Bangkok baby: the lady carelessly put the Laotian visa on top of some other stamps in my passport. And there I was, in the capital of Communist Laos.

Laos is the Bolivia of South East Asia. Landlocked, repeatedly defeated by various neighbours, having passed through the jaws of the American war machine and today lagging far behind its more populous and lucky neighbours, ethnically extremely diverse, possessing a number of still hard to access areas of natural beauty. And very very poor. Just like in Bolivia elementary transactions, such as printing out some pages or getting a haircut, suddenly become a challenge. And just like Bolivia, Laos has its special charm that you begin to appreciate in time.

After Bangkok, Vientiane slows you down with its non-existent rhythm and – let’s be honest – its paucity of attractions. Its main streets sport quite a few names in French and in the morning the smell of fresh croissants wafts from street cafés. But apart from that, Vientiane has little to charm a visitor. The main history museum demonstrates a Lenin and a Ho Chi Minh covered with dust. In the mixture of mangled propaganda statements coming straight from the pages of “1984” you can determine precisely zero clear facts of the actual history of Laos. The main message is that the communism won here. But the victory did not follow the North Korean script of totalitarian control. Rather, it was the victory of total indifference. In the museum you can enjoy such important objects as the radio transmitter of Comrade Phomvihane (the first and eternal communist leader), his very modest costume used in the trenches and for example a fan he used on the road.

The entrance to the museum: 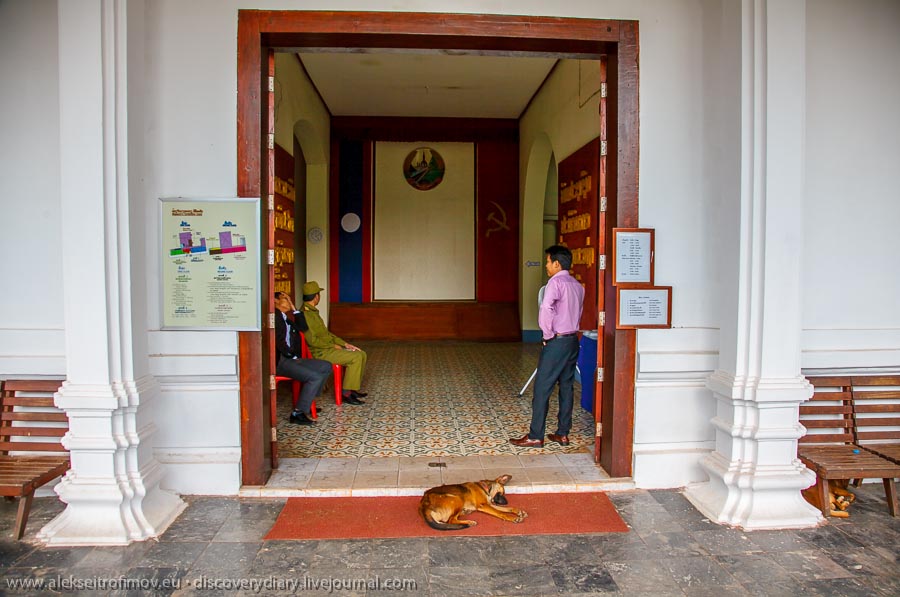 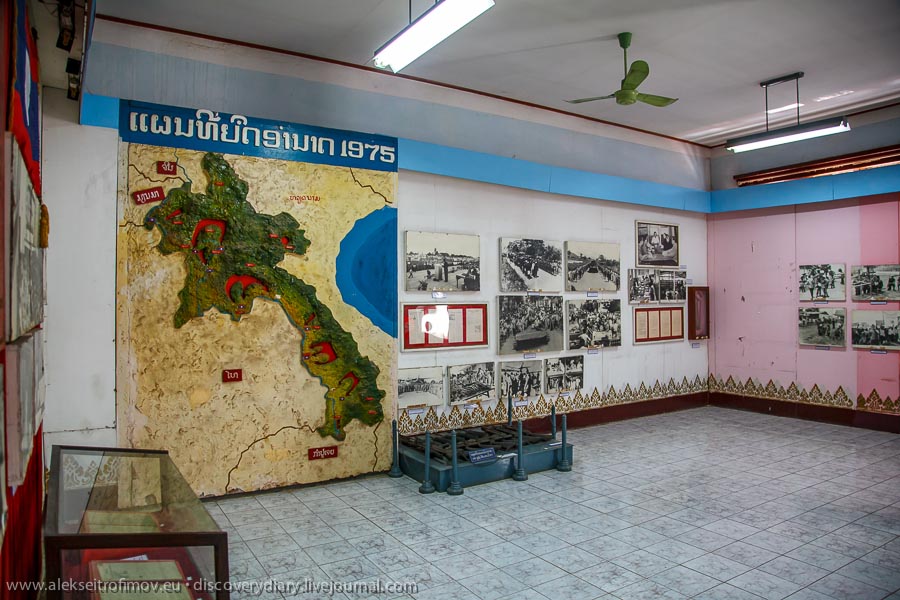 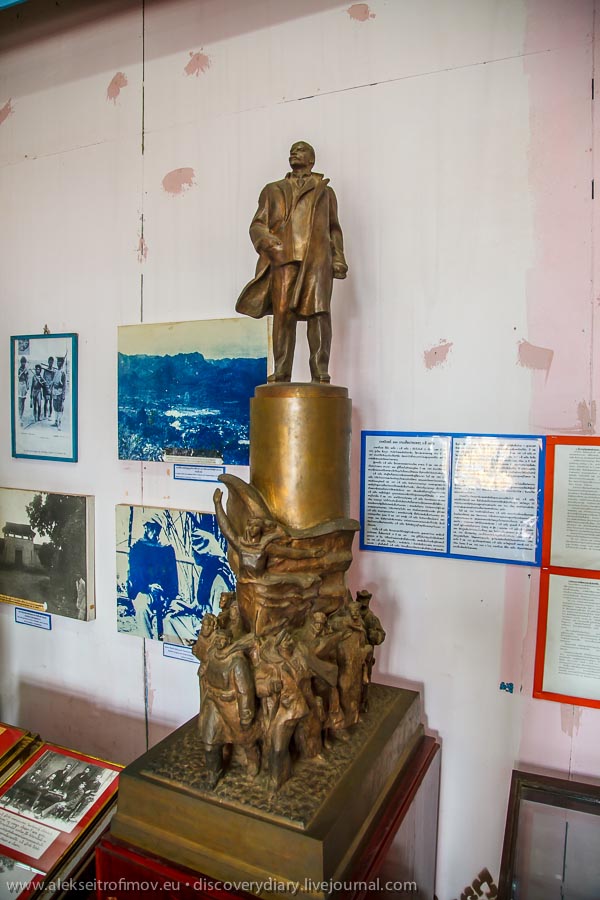 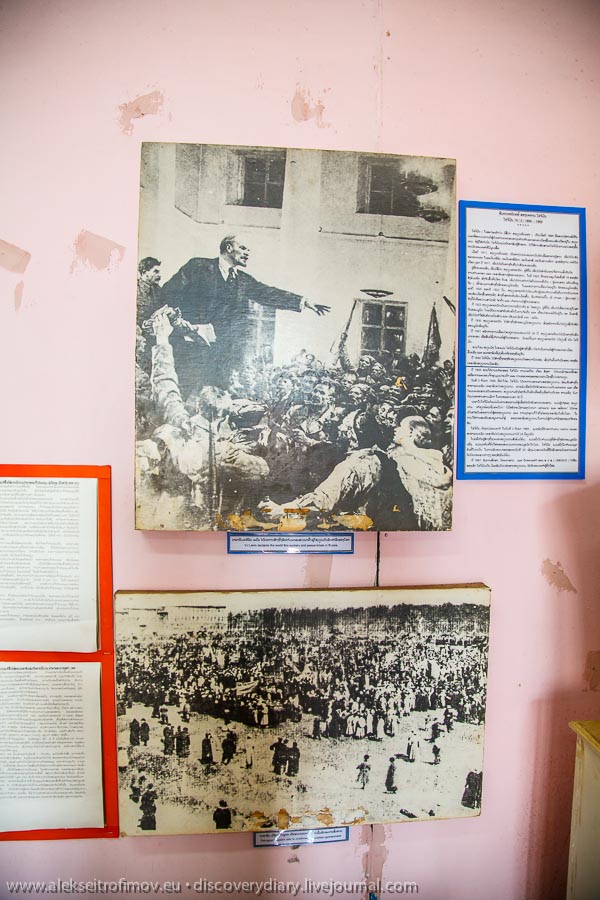 Examples of phrases Orwell would have appreciated. 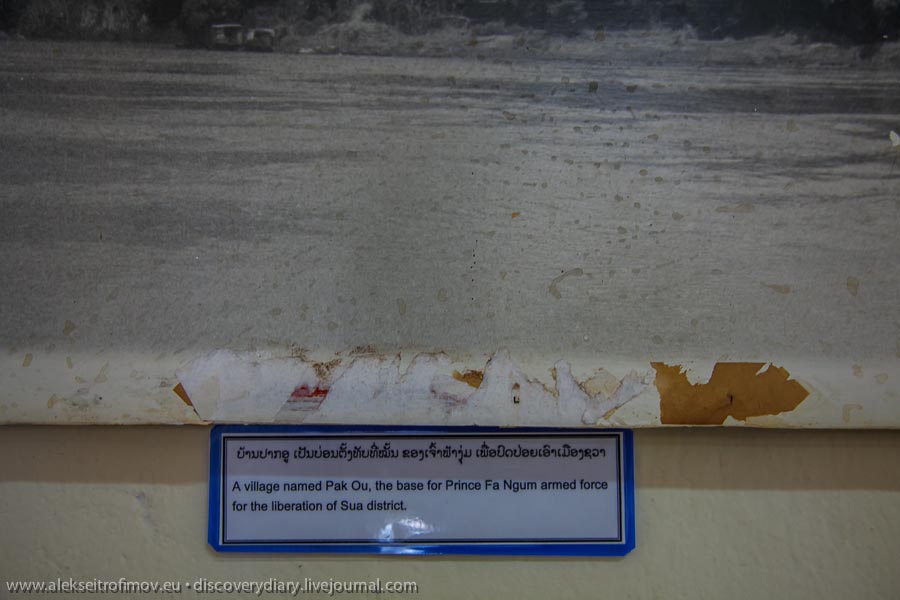 “Comrade has a friendly chat with the peasants”. They are clearly enjoying! 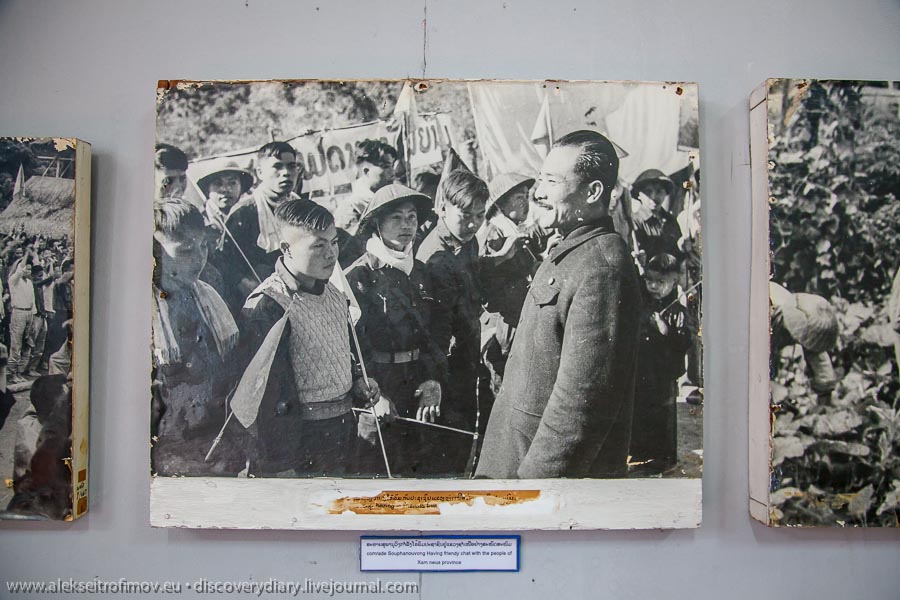 A place that leaves a much more lasting impression is the so-called COPE Visitor Centre. COPE is a local NGO that helps the victims of the horror that is UXO. UXO stands for “unexploded ordnance”, i.e. the bombs that have not exploded when first dropped. This is a horrible heritage of the Secret War that the Americans waged over Laos with communist Vietnam. The War lasted for nine years in parallel to the conflict in Vietnam itself. According to the terms of 1954 agreement signed in Geneva regarding the status of Laos, Laos was considered a neutral state. For this reason formally the Americans denied all involvement in Laos. On numerous occasions Nixon vehemently insisted that no American soldier set foot in Laos. Simultaneously an American plane would drop a new portion of bombs onto Laos every 8 minutes. In nine years this led to about 5 million tonnes of bombs dropped. About 30% of those have not exploded on impact and keep exploding to this day, as locals accidentally stumble upon them or even try to disassemble them for scrap metal. Professional technician teams work on demining the bombs. In the Visitor Centre I saw a touching documentary about an Australian team that trains local teams to demine bombs. COPE’s main activity is to produce and supply prosthetic devices to people disabled by the UXO explosions. A visitor café in the Visitor Centre is called “Karma Café”. How about that. 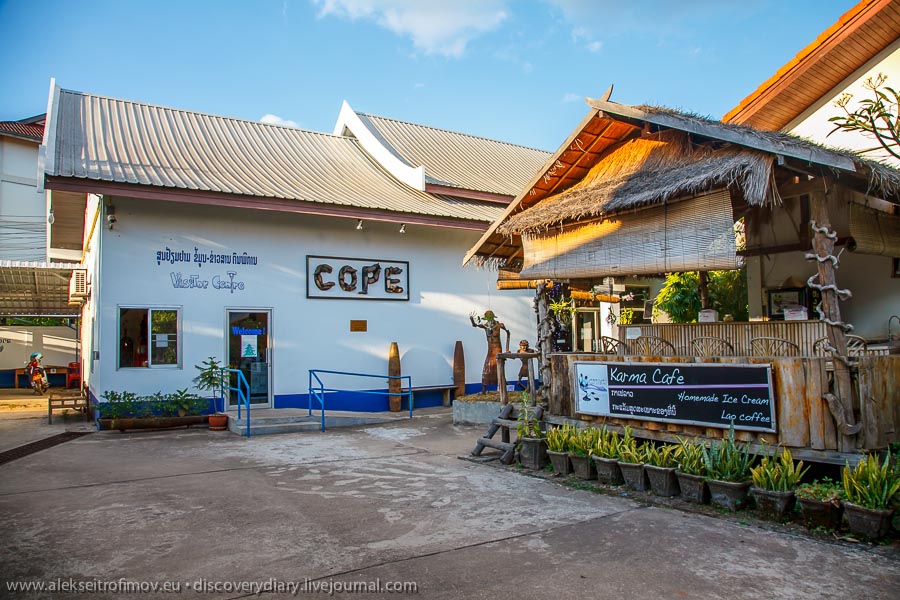 The entrance to the Visitor Centre : 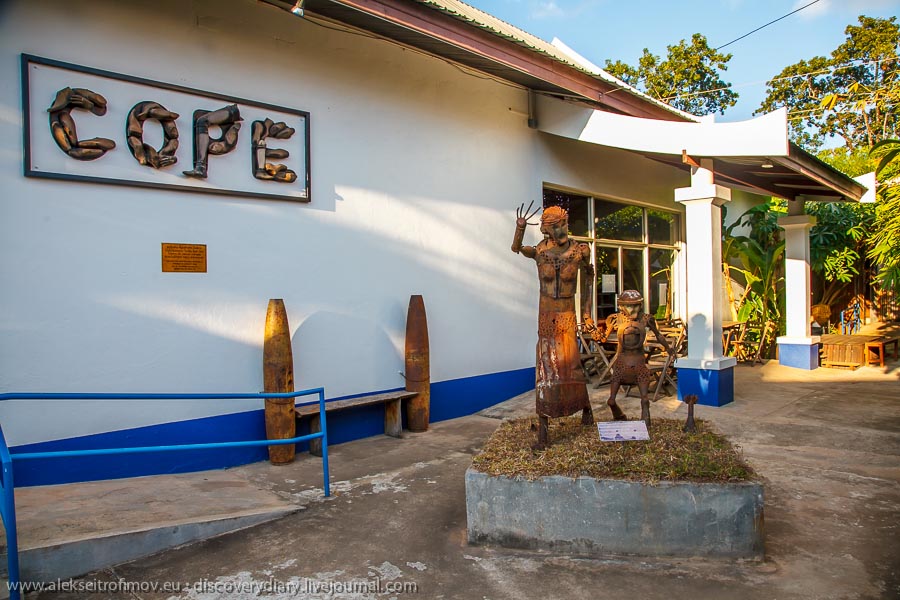 These sculptures are made from pieces of demined or exploded UXO: 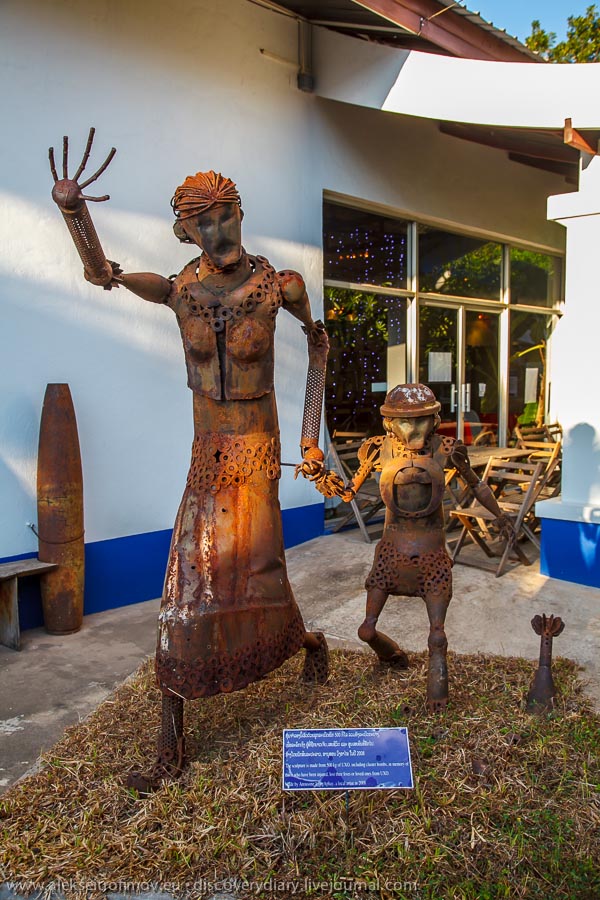 This is how the bombs dropped by the Americans looked. First these large tubes were dropped. The tubes contained numerous small bombs (which are called “bombies” in Laos) which were then released from the tubes in the air, thus covering maximum territory and hitting maximum number of targets. You understand that in Laos there was no particular war industry, so the targets were principally human. 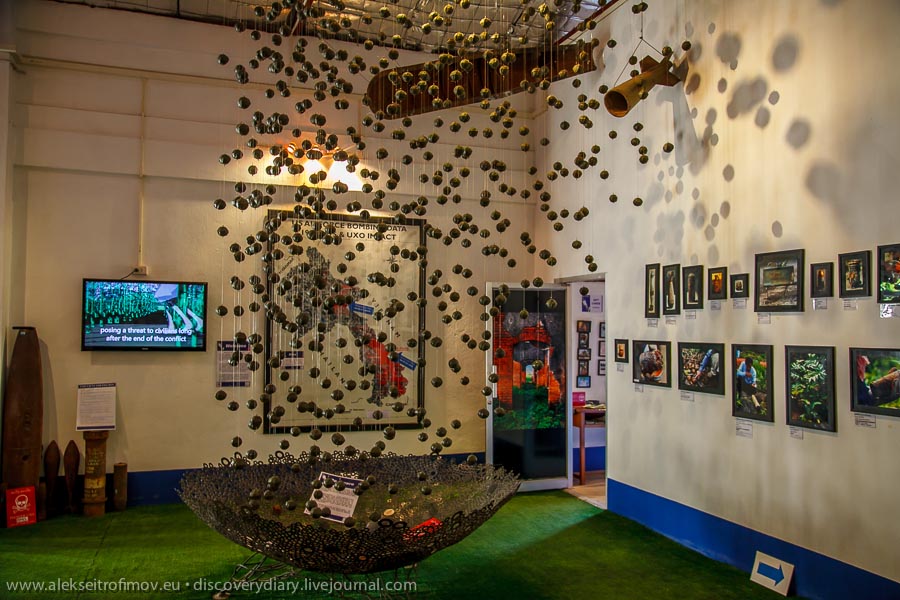 Protheses that are no longer usable: 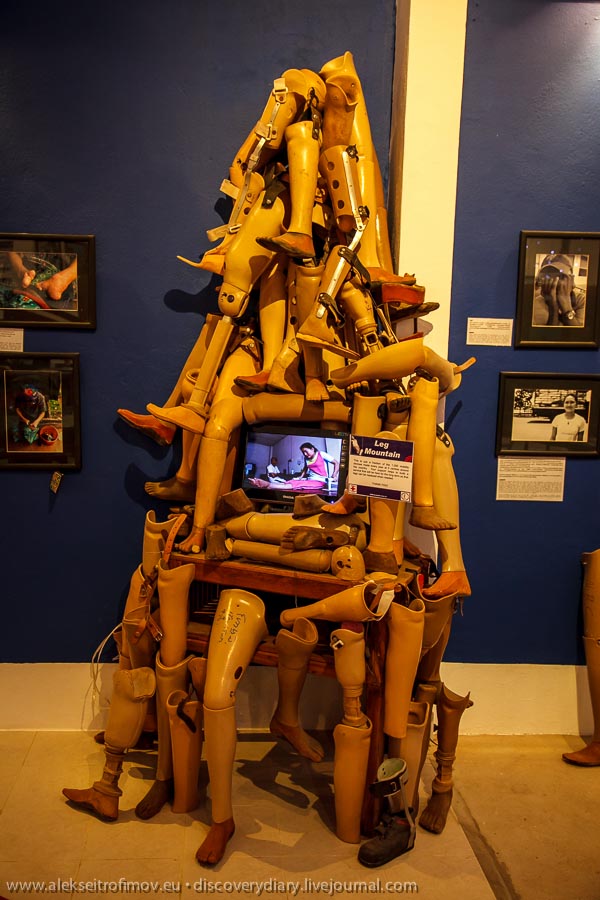 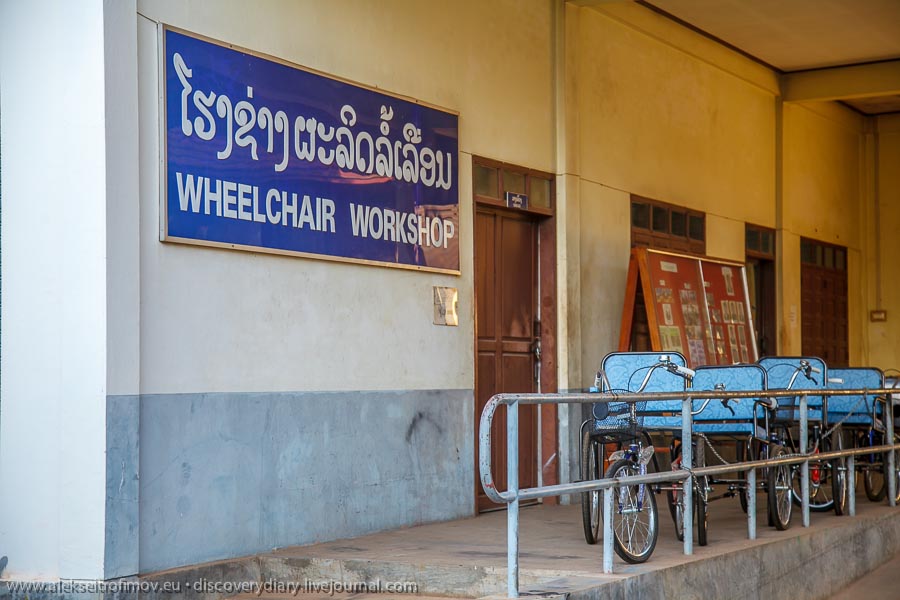 This is a story of a family that got blown by a bombie that happened to be under their fireplace. 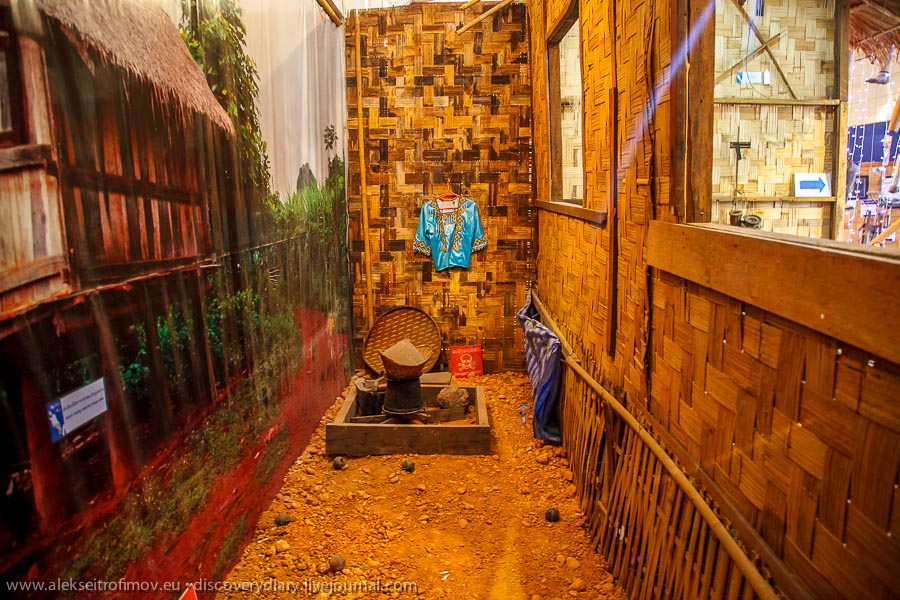 The main message of the centre. 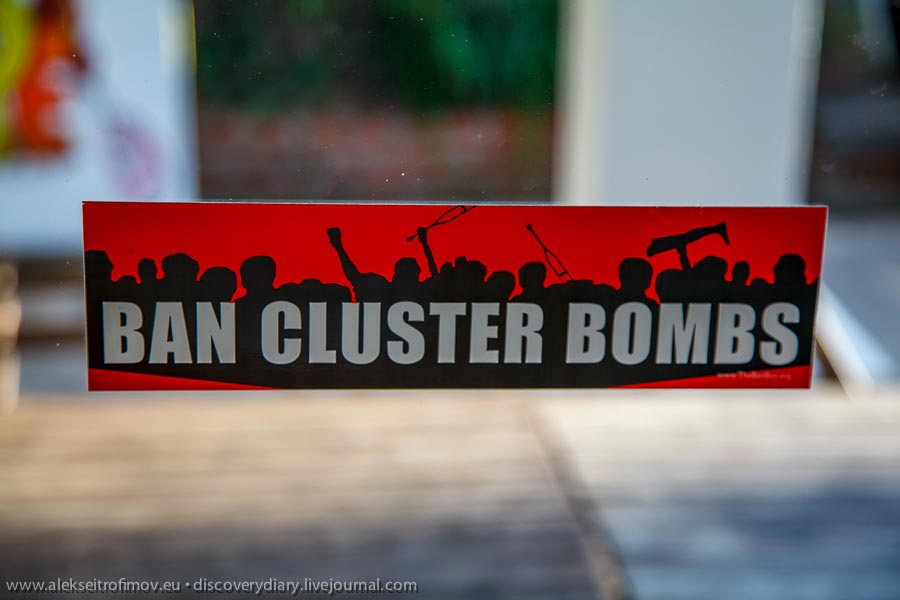 Walking back to the centre of Vientiane I came across this group of locals playing petanque (another French touch). The petanque balls looked so much like the little bombies in the centre… I shuddered. 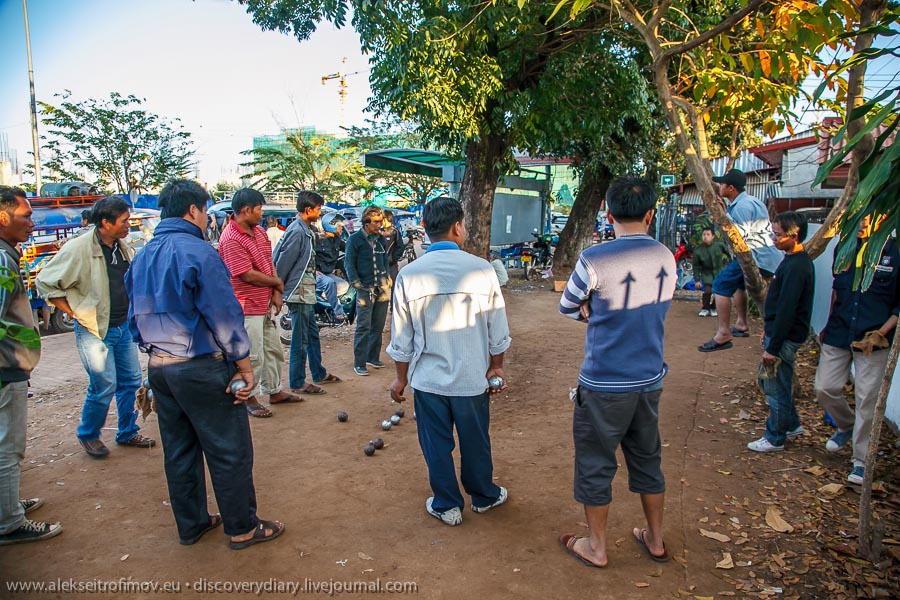 Perhaps the main Vientiane historical attraction – a huge stupa Pha That Luang covered in gold and 45 metres high. It is said that it contains a Buddha’s bone. The stupa was destroyed during various wars and was restored only in 1960. It is about 4 km from the centre of Vientiane – so you have to exercise your bargaining skills with tuk tuk drivers. 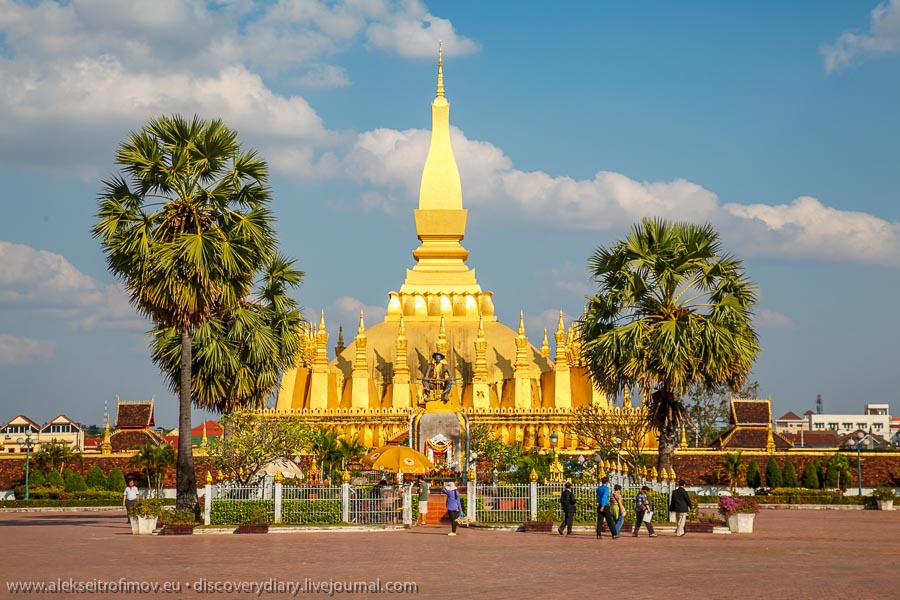 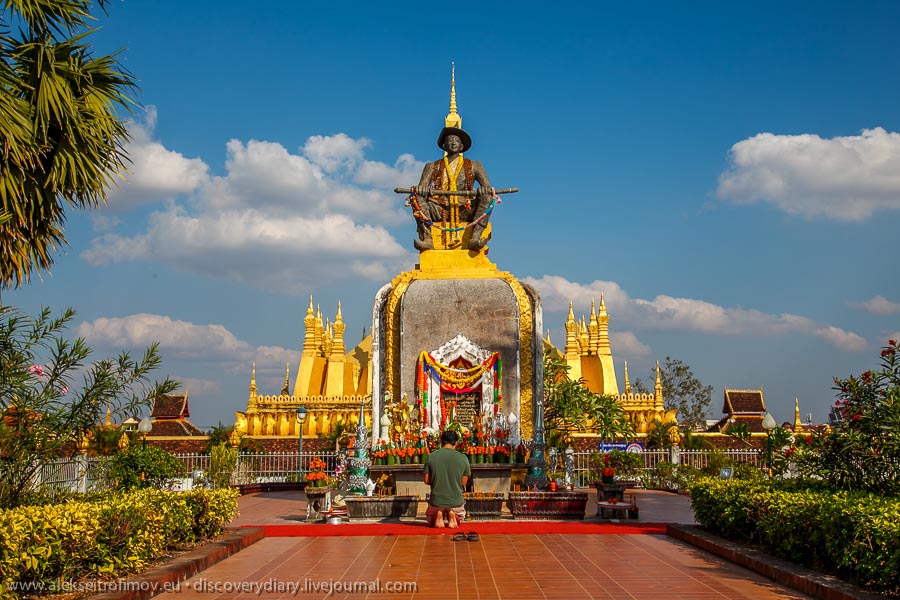 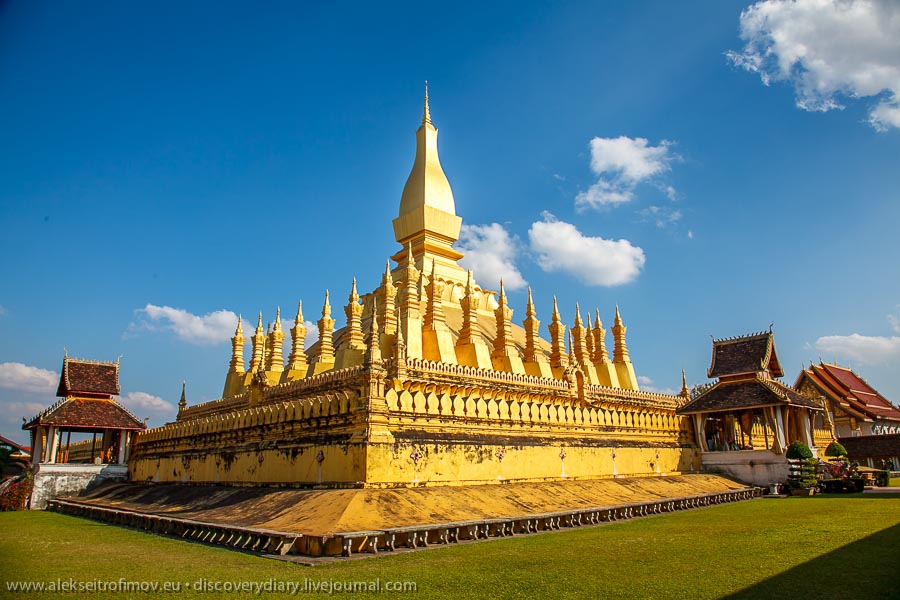 Presidential palace. As you can see, Laos takes great pride in the condition of its roads: 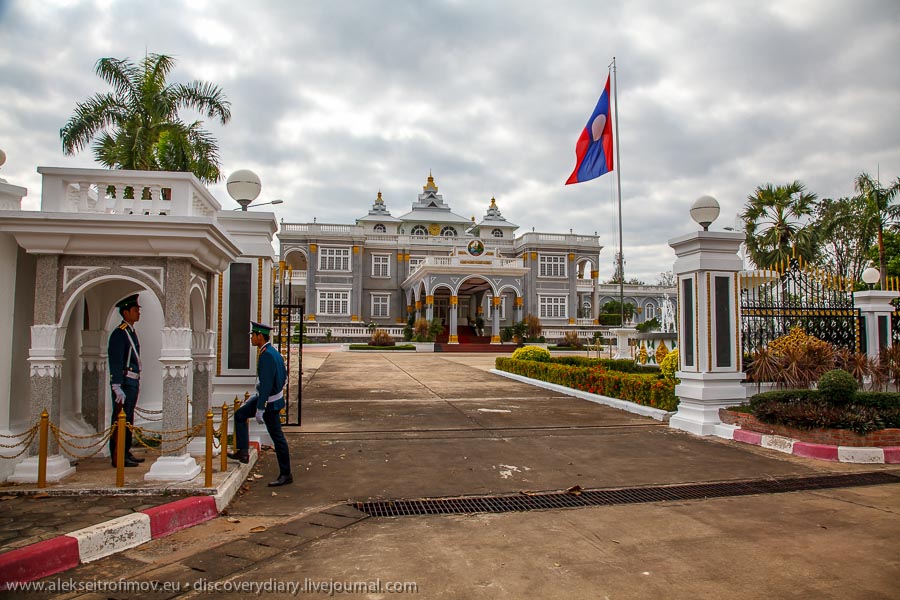 The entrance to Wat Si Saket, the only temple not destroyed by the Thai armies when they took Vientiane in the beginning of 19th century. 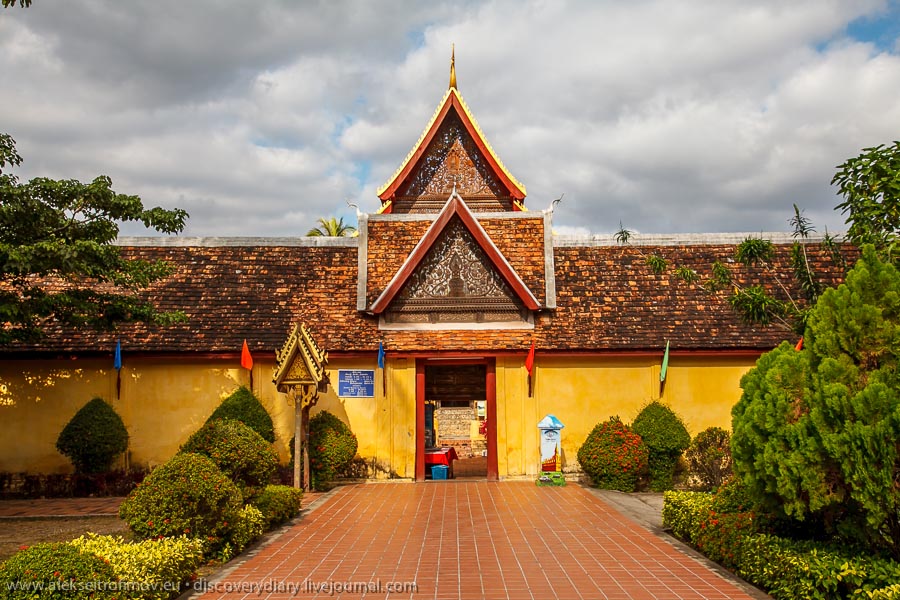 Inside the main sanctuary: 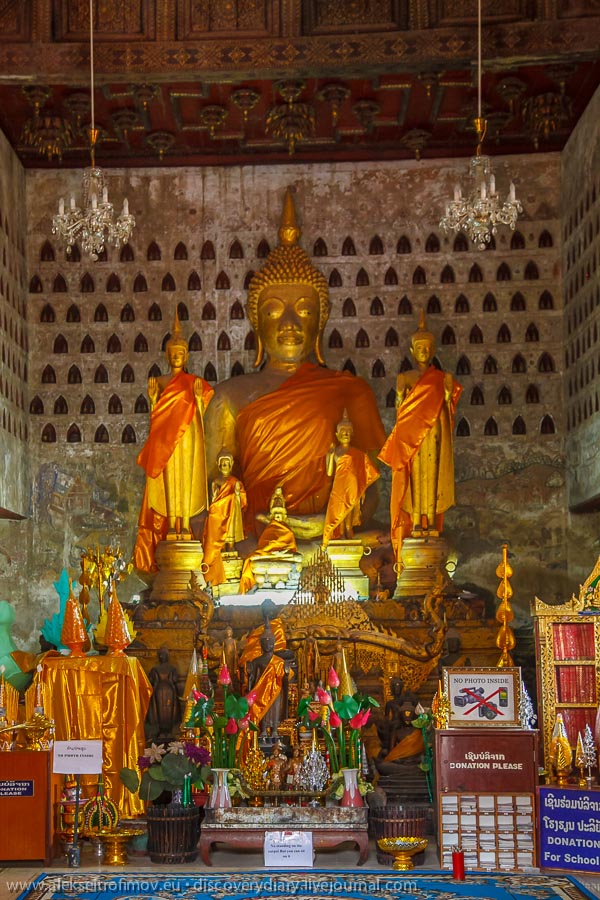 The inner temple is surrounded by a courtyard and a corridor full of impressive Buddhas: 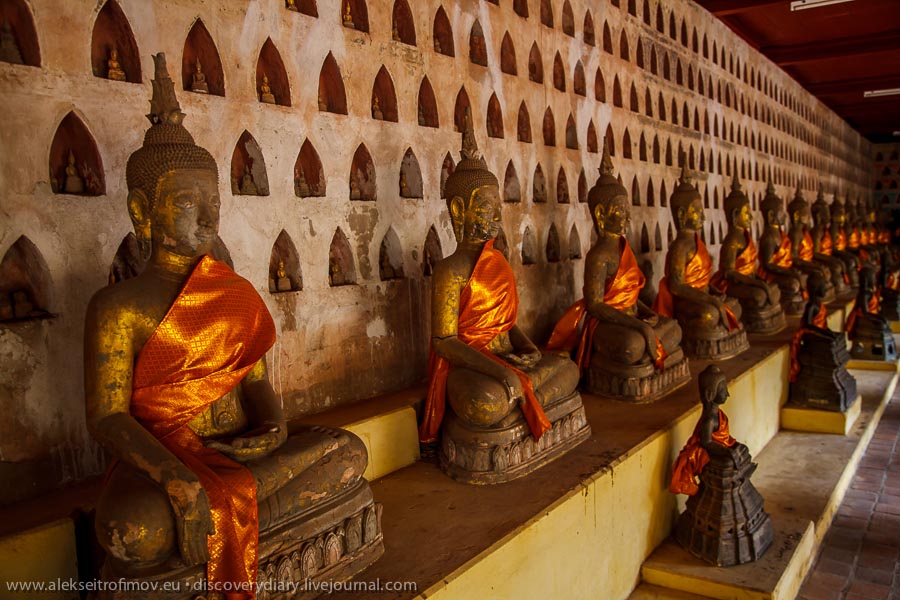 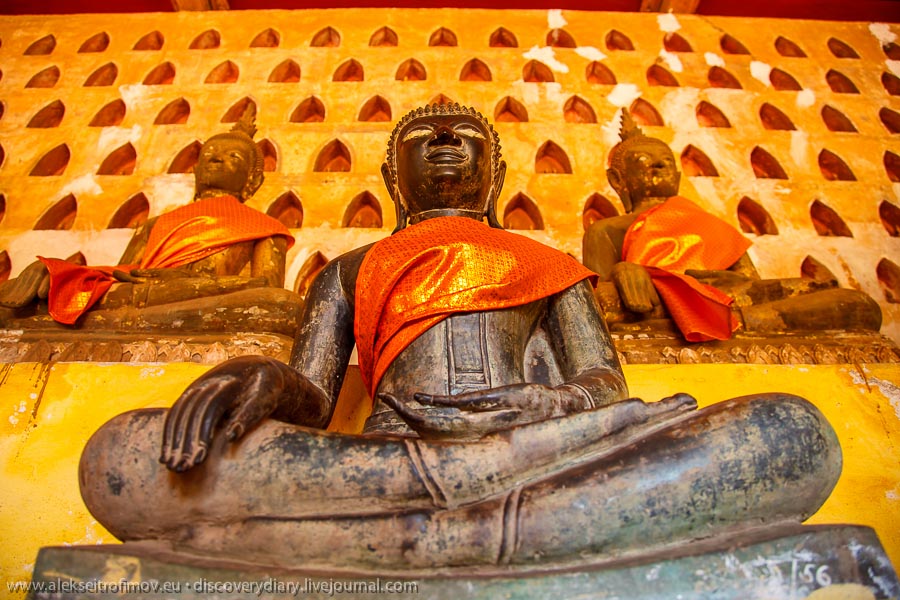 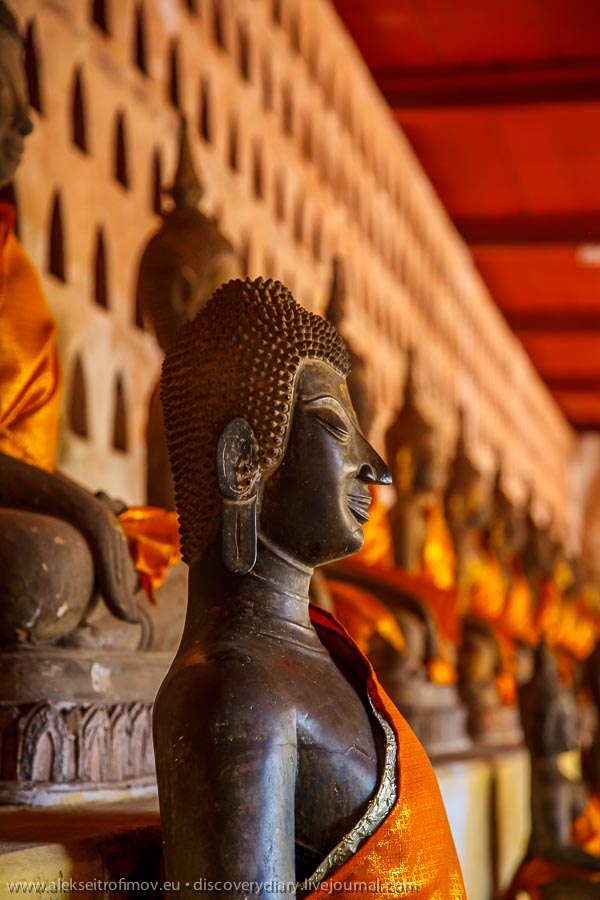 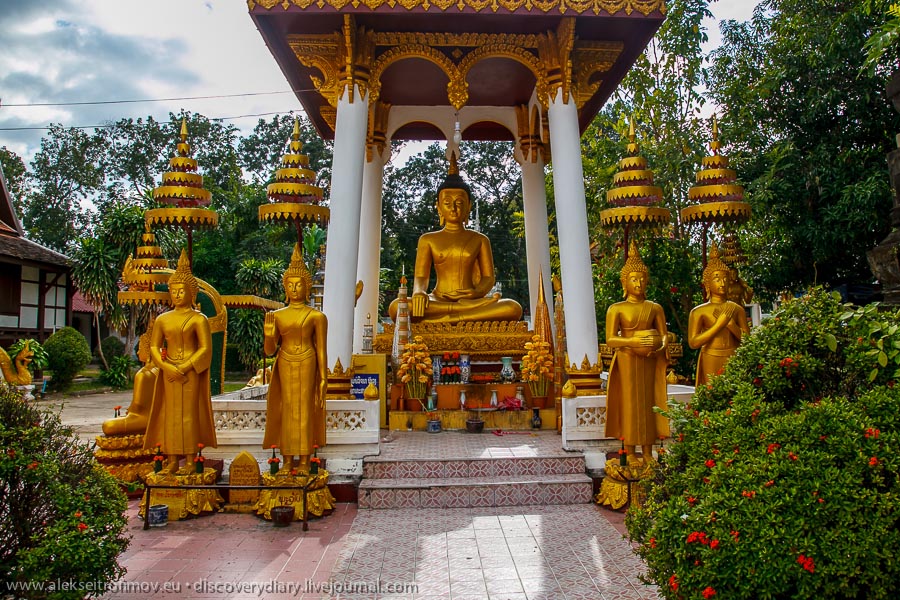 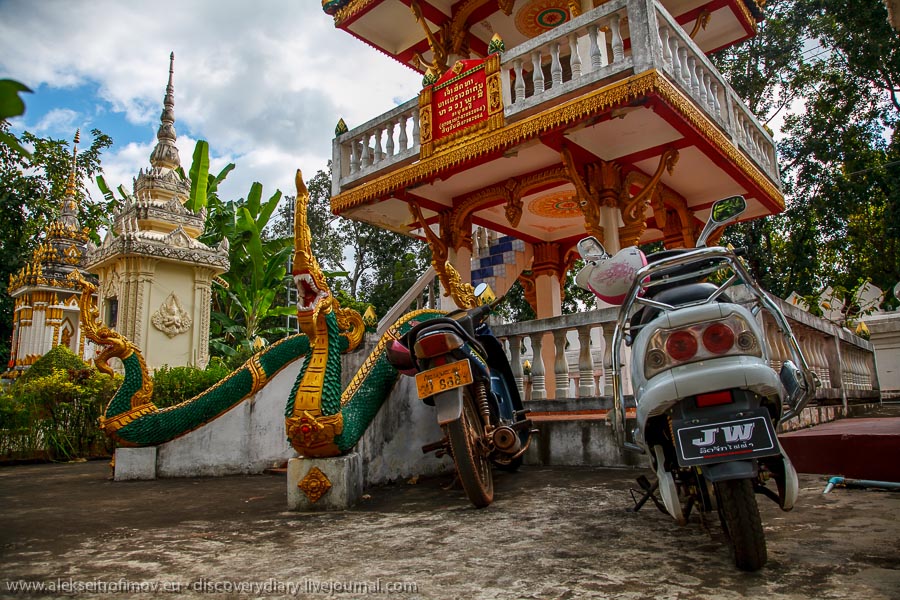 Next to Wat Si Saket there is another building, a former temple, today a museum containing countless Buddhas. 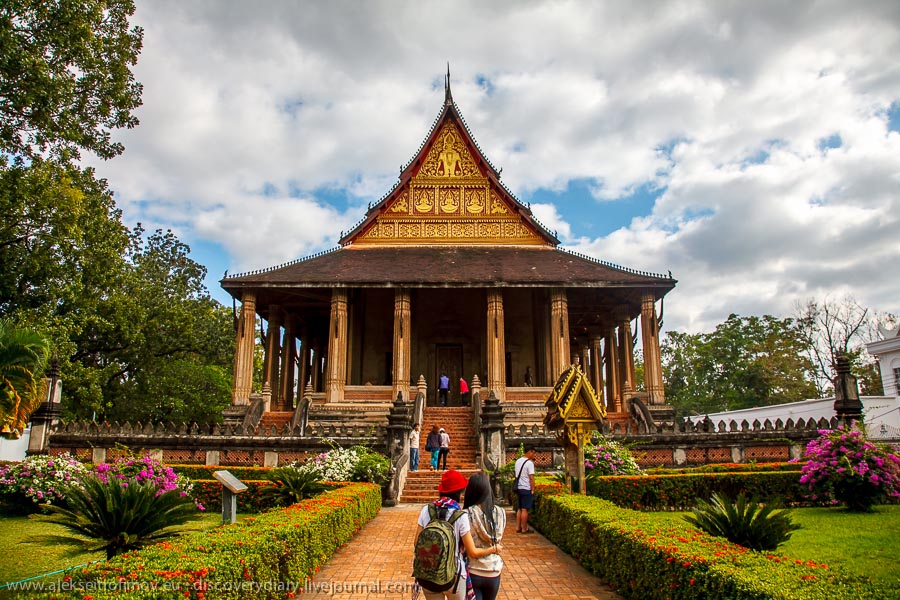 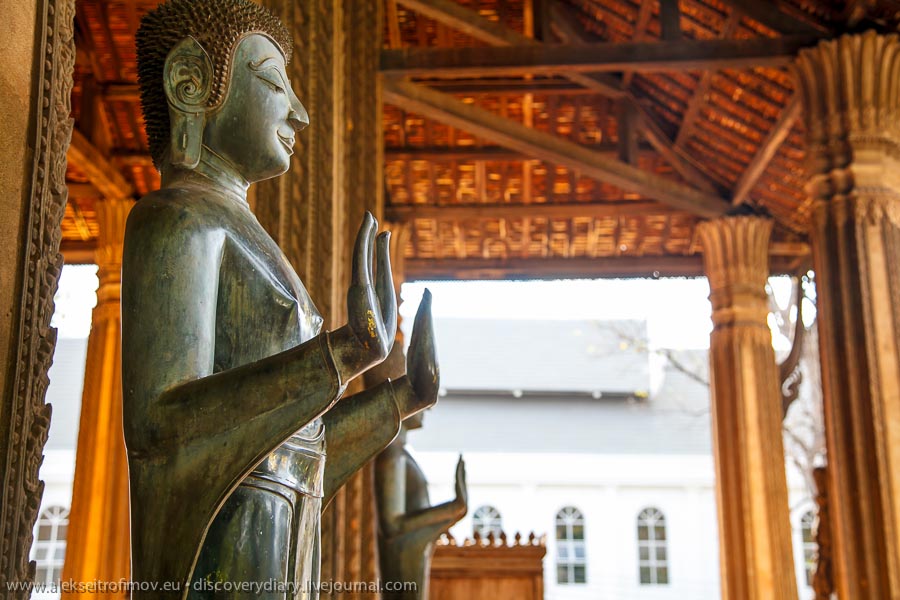 4 thoughts on “Vientiane, the capital of Communist Laos”