Antigua and Barbuda was the first “independent” country that we visited on our cruise. I put “independent” in reversed quotes for the simple reason that in the Caribbean the notion of independence is very relative. In many ways the island mini-states here are closely tied to their former colonial masters, and their very economy is such that it’s built around visitors and the vast majority of consumed goods are imported. And yet formally Antigua and Barbuda is perfectly independent. The total population of this country is 80 thousand people, 98% of which live on the larger of the two islands – Antigua. Antigua plays the role of a transport node of the Caribbean – even though there are only cursory regular airplane connections between the various islands, the flights that exist tend to all connect right here in Antigua airport.

But the main treasure of Antigua are surely its beaches. They say there are 365 of them – one for each day of the year! It’s a kind of a long tale, of course, and yet it highlights the fact that virtually of all of the island’s shoreline is one endless beach. From above Antigua looks like a huge blotch of ink delineated from everywhere by virtually uninterrupted beaches. With our cruise ship acquaintance we headed to his favourite beach in the North of the island. 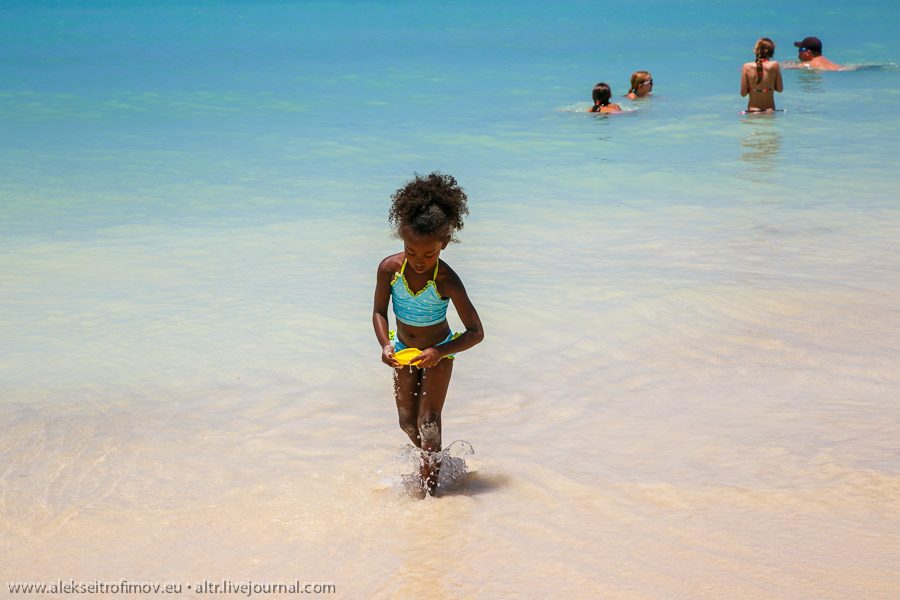 Welcome to Antigua and Barbuda! 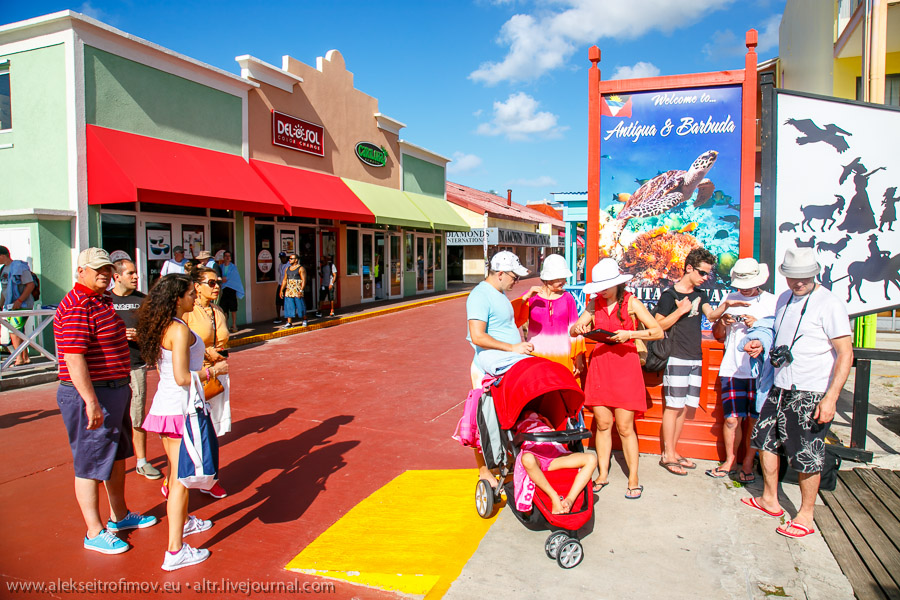 Most Caribbean islands lack public transport of any use to the visitors – you are gently pushed towards using taxis. On Angitua you pay not per ride, but rather per person driven. We paid 4 dollars each one way. 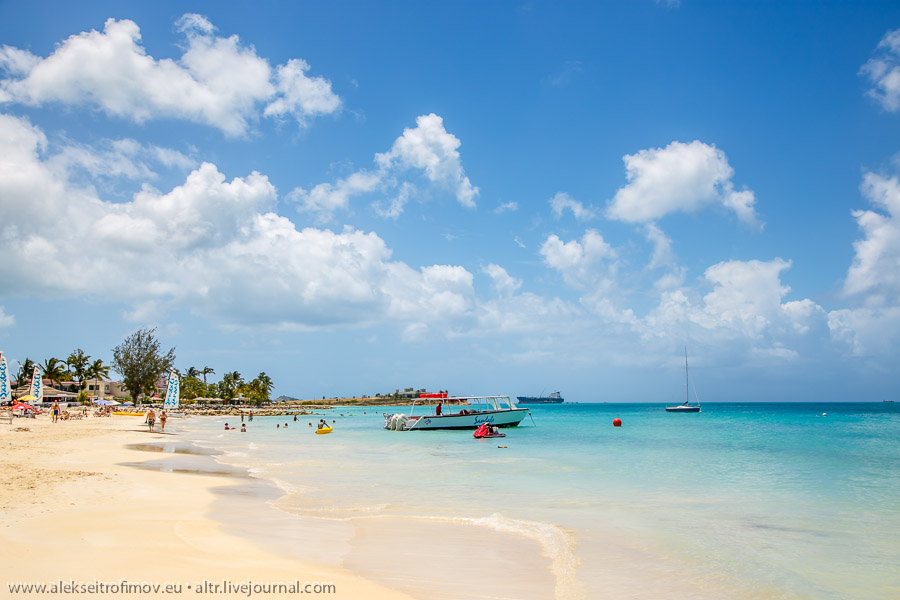 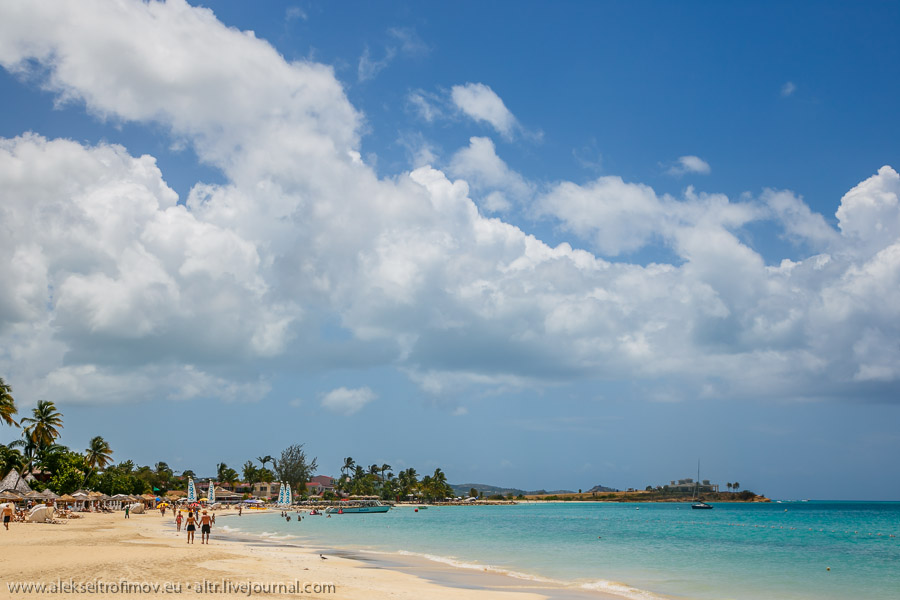 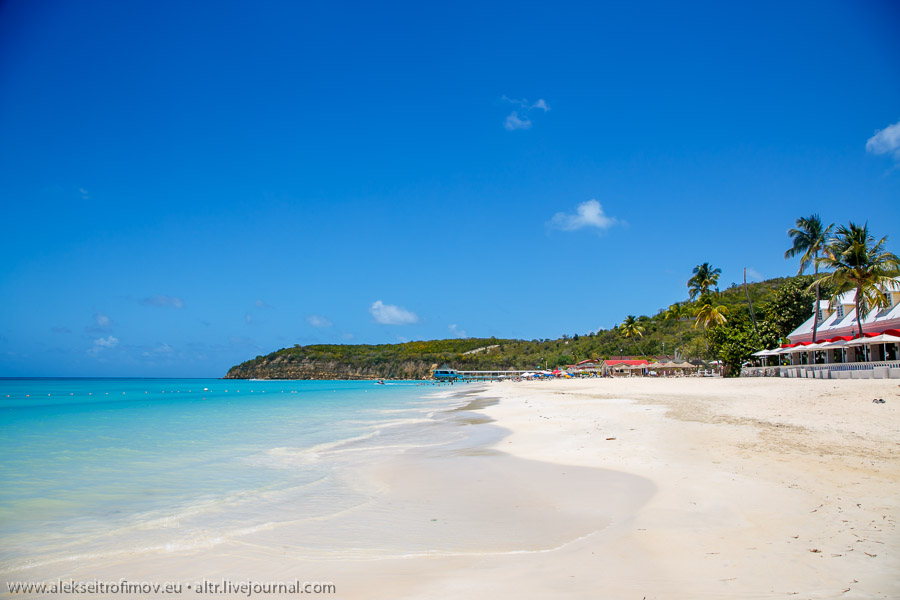 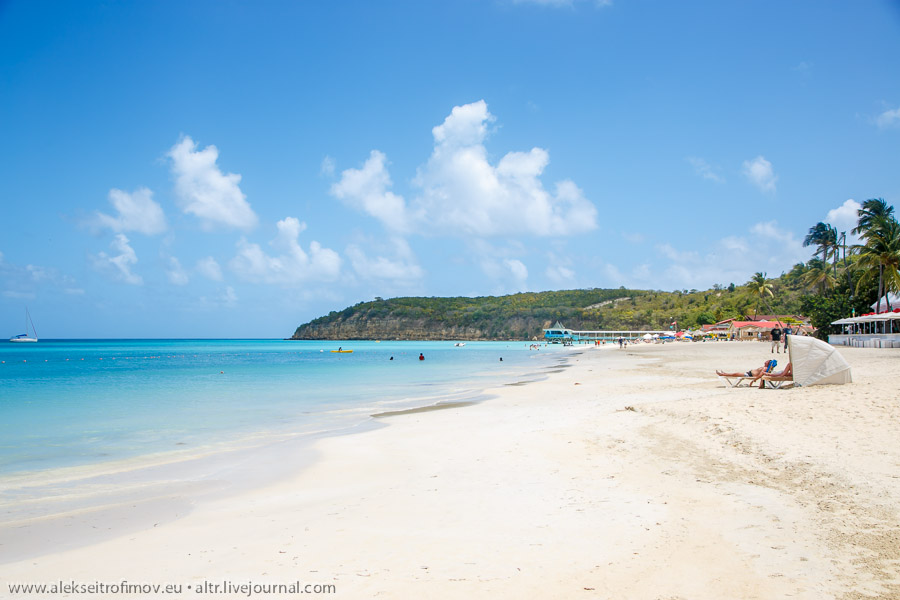 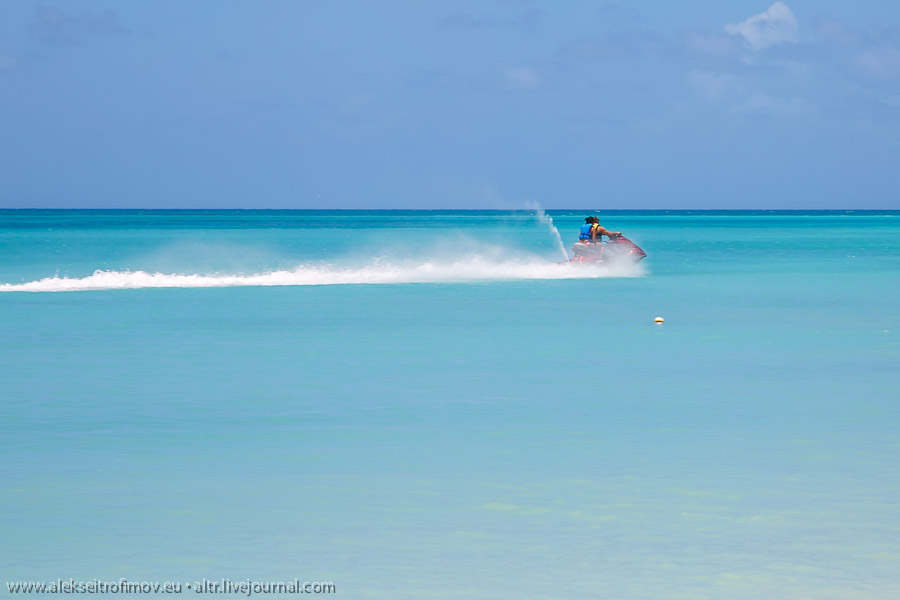 Even though it looks like paradise on Earth, in reality even to lie there for several hours was a challenge! Not only because personally I’m not a big fan of beaches. Truth is the sun on that particular beach was simply a killer. Even you lie under a sun umbrella, as we did! The sun is reflected in every direction from the water and the whiteness of the sand – so you can set the world record for burning your skin, 5 minutes is sufficient. On the other hand the water on that beach was shockingly cold. Even though the locals seemed to spend hours in it, as for me, I would start to freeze after five minutes max! Must be the steep decline to the ocean that’s responsible for this. Still in my mind it was really inferiour to the Dominican Republic, where I could spend days in the water as it was so pleasant. 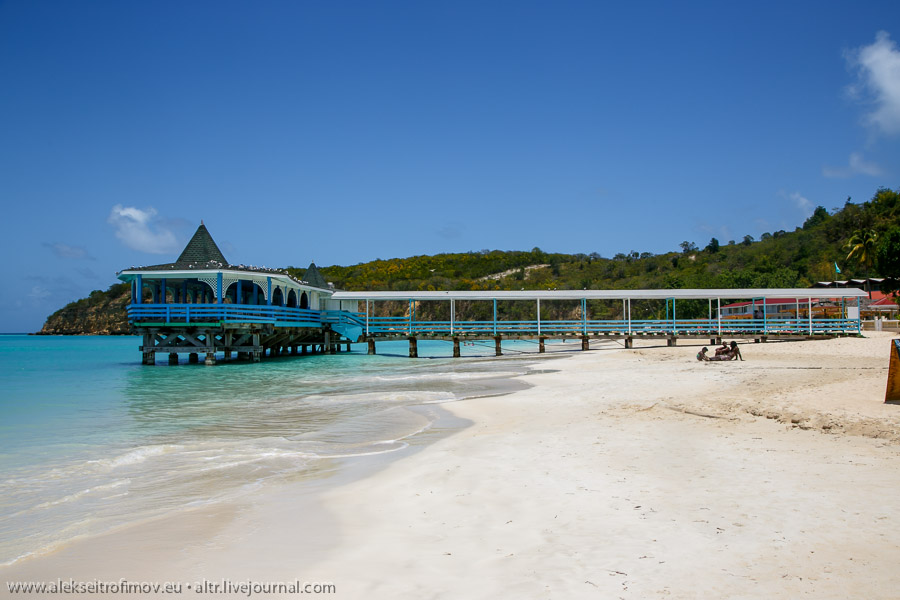 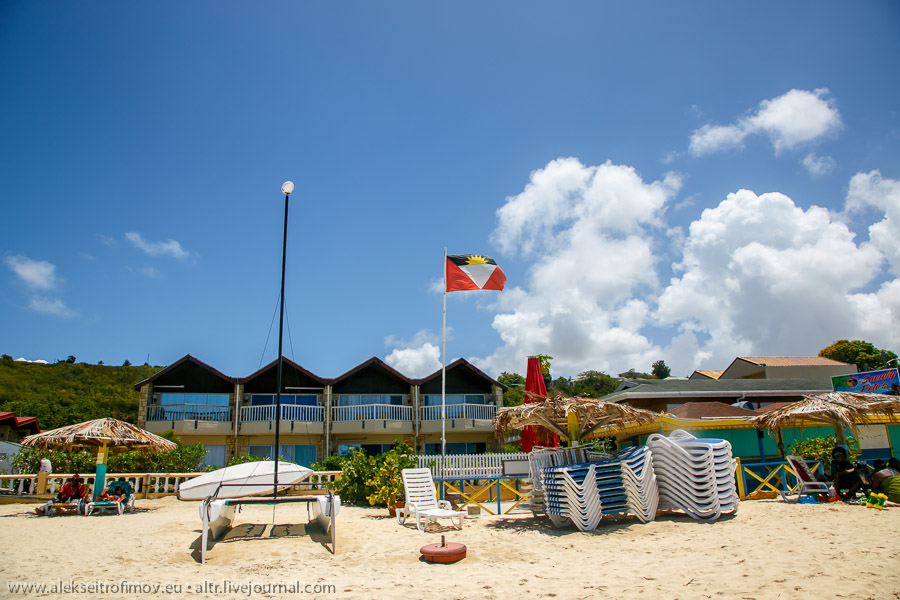 On the way back I asked the driver to drop us out in the centre of St. John’s – the capital of Antigua and Barbuda. Normally the tourists would see it for 2 minutes on their way back to the ship. It was a holiday and so the town’s streets were empty and everything was closed. The town had a rather depressing feel, not least due to the obvious poverty. 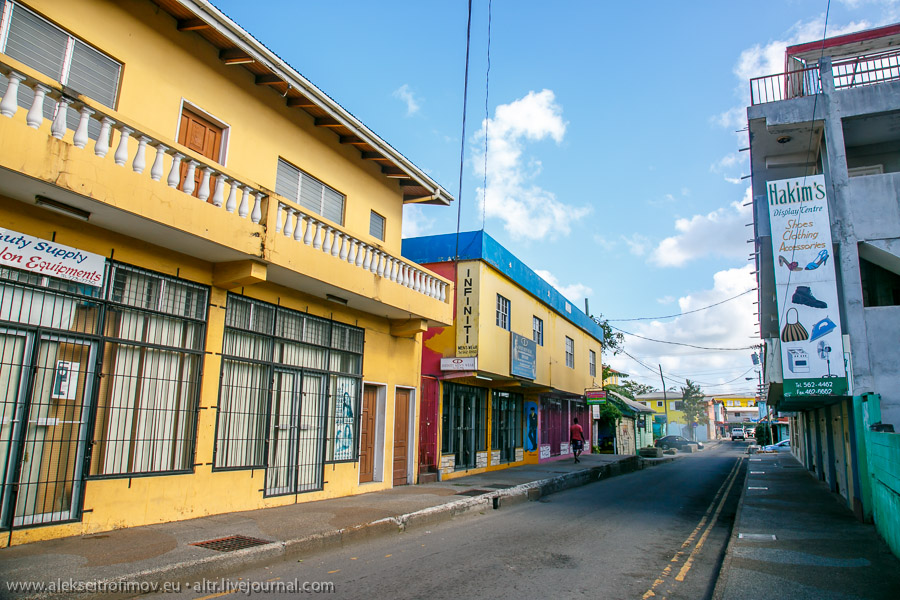 My eye did come across a couple of elegant colonial mansions. 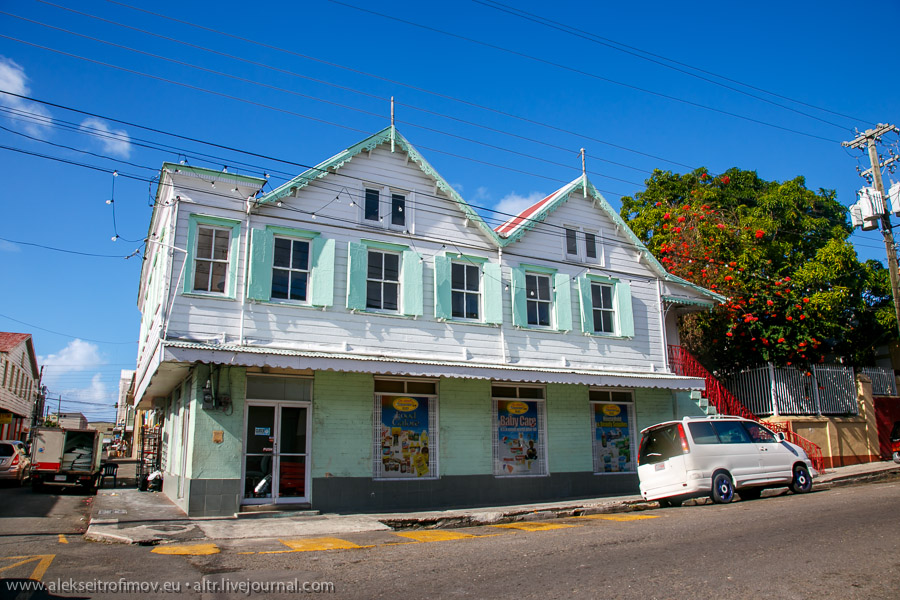 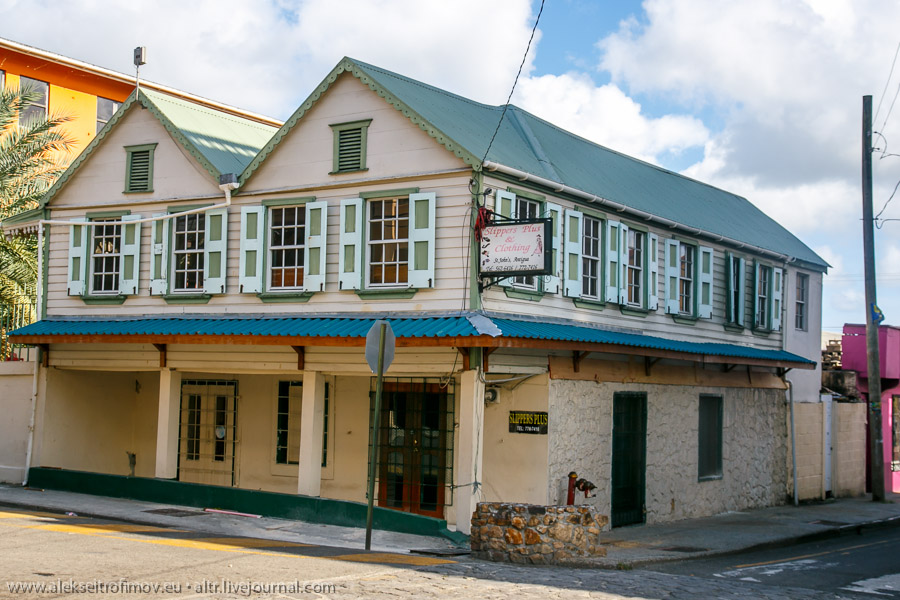 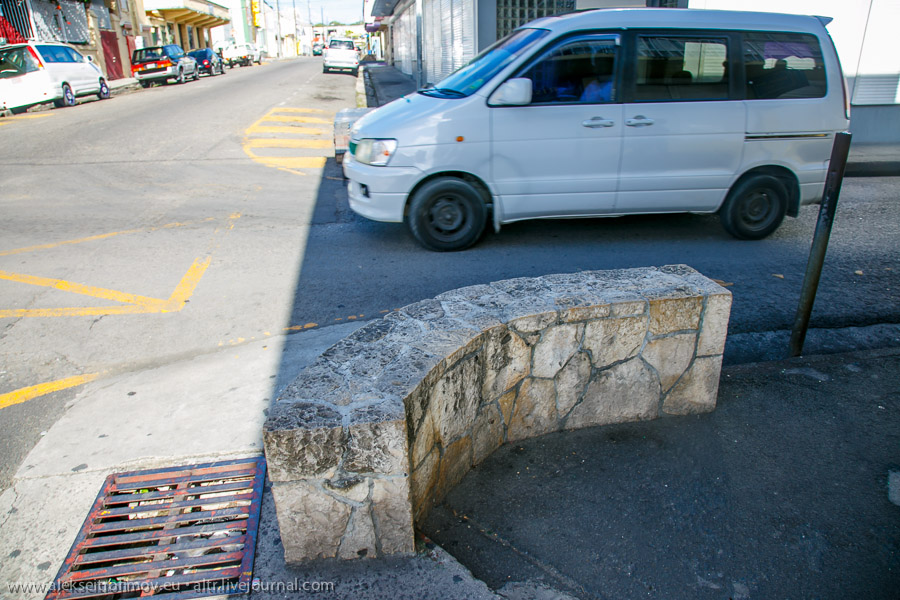 Some life did exist by the cruise ship quai. These gentlemen attack all the arriving tourists offering their polyvalent services at the prices you could imagine. 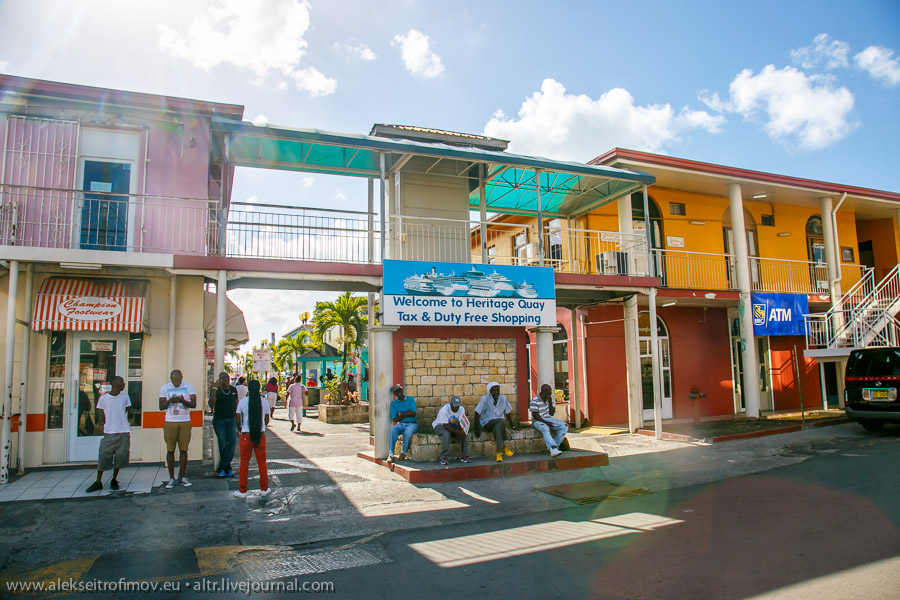 A Potemkine village for tourists. 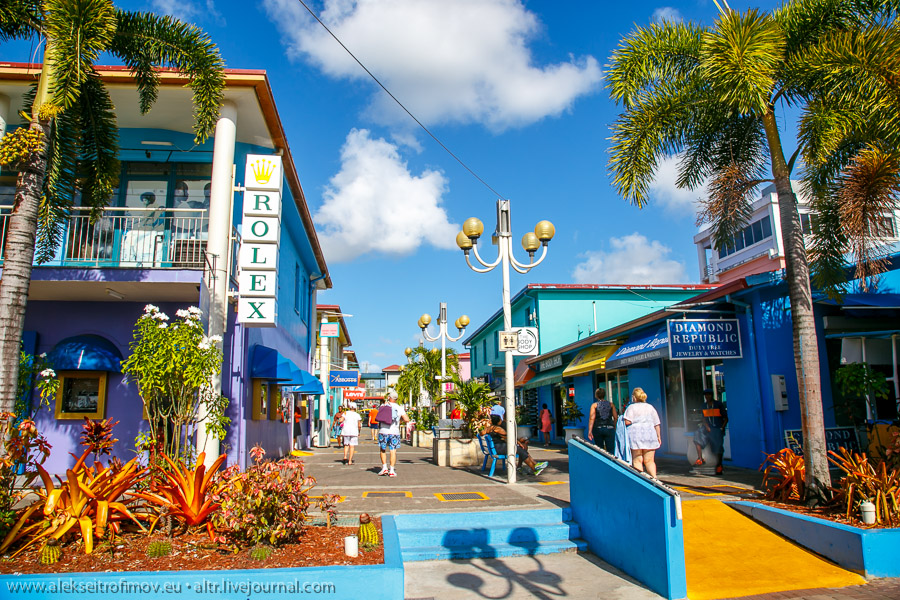 Our ship in the background. 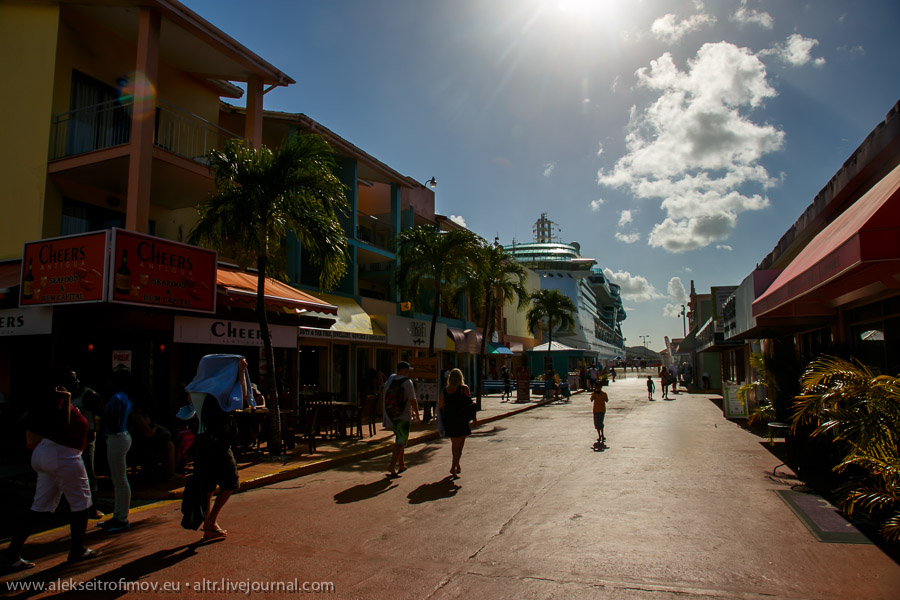 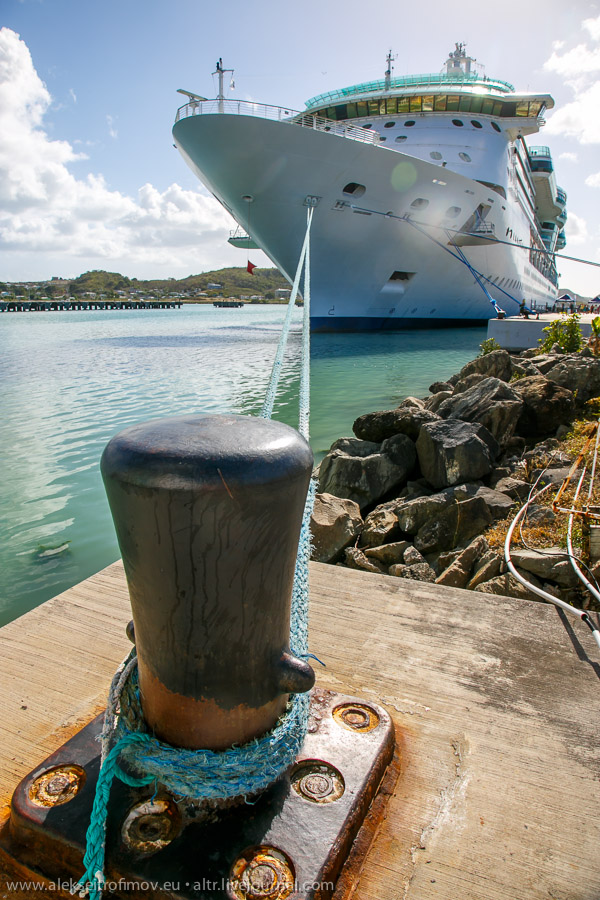 Again I photograph the island from the top deck in the rays of the setting sun. 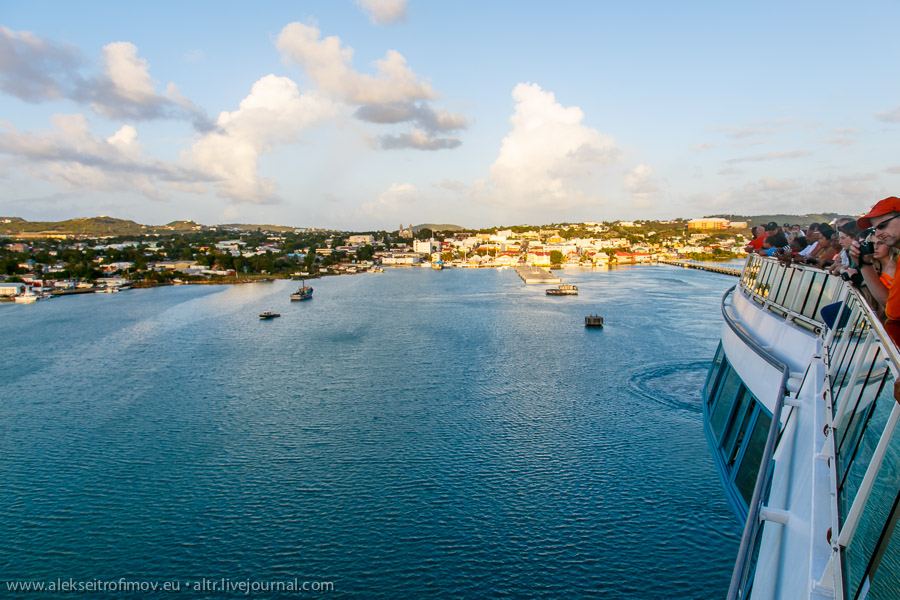 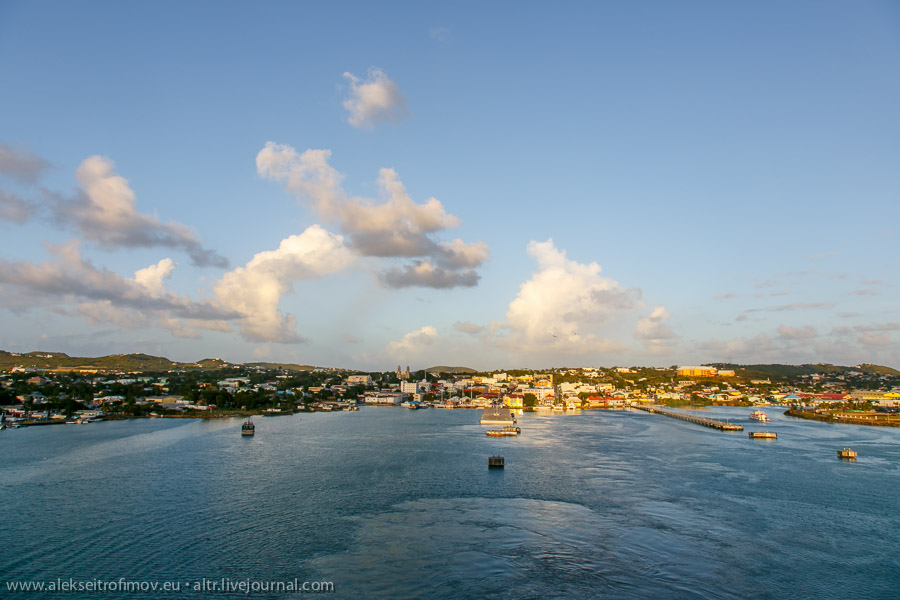 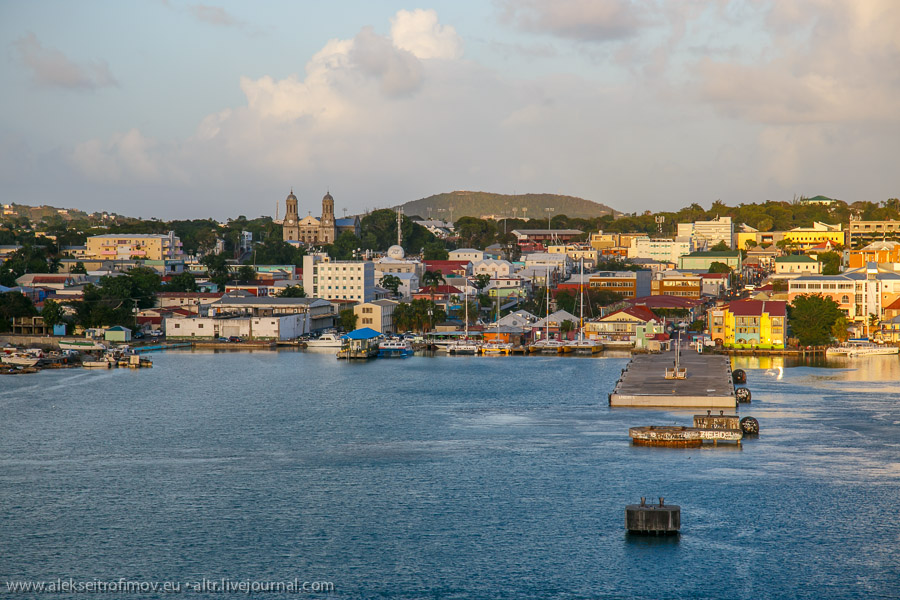 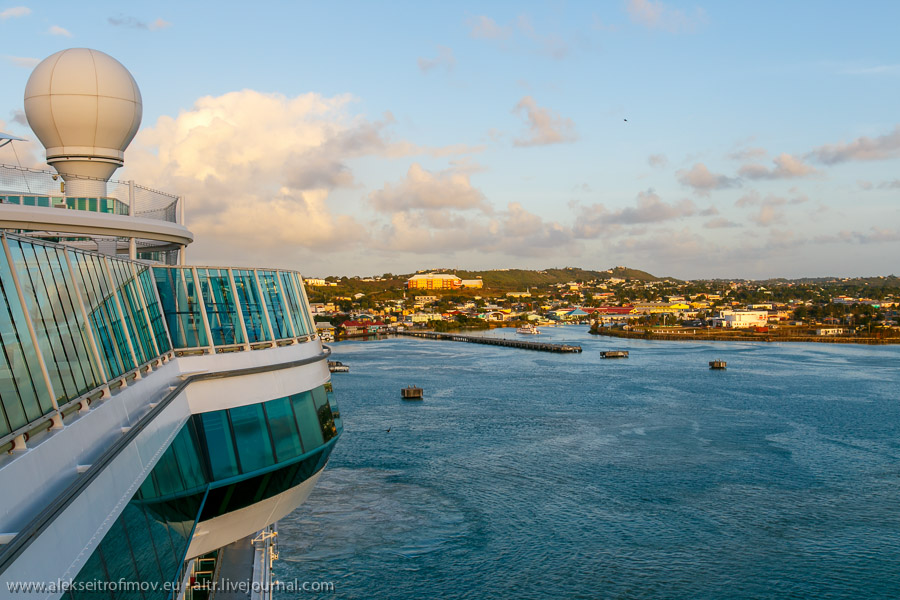 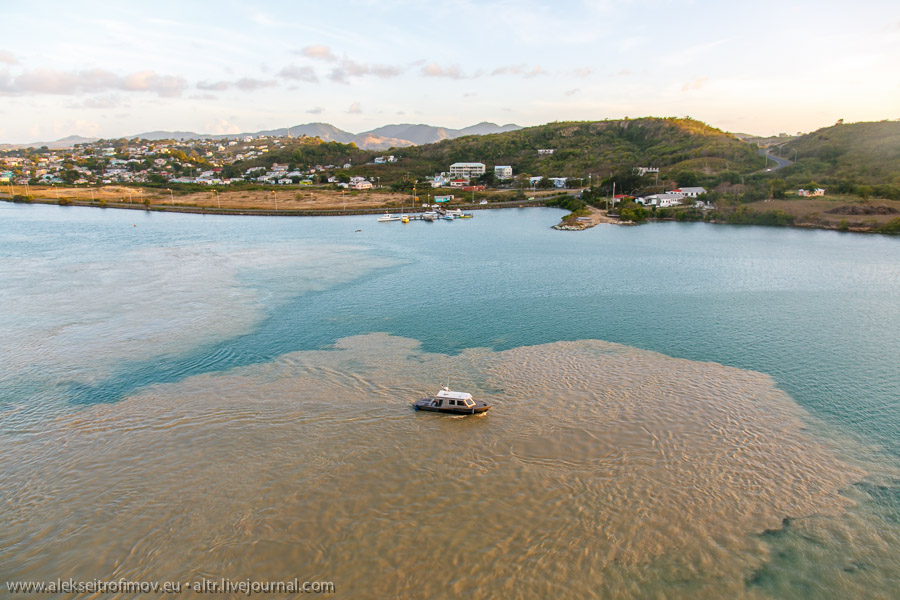 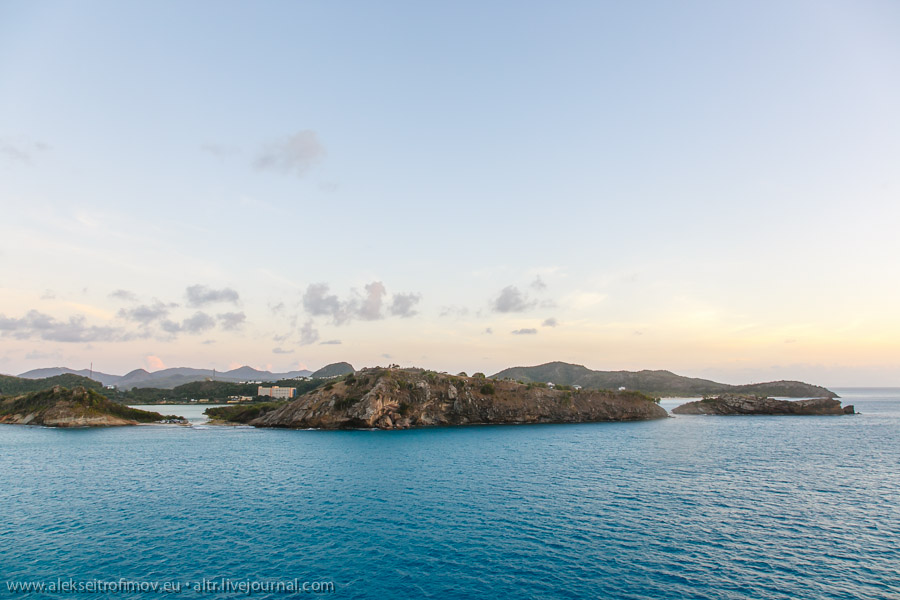 Blotches in the sky 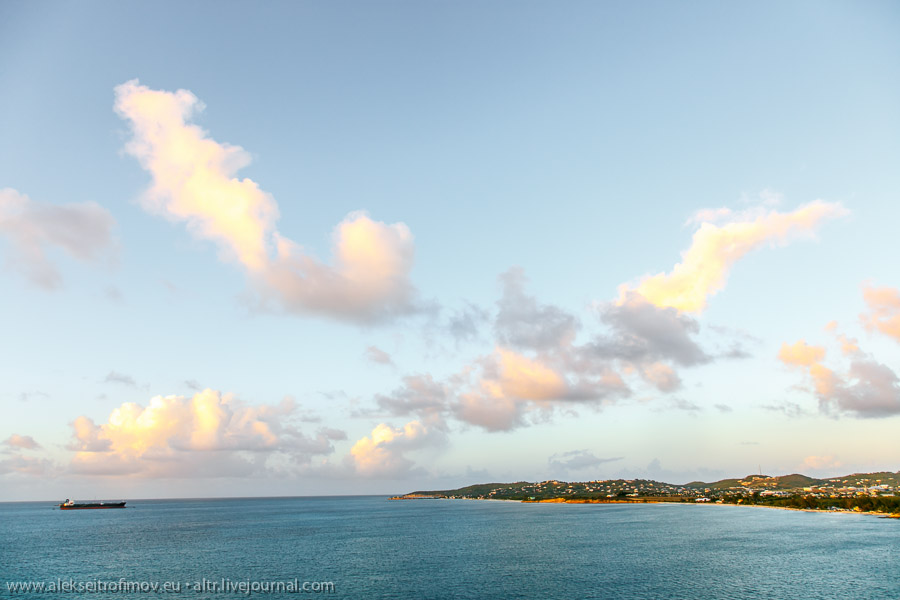 All the posts about the cruise in the Caribbean:
Puerto Rico: Strange Spanish-speaking United States
A Denmark in the Antilles: Charlotte-Amalie of the US Virgin Islands
Blotch of Antigua with its 365 beaches of eternal sun
Colourful decay of overseas France: Martinique
Saint Lucia, the most authentic of the Caribbean islands
The last island of the Antilles: Grenada