Perth is the most isolated large city in the world. The closest cities worth the name of are located in South Australia – these are Adelaide and Melbourne. In recent times we’ve heard of Perth due to the (first) Malaysian plane – the one that disappeared without a trace potentially somewhere in the Indian ocean 2000 km West of Perth. Not exactly next door, but it was from here that the submarines and planes were sent to hunt it down. As we know, without success. There is a ongoing and fairly recent boom of natural resource extraction in Western Australia. As a result Perth, the capital, has become the most expensive city in Australia – no mean feat I must tell you! I’d already heard of mind boggling prices in Perth from random acquaintances in Bali and elsewhere. Intrigued, I decided to include it in my trajectory at all costs (literally). And so from Alice Springs I boarded a plane to Perth. Qantas, naturally.

A terrible heat reigned over Perth during my stay – 40 degrees Celsius. Like a snail I crawled its streets with a single minded desire to get to the next air conditioned premises. Similarly to most Australian cities, Perth cannot boast an impressive list of tourist attractions. It is mostly manmade attractions in Perth – and very recent ones at that. And yet as most Australian cities Perth is a very pleasant place to spend some days. Notwithstanding the heat. I started my visit from the Botanical Gardens, particularly luscious in Perth. Situated on top of a hill, it offers a fantastic view of Perth. The city is built on the shores of the Swan River, which further connects it to the ocean. The peculiarity of Perth is that it’s built entirely on sands – and so all new construction is very difficult. 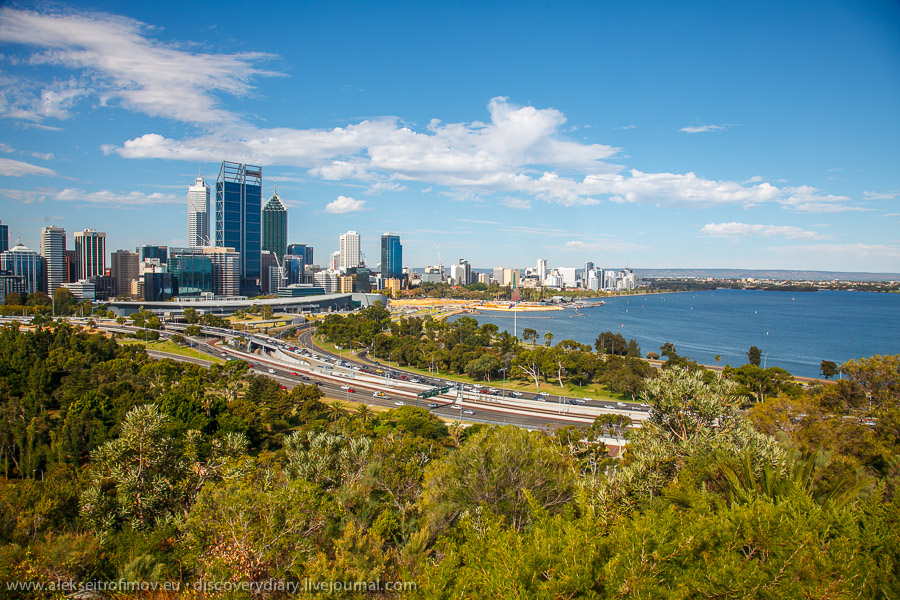 At the entrance of the Botanical Gardens is another memorial to the Australians who died in the two world wars. Hundreds of Perthians died in the battle of Gallipoli in WWI. Memorials of this sort can be found in every Australian city. 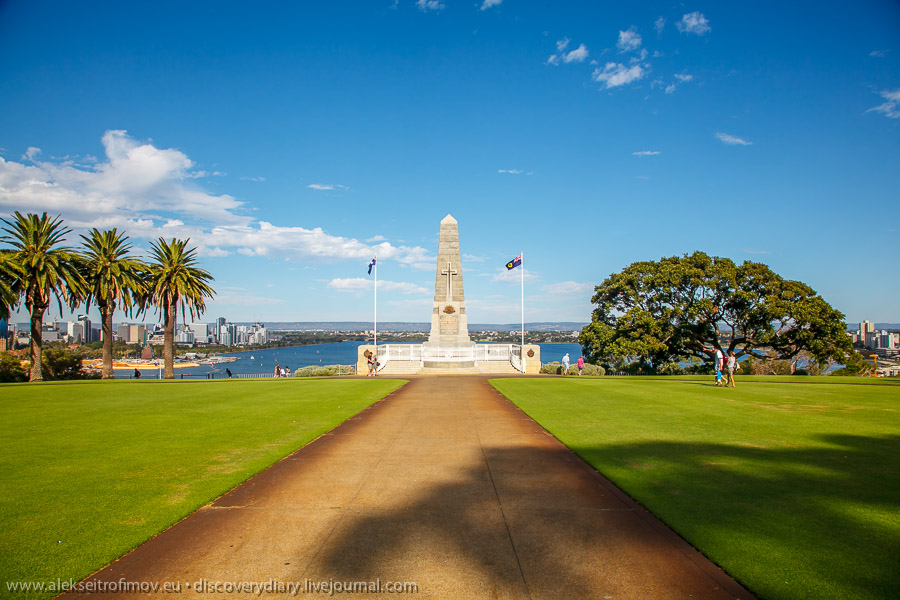 This bottle shaped tree is a veritable historical monument. It used to grow hundreds of kilometres to the North from here, on aboriginal land, and had a particular sacred meaning for the indigenous people. Later in order to preserve it it was decided to move it here. A complicated technical task. There is an exhibition of photos depicting how it was mounted on a van and slowly driven across the desert, escorted with several police cars. 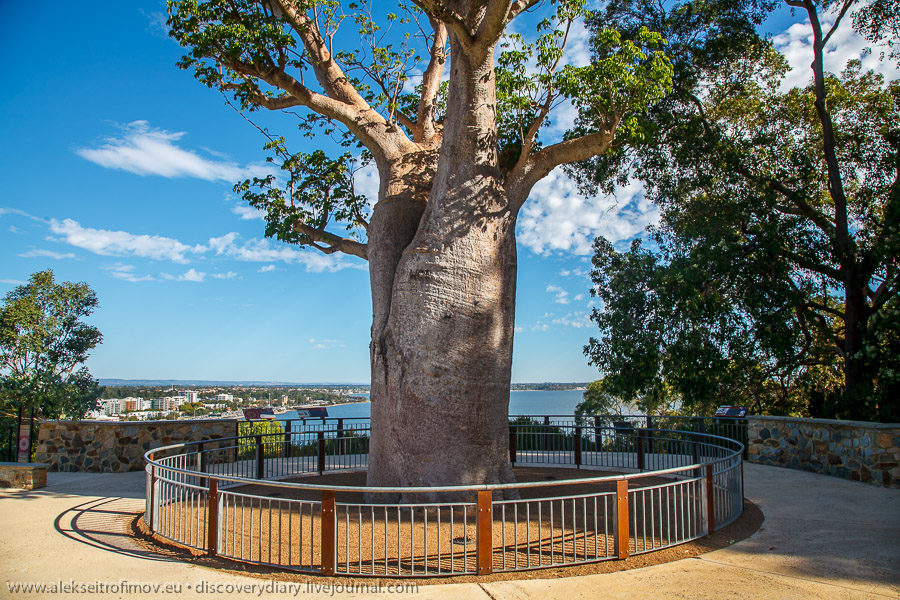 The so-called Coronation walk is the focus of the Gardens. The suspended pathway offers an insight into the typical vegetation of Western Ausralia. 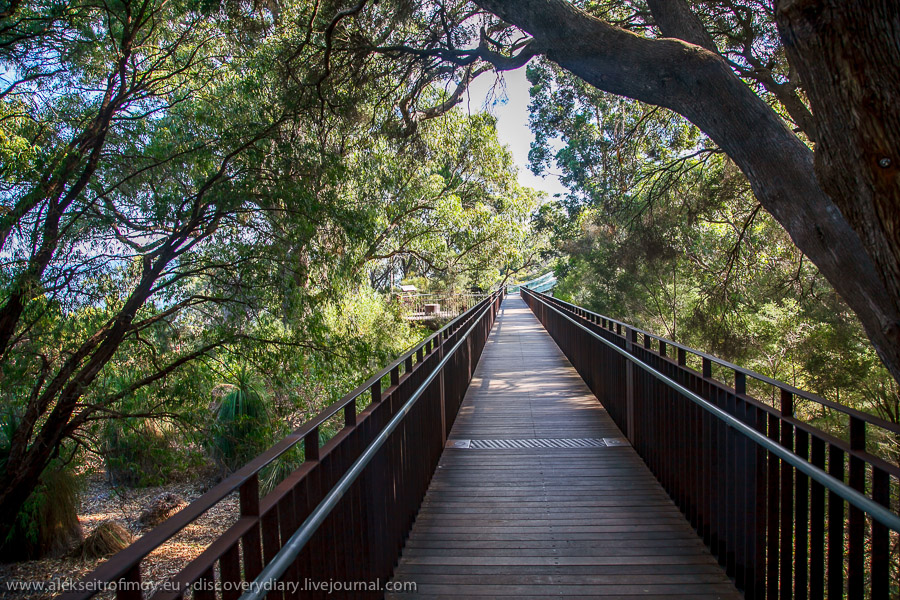 A glimpse of Perth from the Coronation Walk. 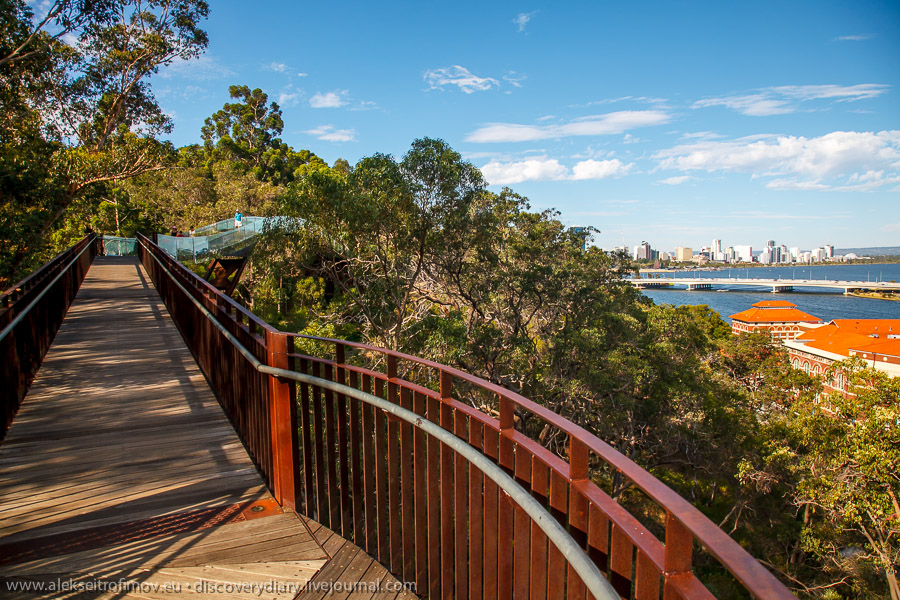 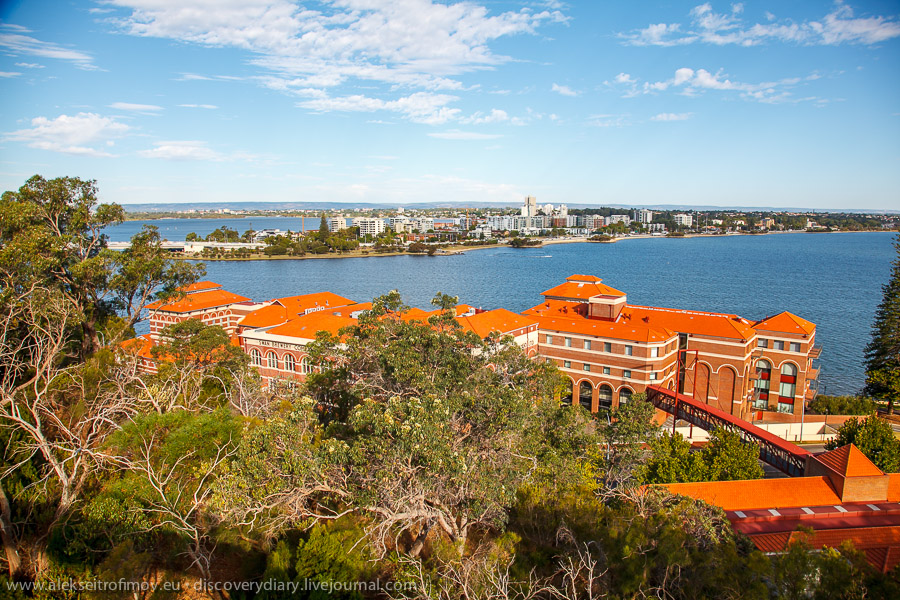 I was most inspired by the manmade objects in the Gardens, such as these benches in the Place of Reflexion. 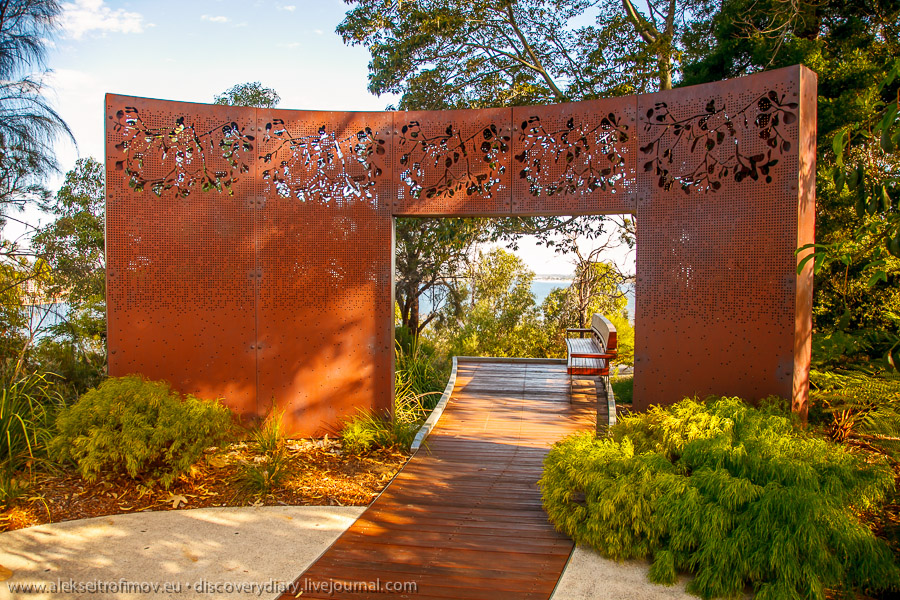 A walkway leads to them through the park and various New Age notions are written down. All of this is somehow unexpected and fascinating. 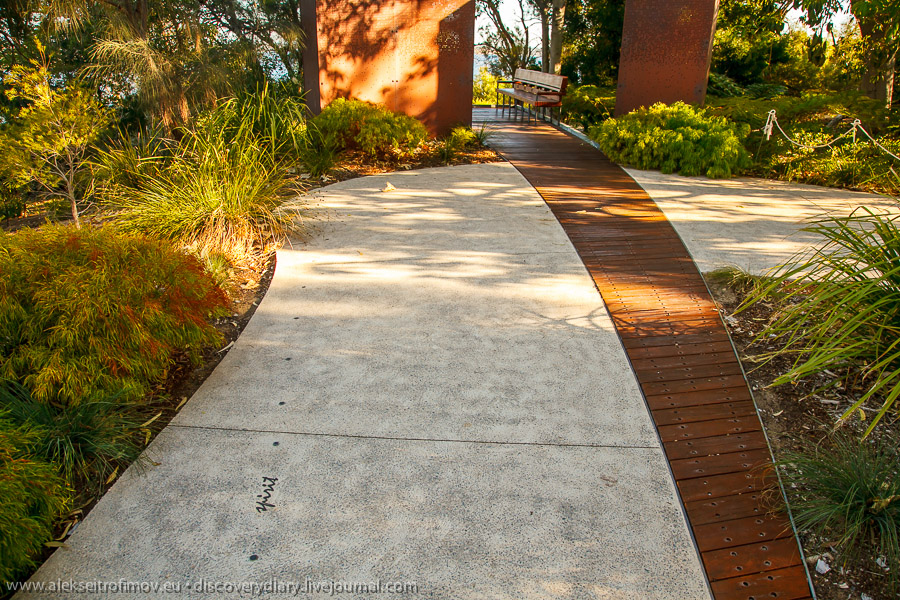 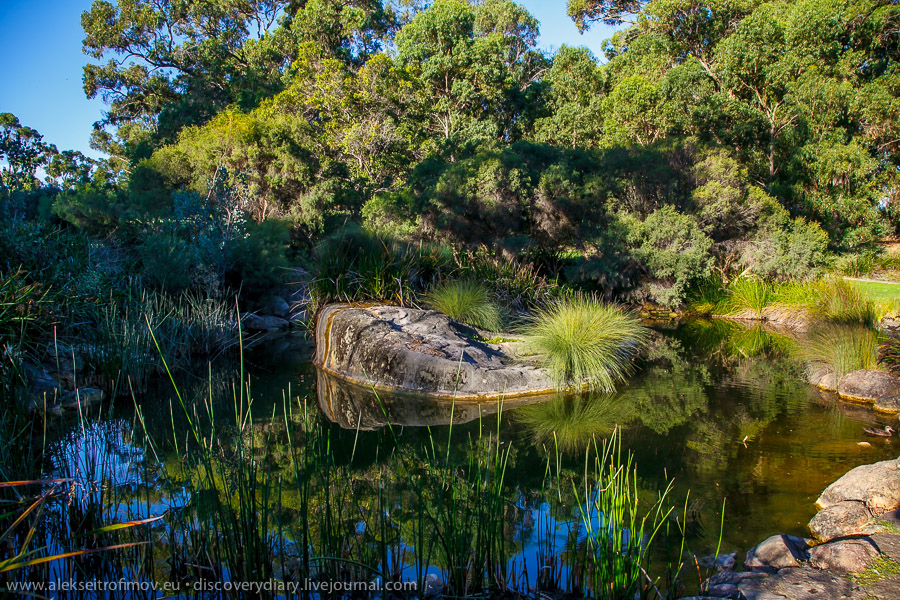 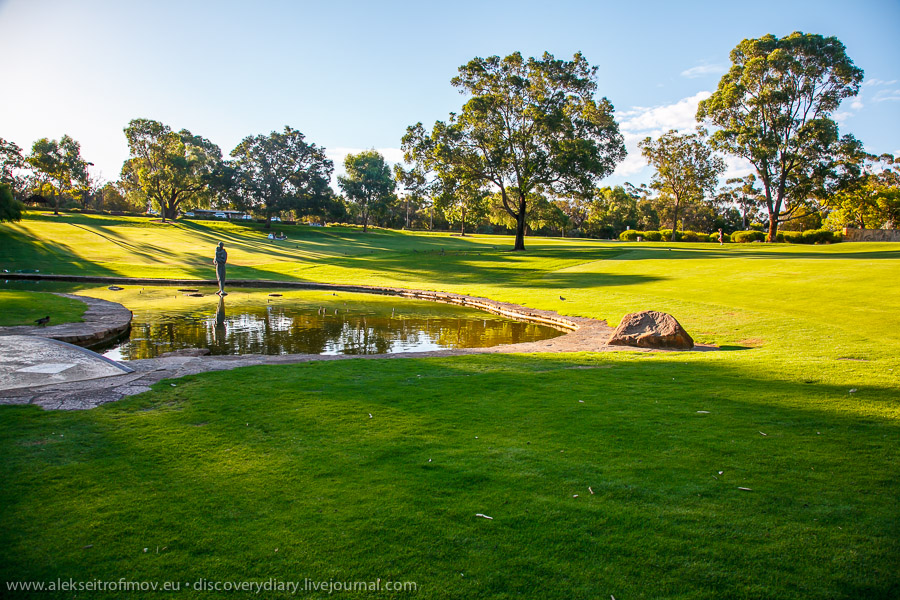 The local plants, looking very exotic to me. 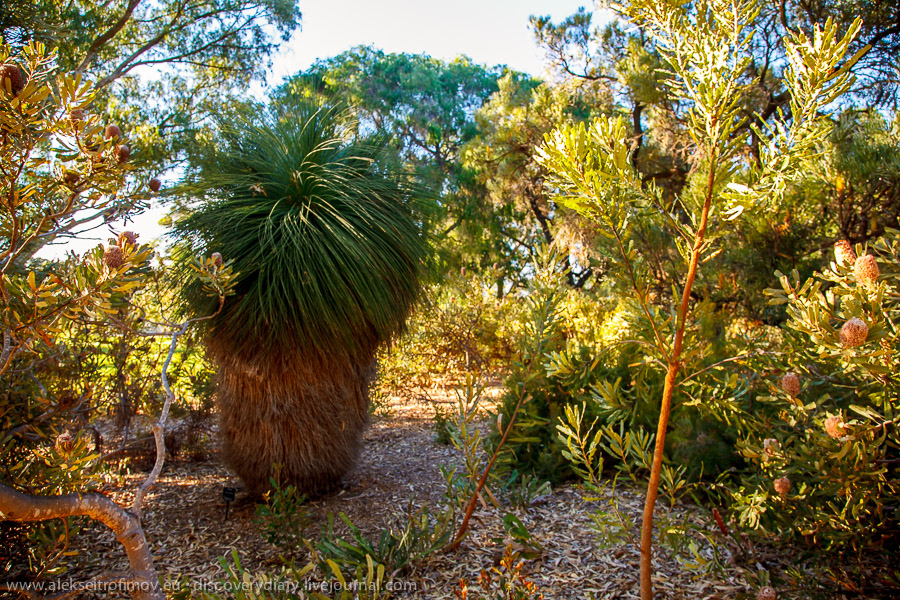 There is a special sector in the Garden meant to represent in a closed space  the flora of a particular region of Western Australia. I am no biologist, so the plants looked fairly similar to me – but I am sure it would be a feast for someone more knowledgeable. 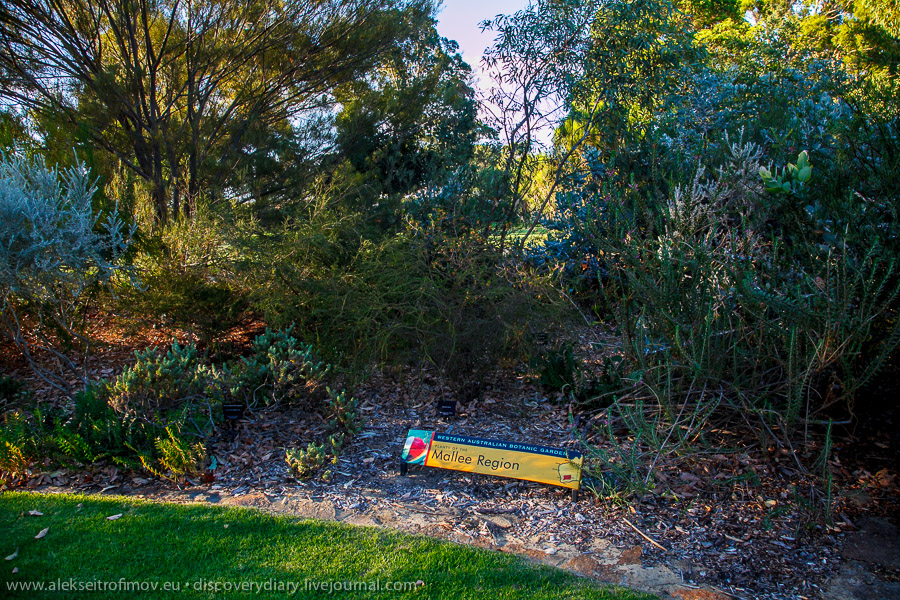 The most famous building in Perth is a glass Clock Tower. 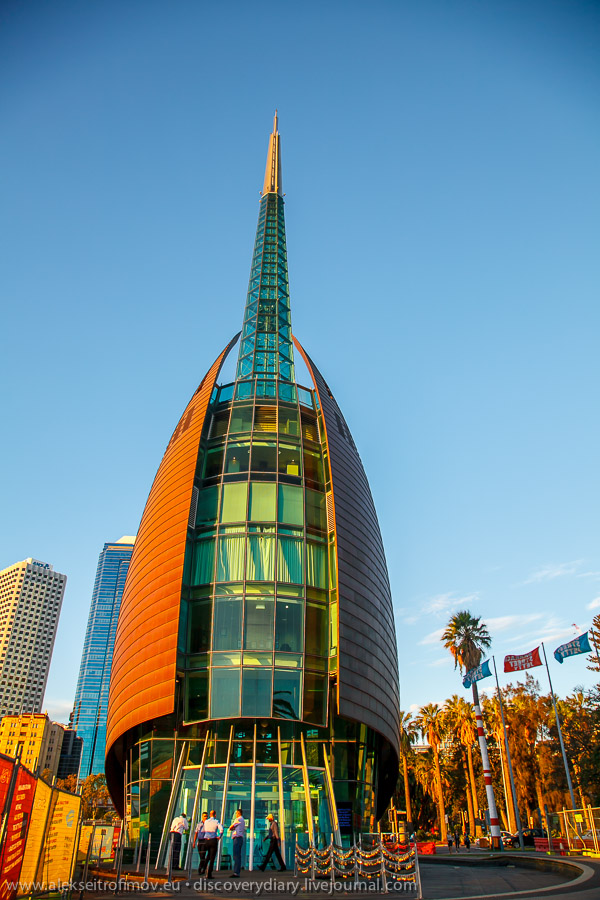 Suddenly some kangaroos in the city centre. 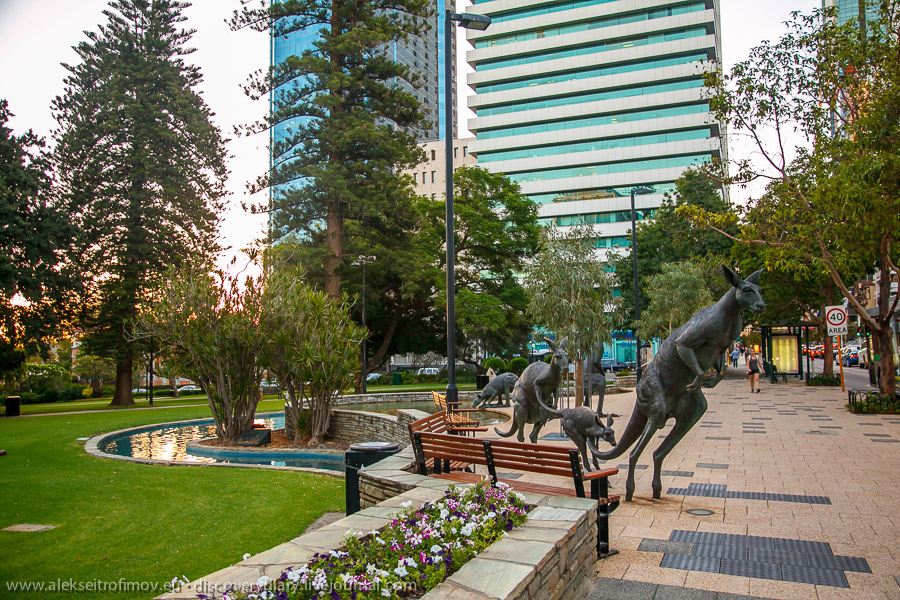 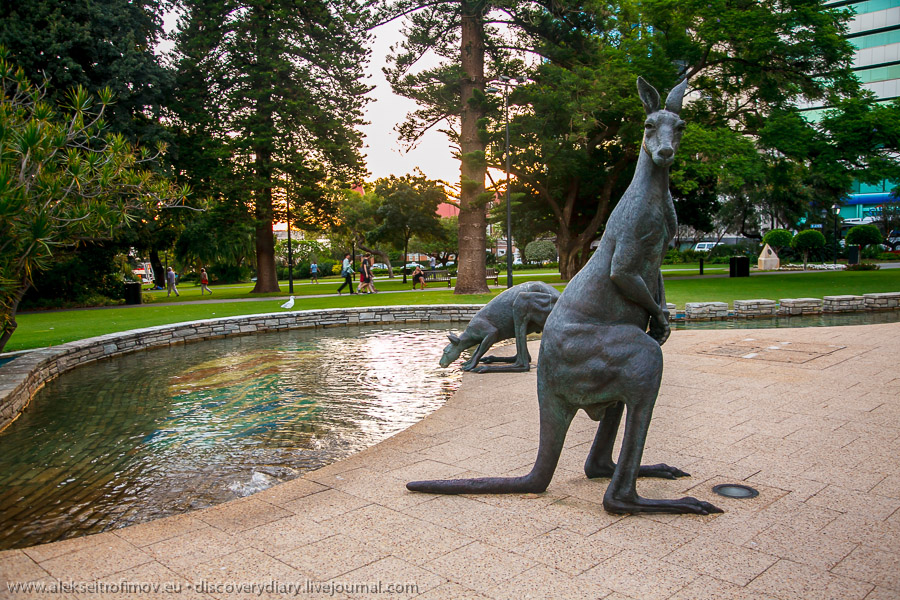 At the point where the Swan River flows into the ocean is located a suburb of Perth called Fremantle. Historically this was the Perth’s harbour where the incoming ships would moor. Nowadays Fremantle has evolved into a bohemian neighbourhood where the locals visit on weekends to relax. Fremantle is also the place where you take a ferry to Rottnest Island.

This island surrounded by a crown of white sand beaches is an ideal summer escape. Located about 20 km into the ocean, it is a very popular destination for day trips. A train from central Perth to Fremantle takes about 30 minutes. In Fremantle you disembark literally on the quay – I came about 20 minutes before a ferry departure and got my ticket right there in the queue. On the island I decided to rent a bike and so biked all around the island – it takes several hours to go around it. One of the first beach views: 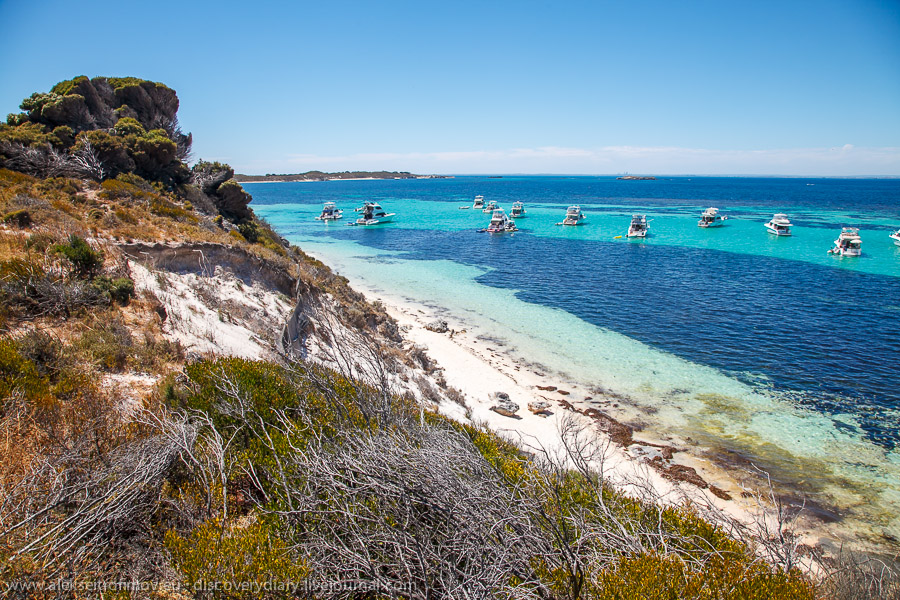 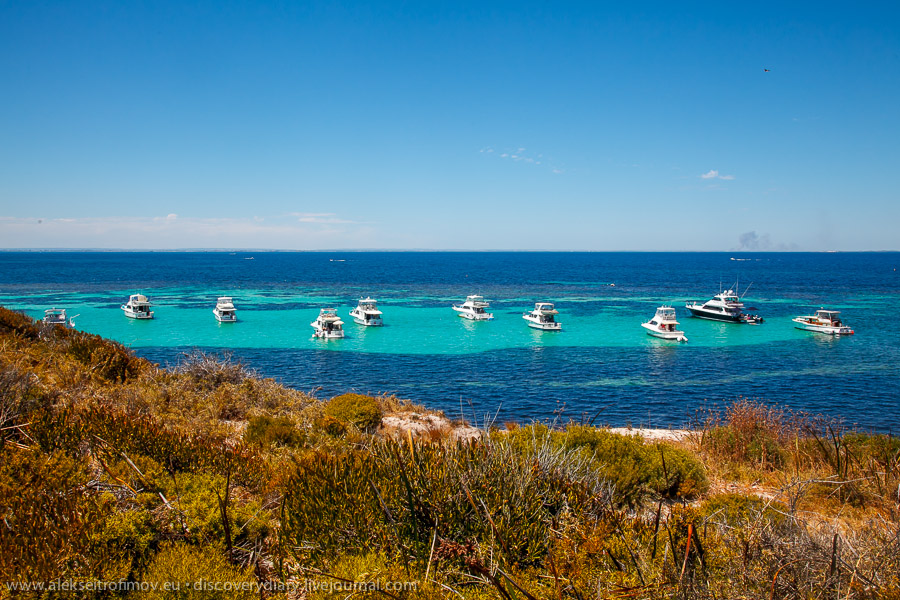 There are no sources of drinking water on the island, so you have to procure all your water in or around the main settlement – you cannot obtain any water later on the road. I replenished my water from a strange fountain-like source inside a courtyard – I found using the markings on the map.

There is a program taking place aiming to restore the indigenous flora of the island – these green enclosures are meant to protect the new growth. 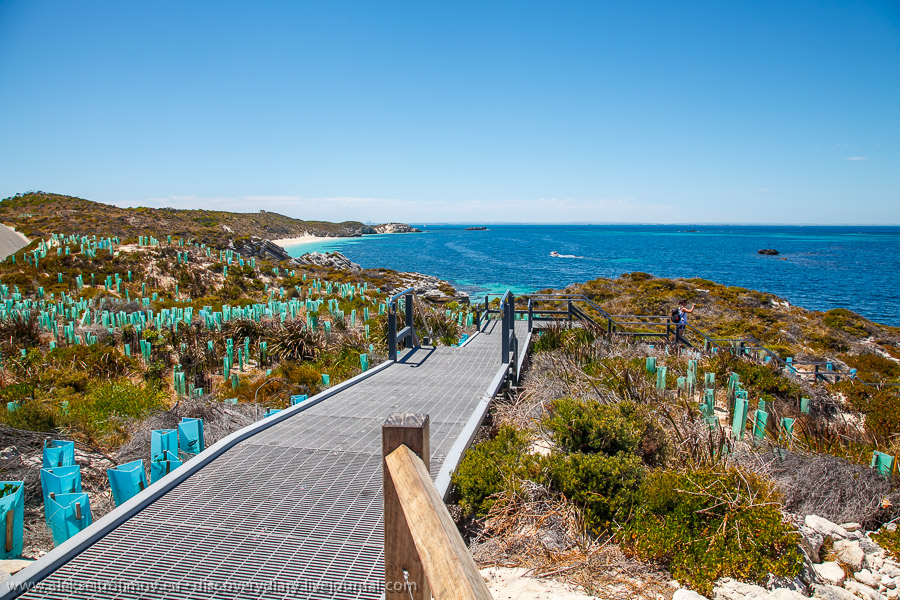 The map of the island looks like an endless row of beaches and diving and snorkelling spots. 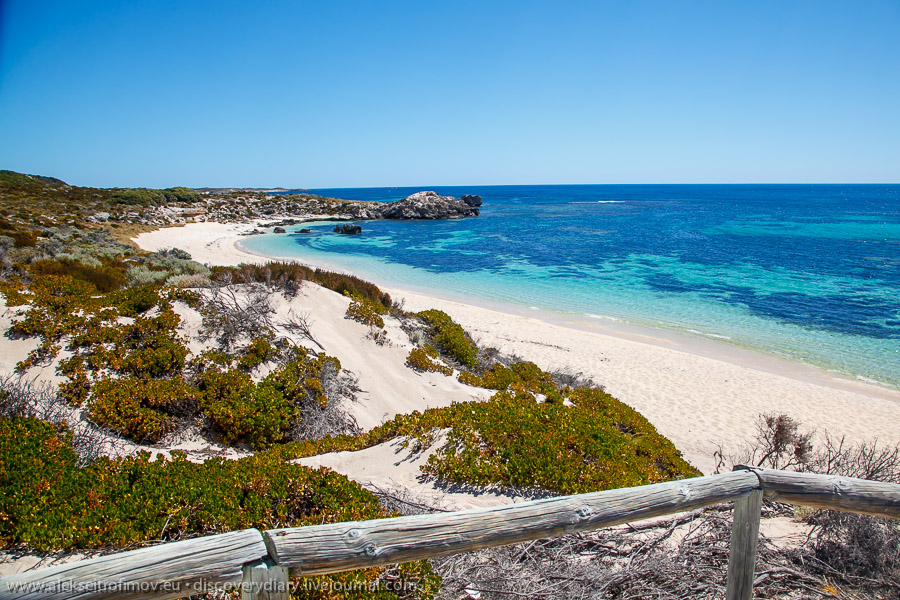 I decided to take a lazy swim in the Indian ocean too. Very salty I must say. It was simply wonderful. 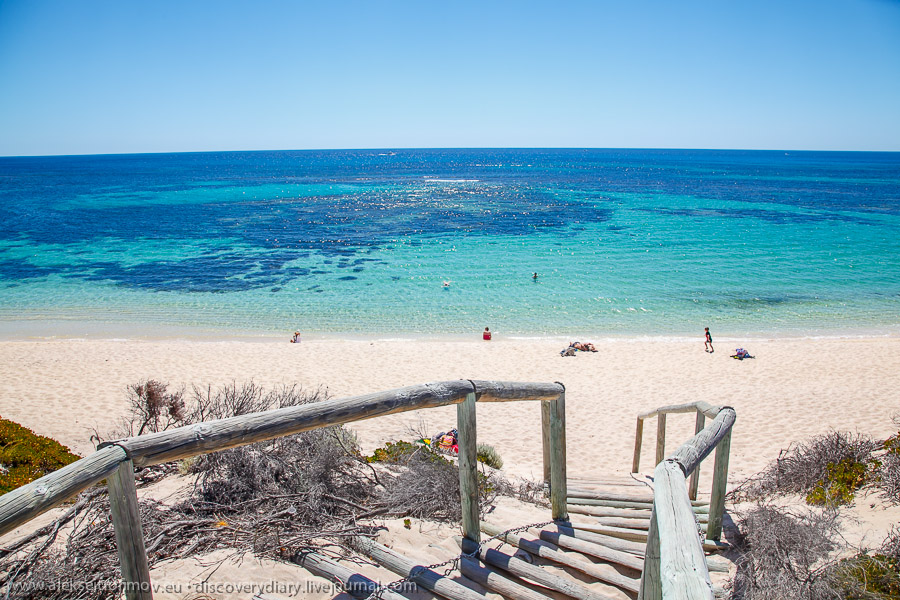 One of the internal roads. 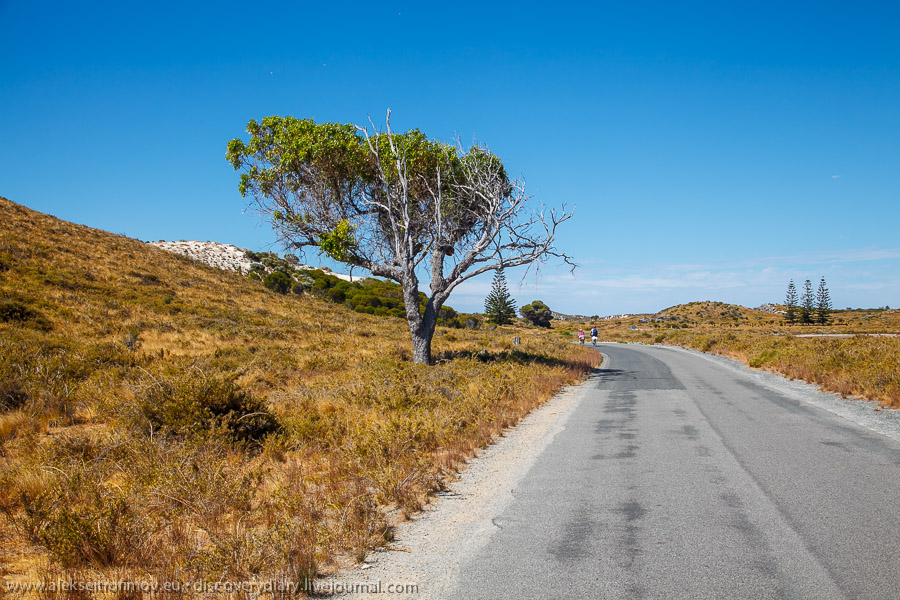 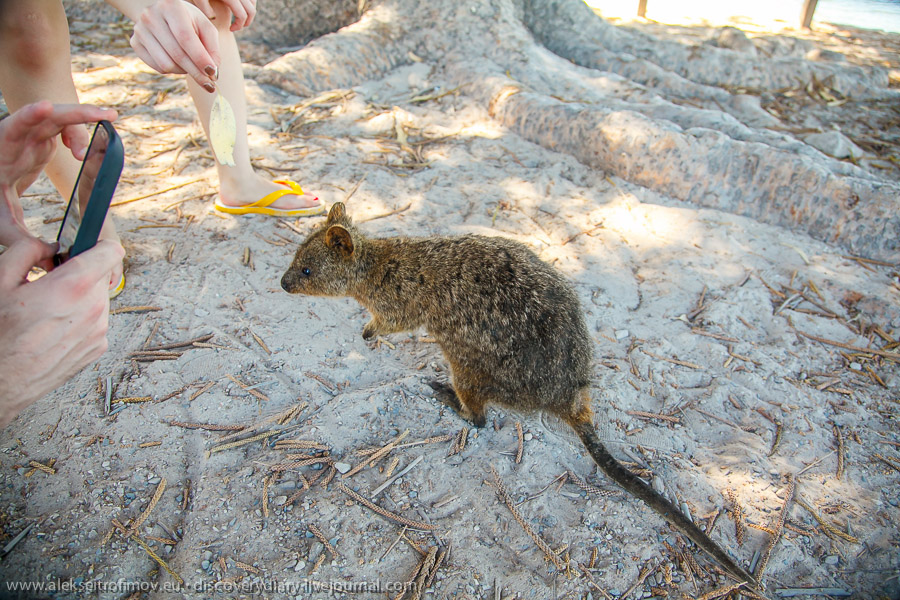 One of them agreed to be friends with me. 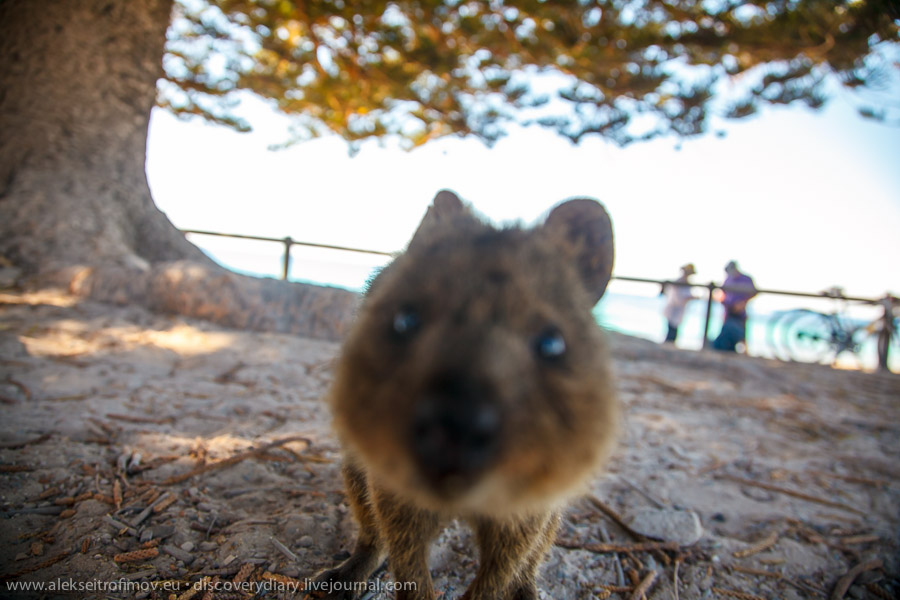 One more place for reflection. Rottnest Island today is an idyllic spot for graduation parties and city dwellers rest. However in 19th and the beginning of 20th century Rottnest was a prison, indeed a special prison for the aborigines who dared resist the colonial powers. The prison building was right here where this brightly painted building now stands. At some point the prison population reached 600 prisoners sent here from all over Western Australia. For someone who grew in an isolated community somewhere deep in the country to be sent to Rottnest where they knew no one and where they could not even speak to anyone in their own language was equal to death. Yet another shameful page in the history of interactions between the colonisers and the indigenous people in Australia. 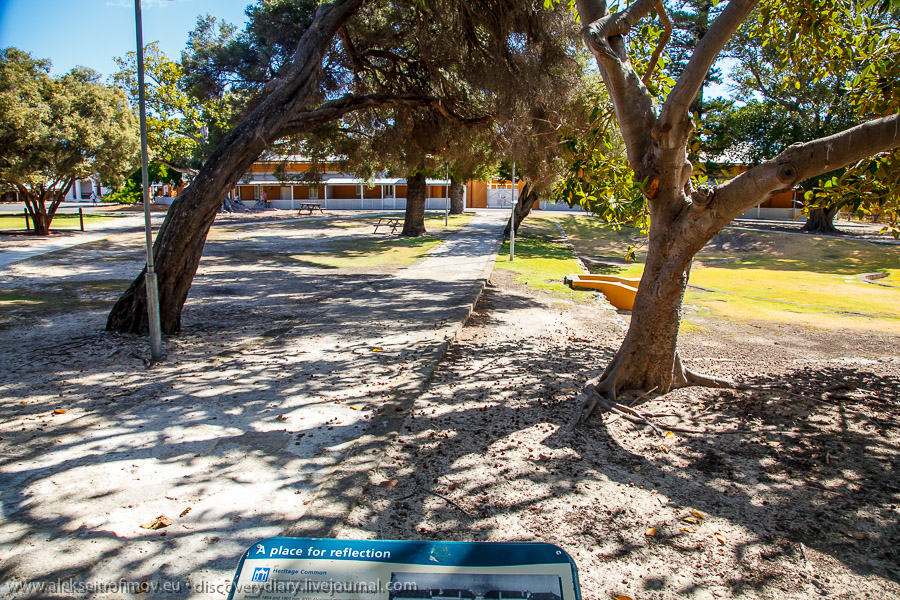 After the return from Rottnest I walked around Fremantle in the late afternoon as the sun was slowly setting. 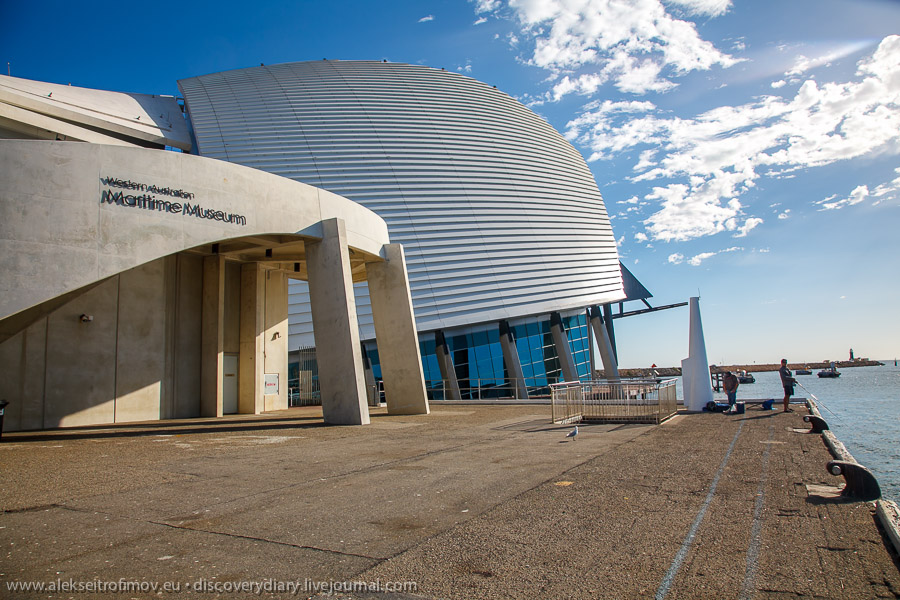 A classic dinner in Fremantle: local oysters with white wine. 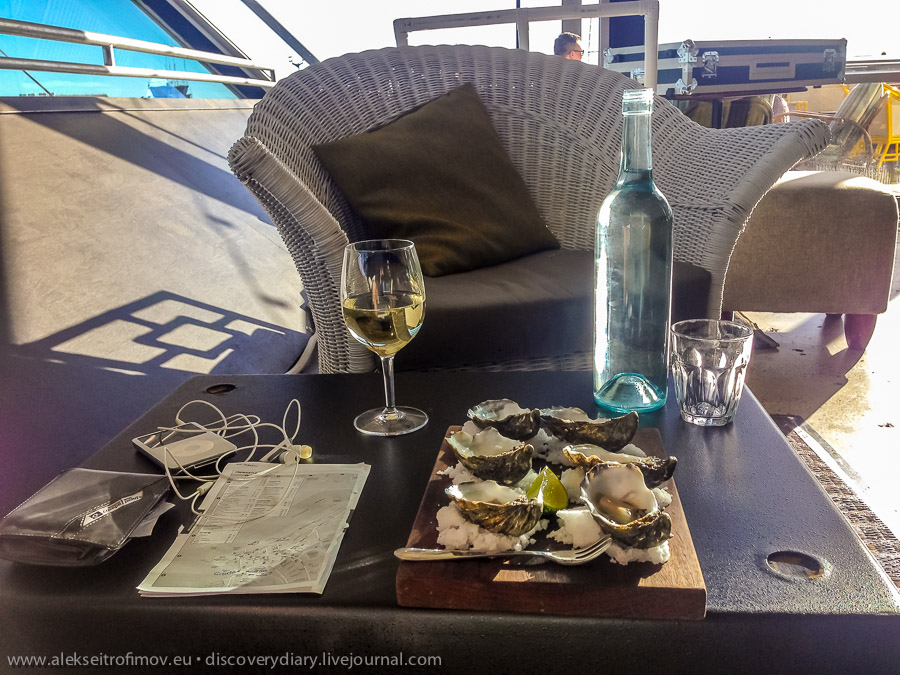 As well as fish’n’chips (in another place). The sea gulls like robbers made repeated attempts at stealing my fries. 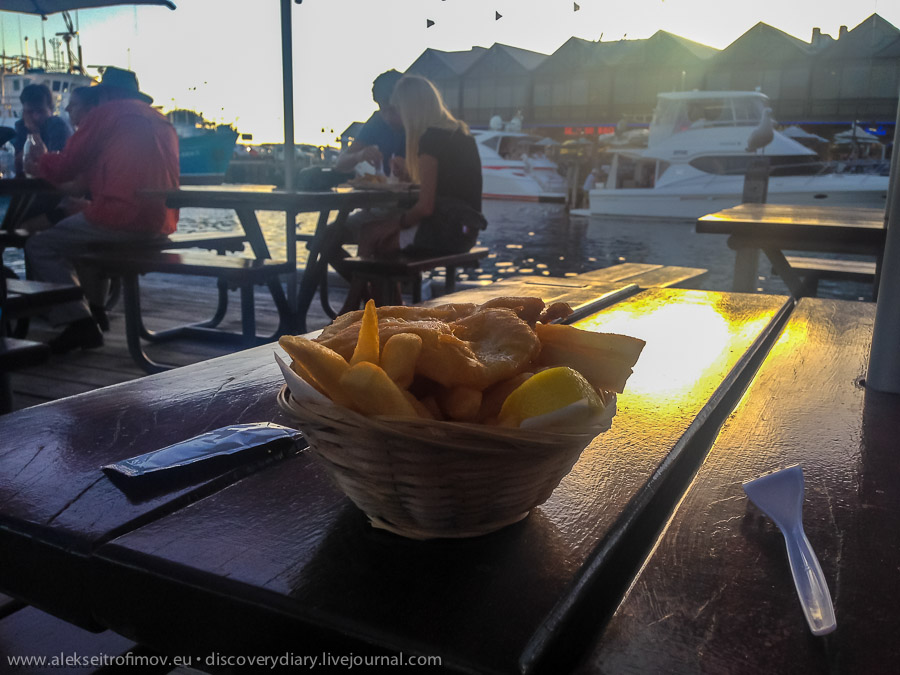 I visited several museums in Perth, including a city museum and a contemporary art gallery. To their credit, the topic of the aborigines and their intreactions with the mainstream society is not entirely forgotten there. For example I saw this painting by an indigenous artist. The joyous and lively white people enjoying the beaches of Perth which have been fertilised by the bones and thoughts and history of the aborigines – that was my interpretation. 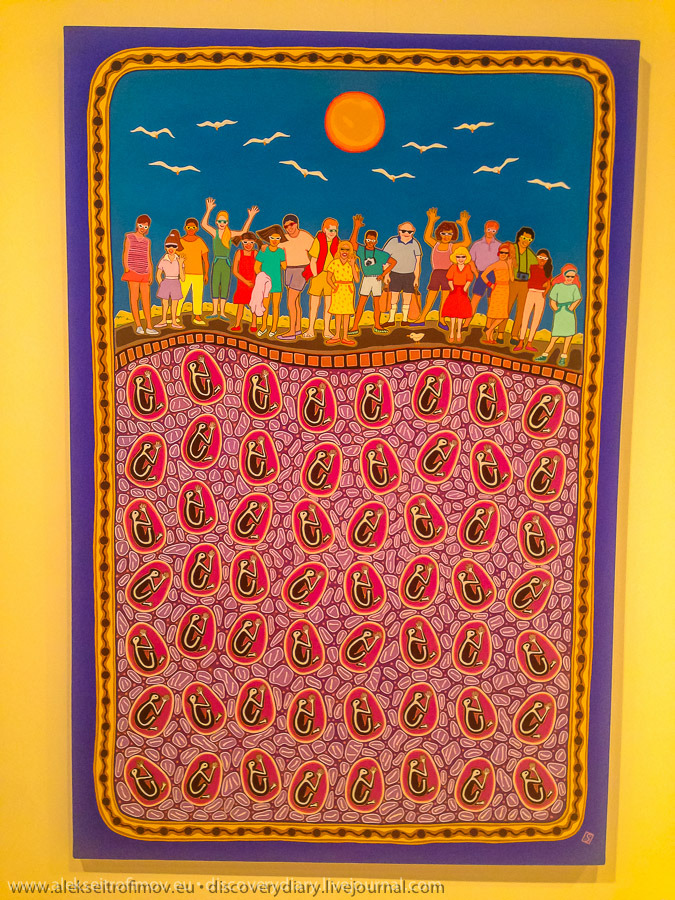 And another photo – this one from the city museum’s exhibition. I was overtaken with sheer disgust as I was looking at the posing white “hunters” with the chained aborigines in the background. And yet it was self-evident in the day. The whole economy of Western Australia was in fact built on the aboriginal slave labour. The white people first used their detailed knowledge of the land to identify the water sources, and then took control of the water by force, thus effectively depriving the aborigines from the means for existence. The native lands were turned into deserts or enormous farms breeding stock for export. The farms were manned by the same aborigines, often without pay. There are lots of court cases currently where the aboriginal claimants try to obtain the money they’ve earned decades ago. According to the system at the time, the money was transferred to their accounts, but they had no access to it – rather it was the government and various trustee offices that managed the accounts, often billing the aborigines for bogus services without their knowledge.

Another incredibly cruel program was the removal of small children from aboriginal families. The children were placed in specially founded orphanages. There they were forbidden to talk about their parents and even to speak their native languages. All education and socialisation had to take place in English. As a result, many families were broken apart forever, particularly if the children were removed at a very young age. The colonial powers at the time believed that in this way the children are “saved” into civilisation. It was also expected that they would marry white people and in this manner the black blood would be gradually “dissolved”. Can you be more racist than that?

The left-wing government of Kevin Rudd that came into power in 2007 symbolically asked for forgiveness for the injustices committed against the indigenous people by the white colonisers. However in 2013 the right again came to power and so the pendulum swung the other way yet again. The state funding for judicial support for the aborigines have been cut and instead given to the white landowners and large corporations. 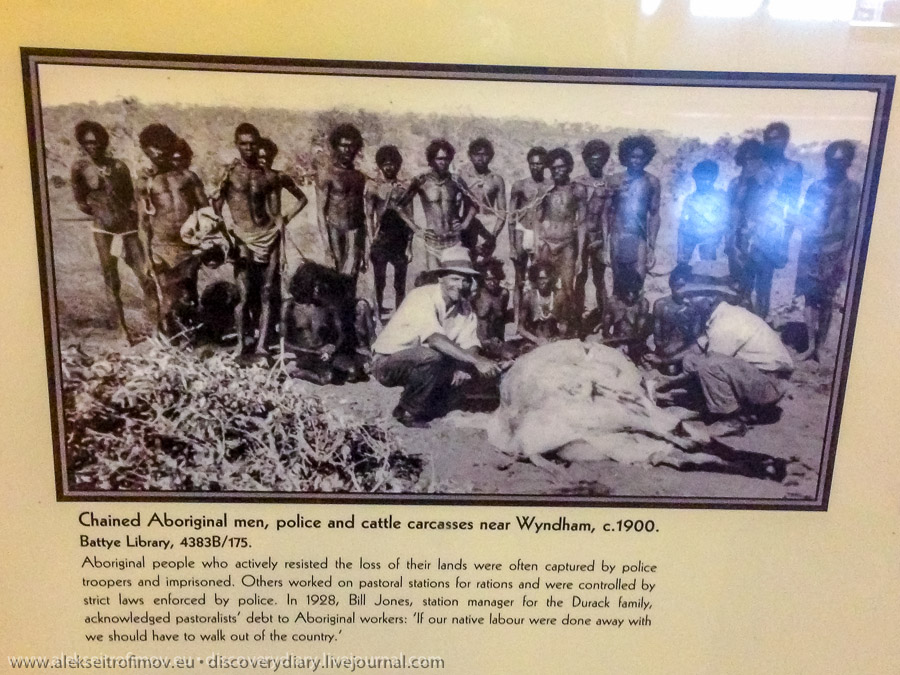 The Perth city museum also has a large section on natural history. I especially liked this one exhibit. It represents the line of human evolution – the skulls of our various ancestors are shown in chronological order together with the places where they were found. Finally the line ends with the mirror, on which it is written: “Homo sapiens. Perth. 2014”. 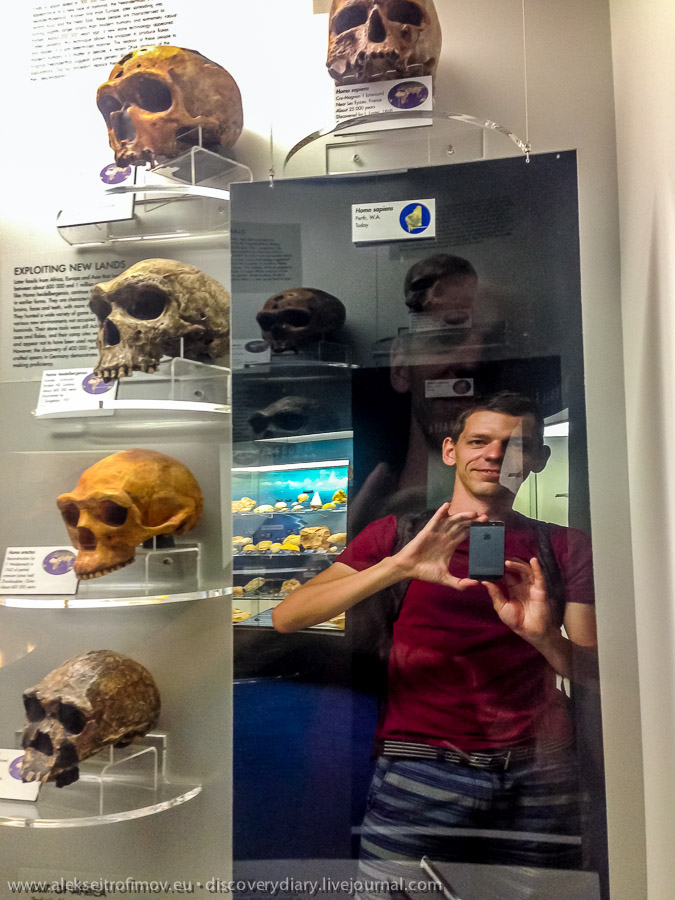 One thought on “Perth, the most isolated megapolis in the world”