Jerez is most famous thanks to sherry, the famous fortified wine that originates here. The very word sherry is a linguistic derivative of Jerez. The wine is rather strong, up to 20 degrees. I was surprised to find the amazing variety of various sherries to be found in any Jerez restaurant. Wikipedia has a wealth of info on all of them, I will say that I liked the sweet varieties the most – such as Pedro Ximenez.

Jerez’s attractions do not stop at sherry. Jerez is famed in Spain as a city of wine, flamenco and horses. Flamenco traditions are also still alive here, and simply walking around town in the evening I could here the sad songs accompanied by the spectators’ clapping in random courtyards. And finally for the horses – the Royal Andalusian School of Equestrian Art is found here, the main such school of the Spanish army. It can even be visited. The main festival in Jerez is Fiesta del Caballo, and for this one week the town is full of equestrian enthusiasts. I decided to discover flamenco in its cradle – Sevilla – so mostly it was sherry tasting for me, as well as simply walking around the city.

The main architectural and historical sight of Jerez is no doubt Alcázar. It is a Muslim fortress originally built in 11-12 centuries. Jerez is called Jerez de la Frontera for a reason – for many centuries it belonged to Muslims. Only in 1255 the Castilians took it and the frontier of the Reconquista lied here for a long time. The fortress from outside: 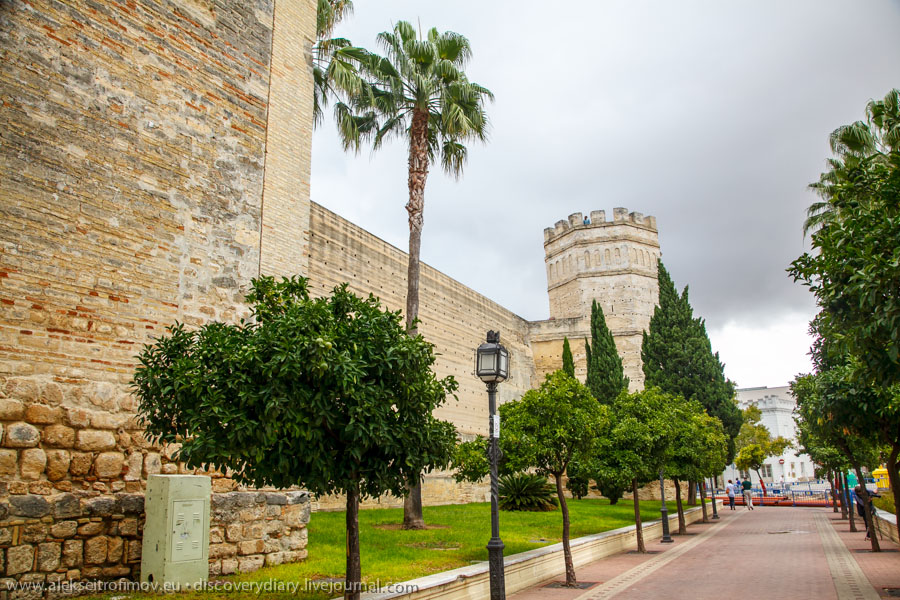 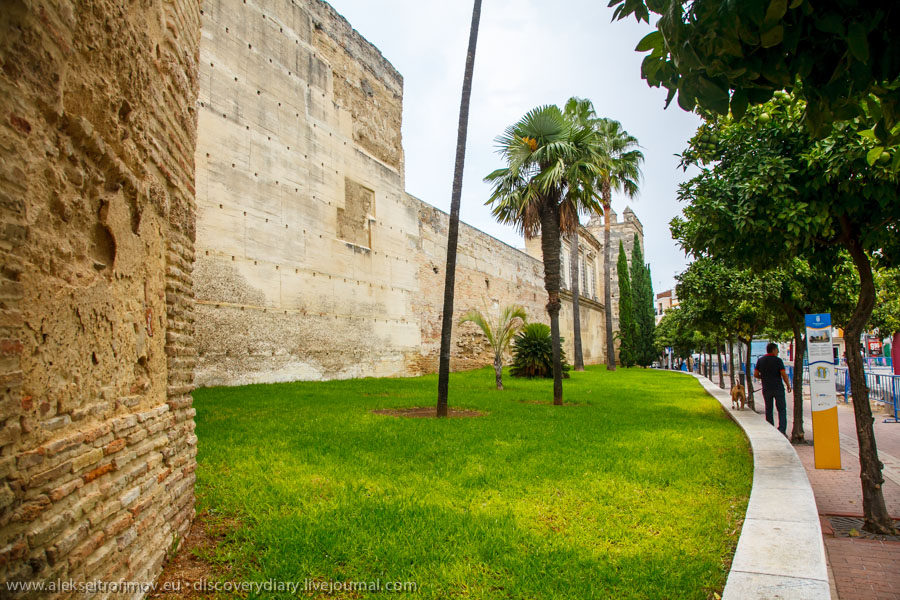 The main gates of Alcázar from it’s main courtyard: 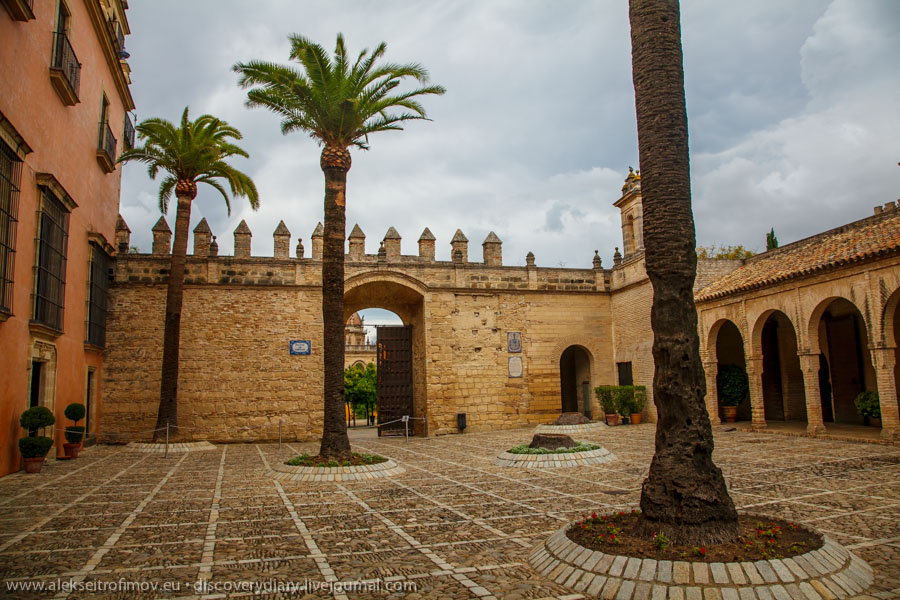 From the same point, the centre of the fortress: 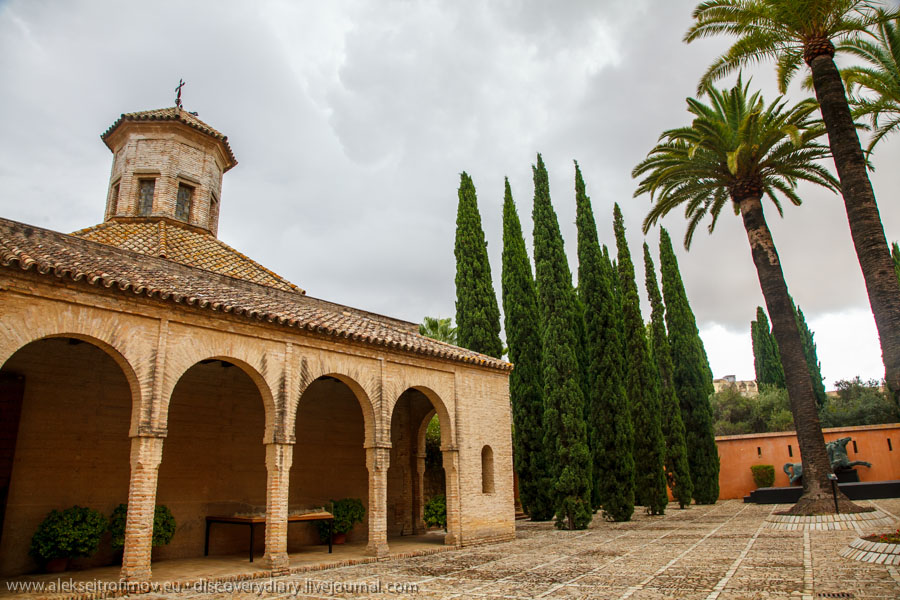 As you pass the arches on the previous photo, you enter this chapel. You can easily see that it’s a former mosque. The very first Catholic king who conquered Jerez converted the mosque into a church. 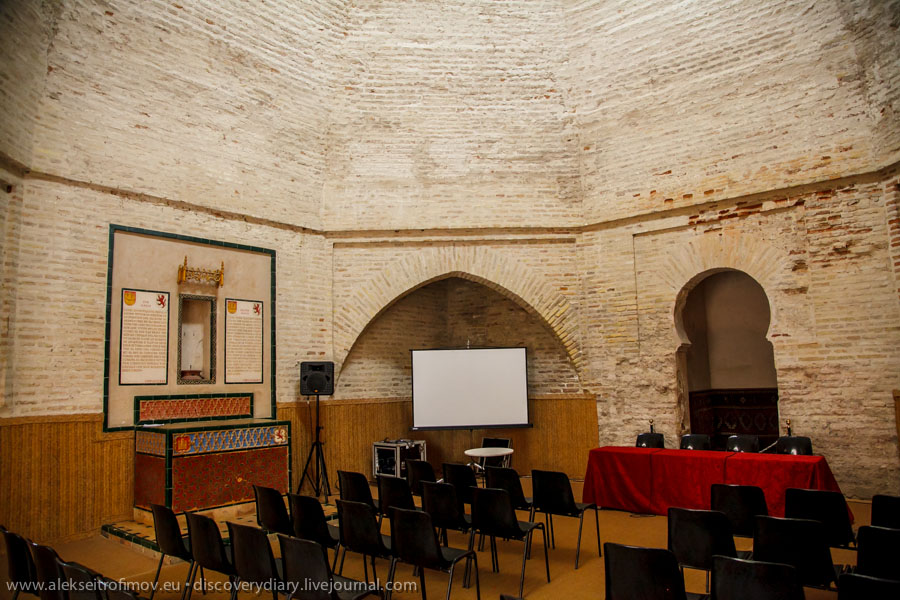 That’s him – Alfonso X the Wise, the conqueror of Jerez. 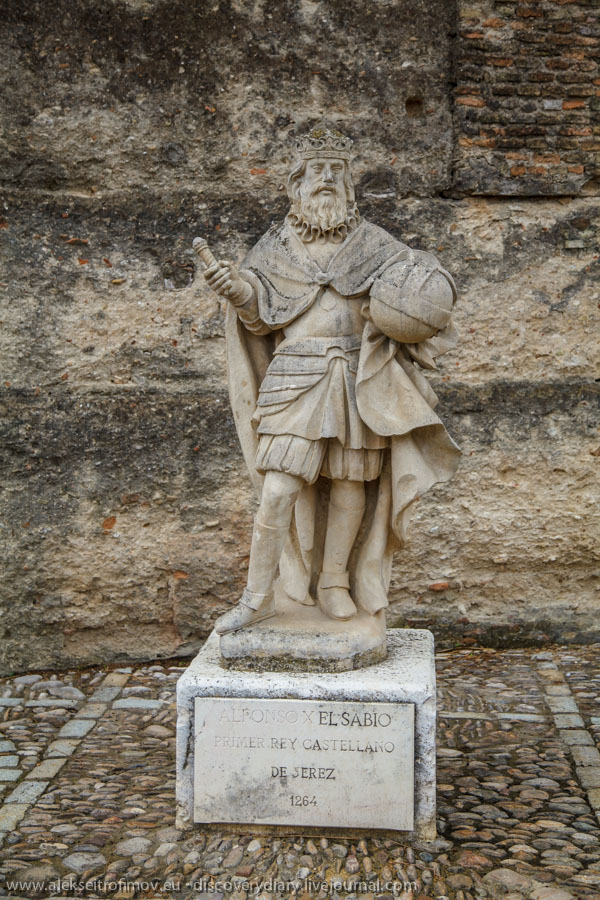 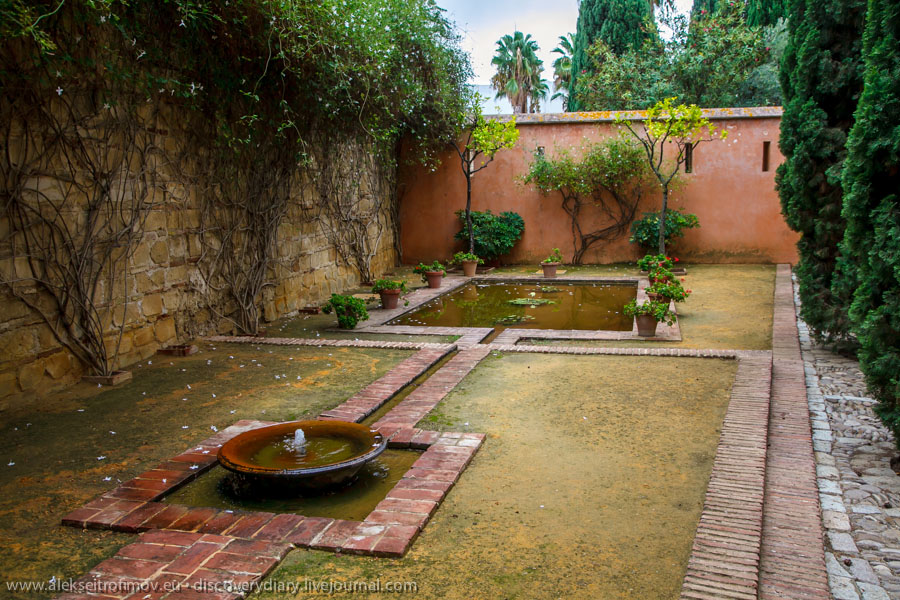 The view of the main courtyard which you can enjoy from the surrounding bastions. The pink building in the background is the Villavicencio palace, built in 18th century over the ruins of the old Muslim palace. The palace belong to the most distinguished aristocratic family in Jerez. 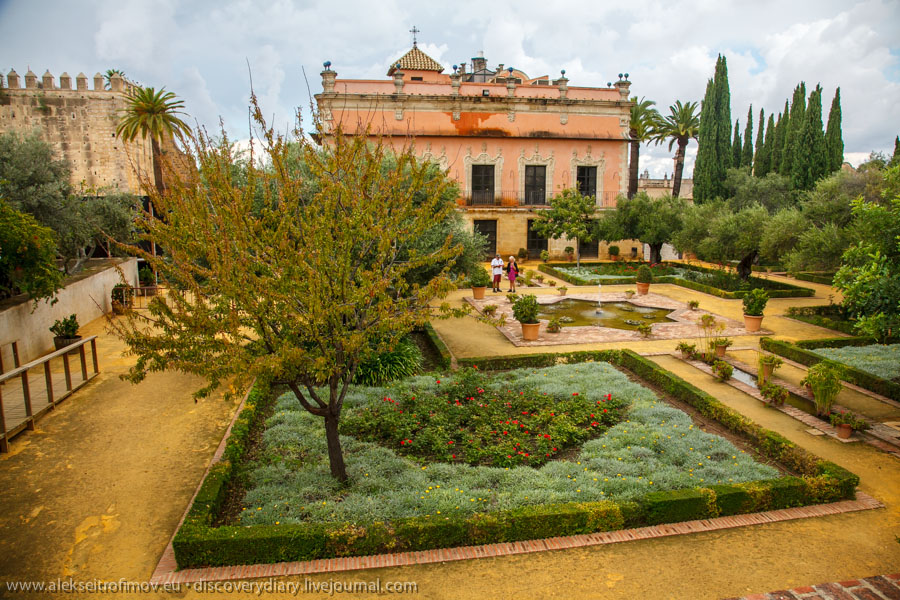 This beautiful fountain is at the centre of the garden. 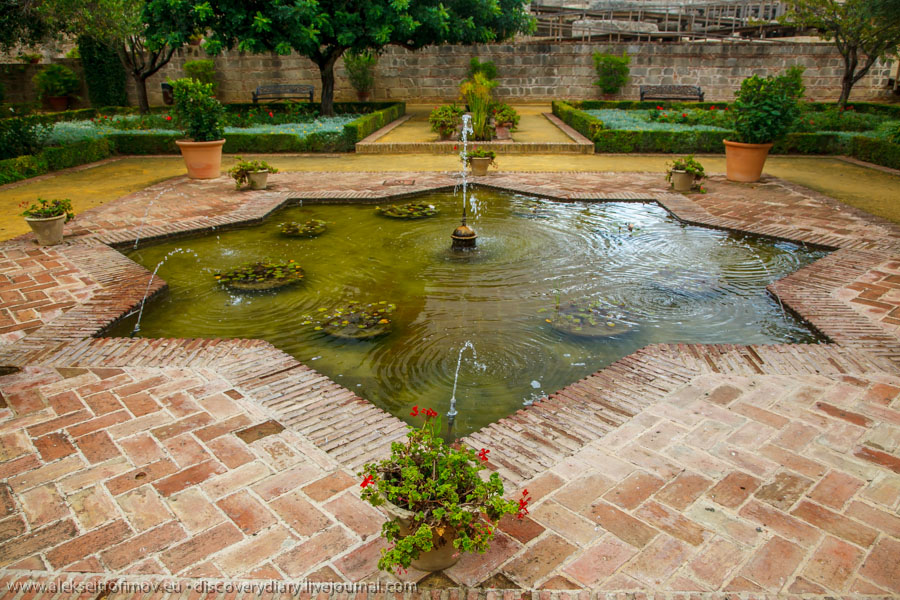 I climbed the corner tower: 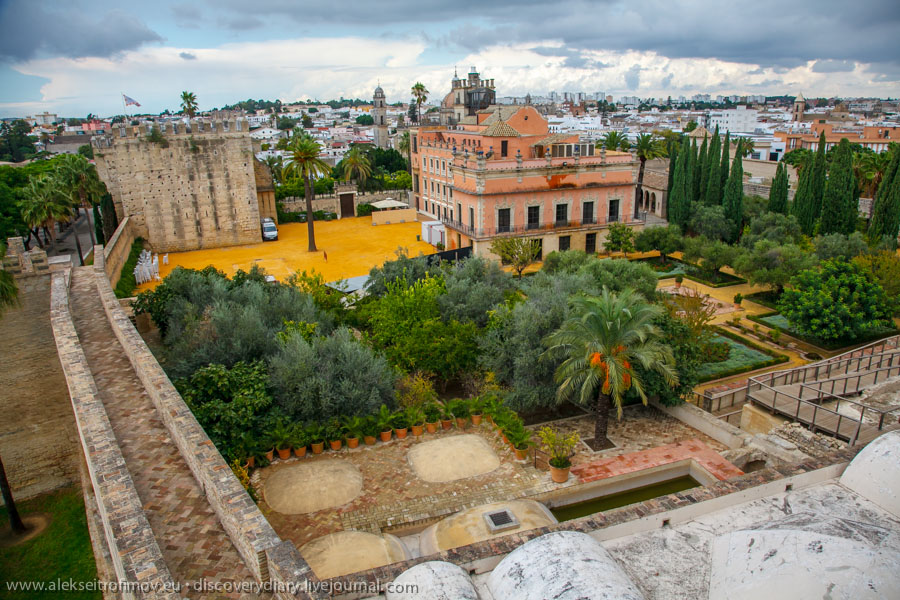 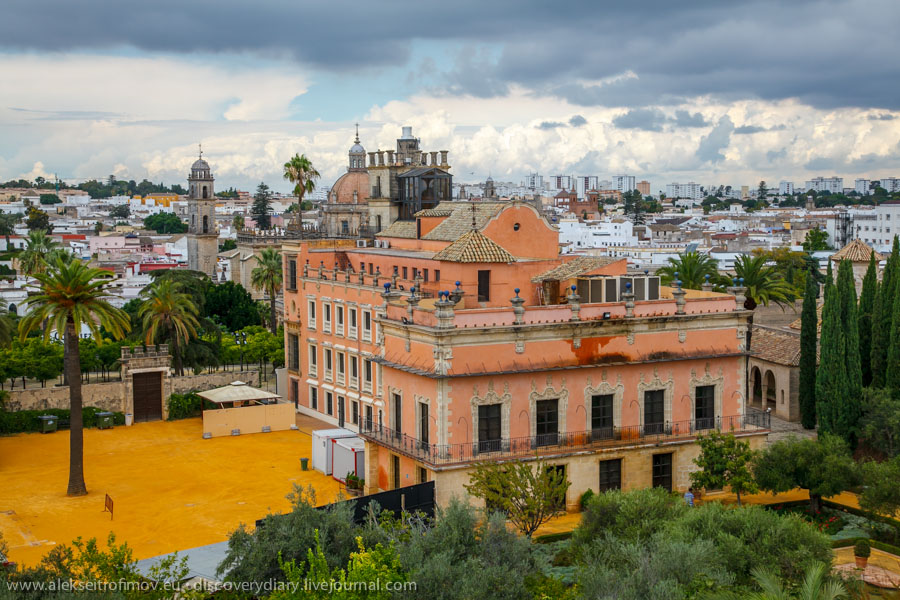 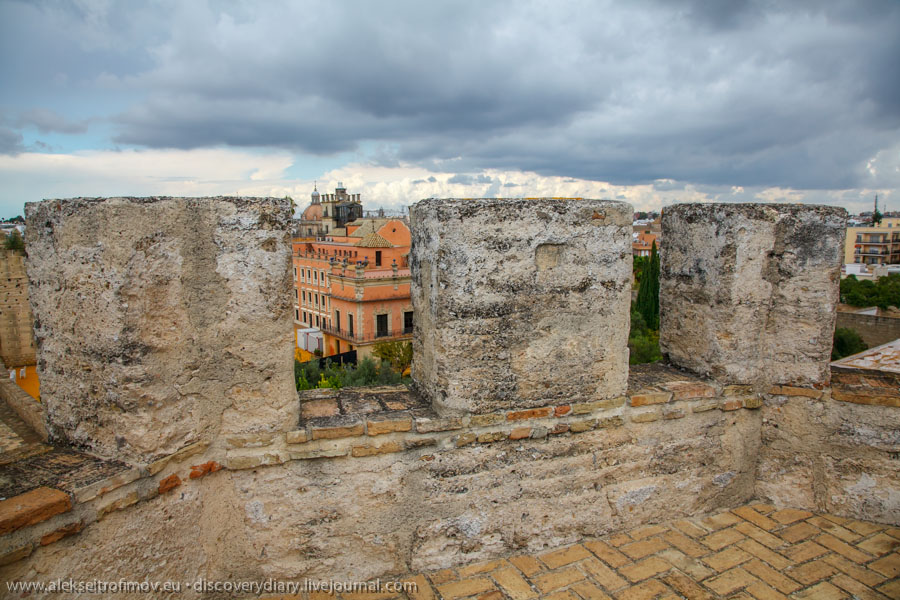 From the corner tower you can look at the hills surrounding Jerez from every side. You can easily imagine there how in the Middle Ages the tower keepers would look into the distance trying to make out the advancing enemy troops. 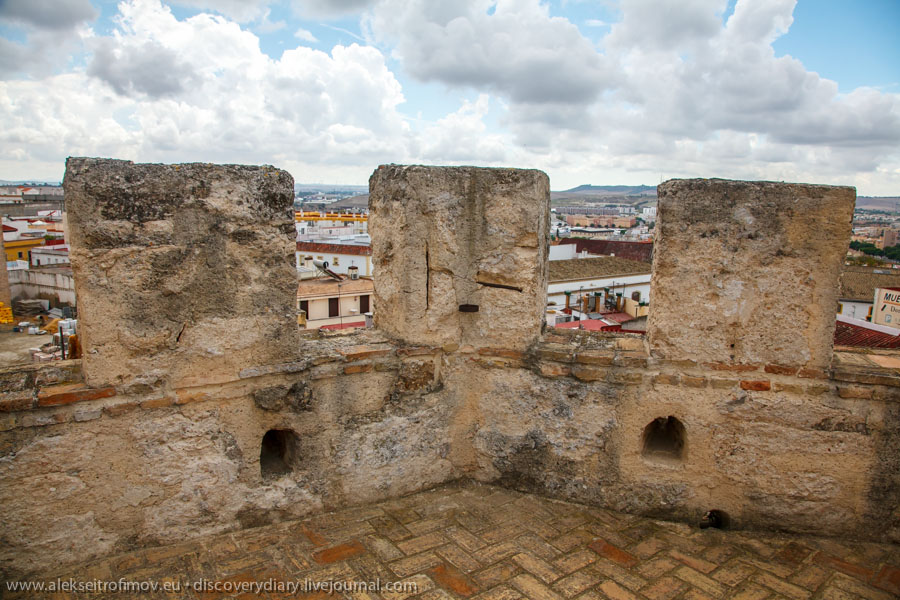 Apart from the garden and the walls, there are very few traces of Muslim buildings left in Alcázar – but among them is this unexpected water reservoir. The entrance is hidden among the trees in the garden. 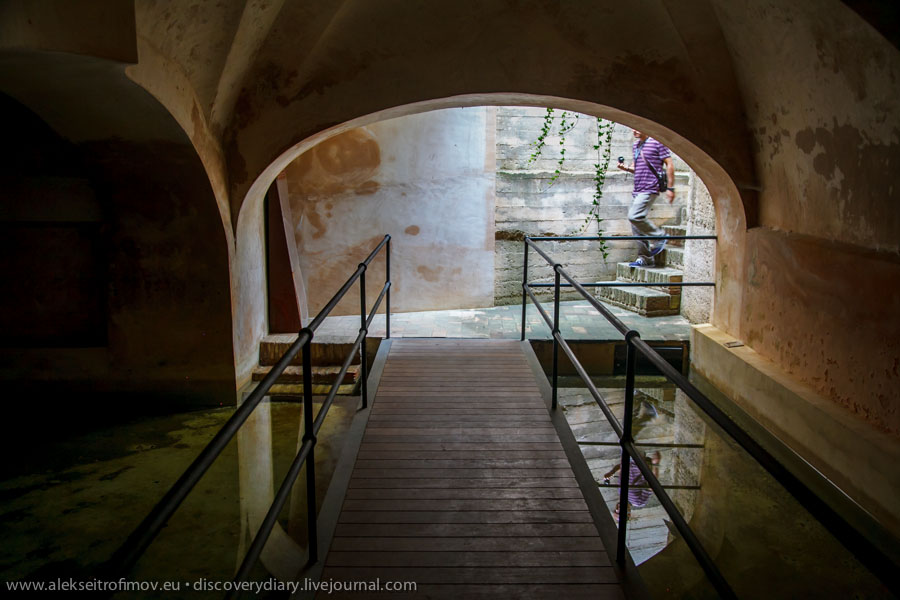 The reservoir is quite sizeable. The Muslim rulers of Spain had a sophisticated taste and very highly cultured, easily surpassing their European contemporaries in that regard. The geography and ultimately history were however on the side of the advancing Catholic wave from the North. Cut from their brothers in faith by the Mediterranean sea, the Muslim states of Iberia fell one after another under the attack of the North. I keep wondering how the cultural contrast has flipped through the centuries too. 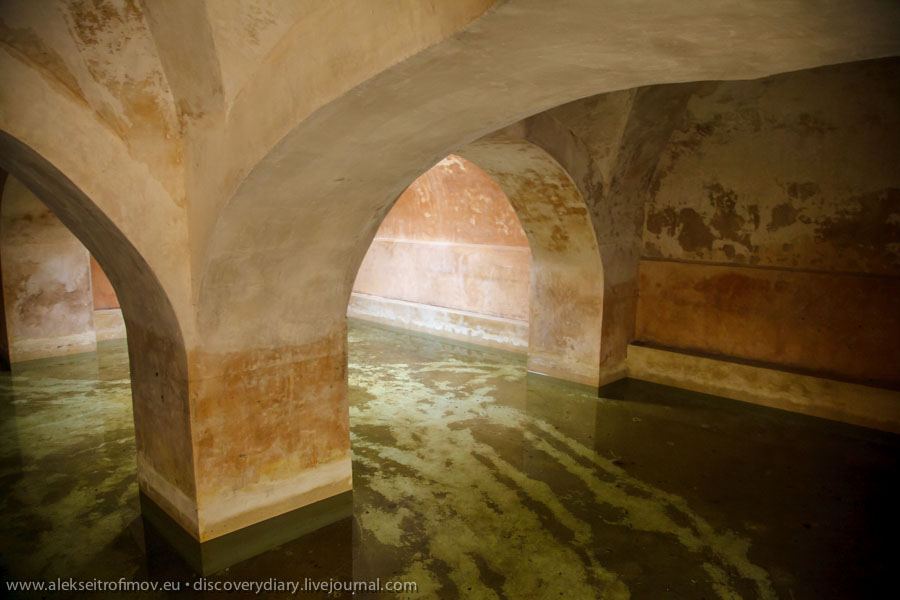 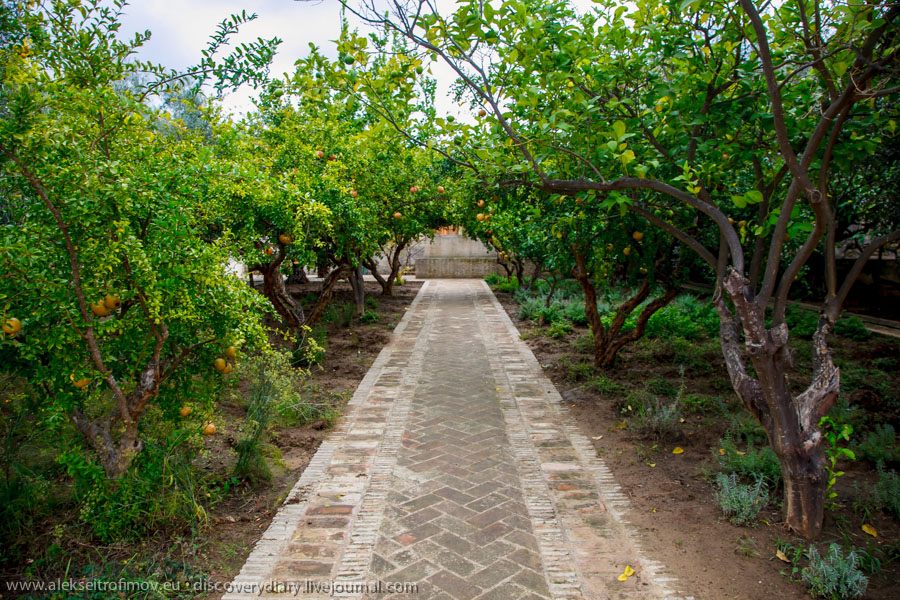 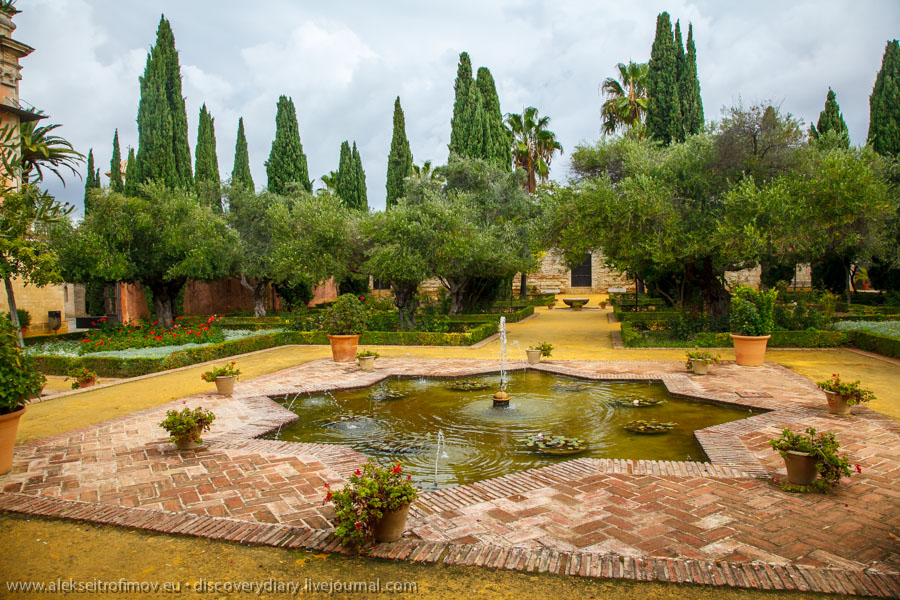 In front of Alcázar’s entrance there is this wonderful grove. You can see the dome of the Jerez Cathedral though the trees. 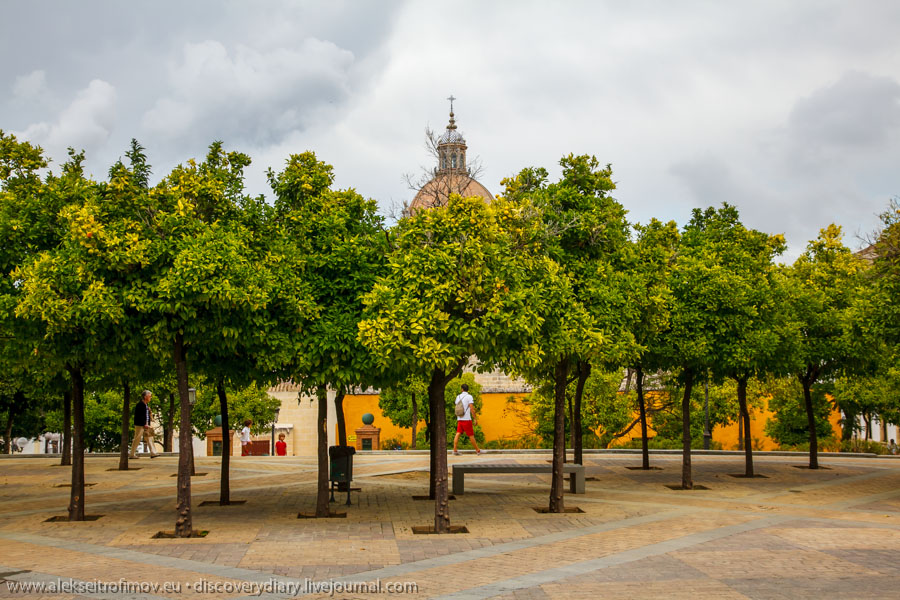 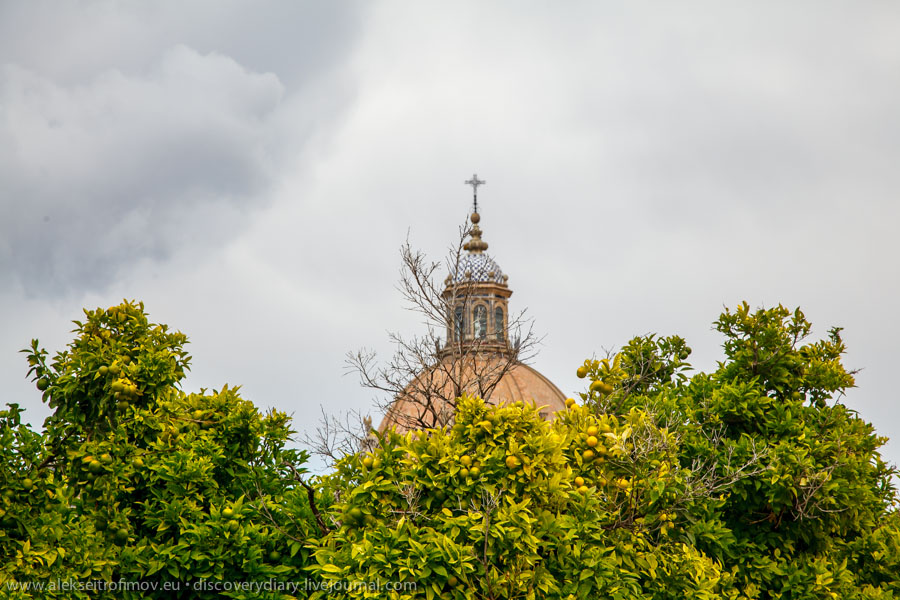 It’s just a short walk away. The back wall of the Cathedral which you face first as you approach from Alcázar. 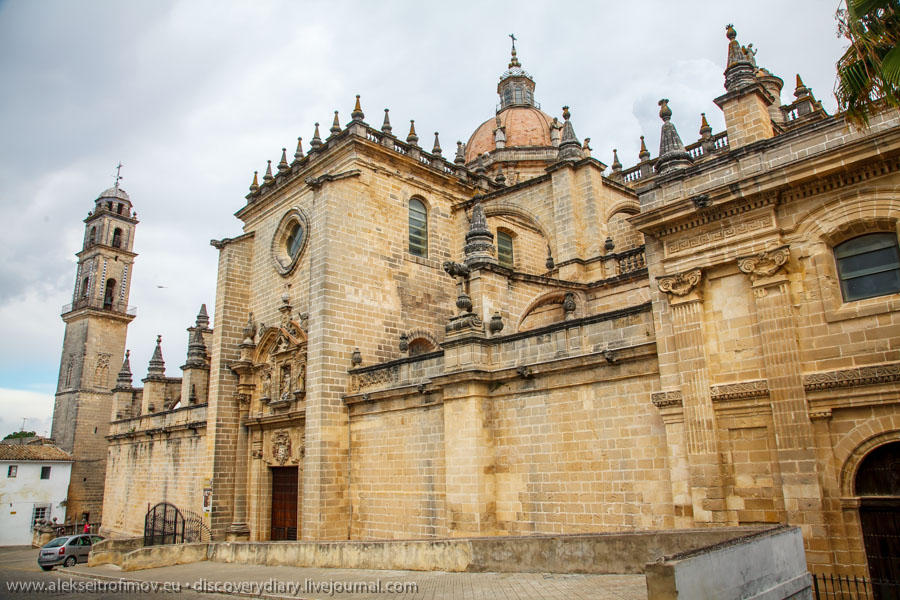 And it’s main façade – pretty remarkable it has to be said. Considering its size, Jerez really impresses. It’s full of tourists, everybody speaks English, and it’s quite difficult to imagine here that Spain has been in economic crisis for so long. 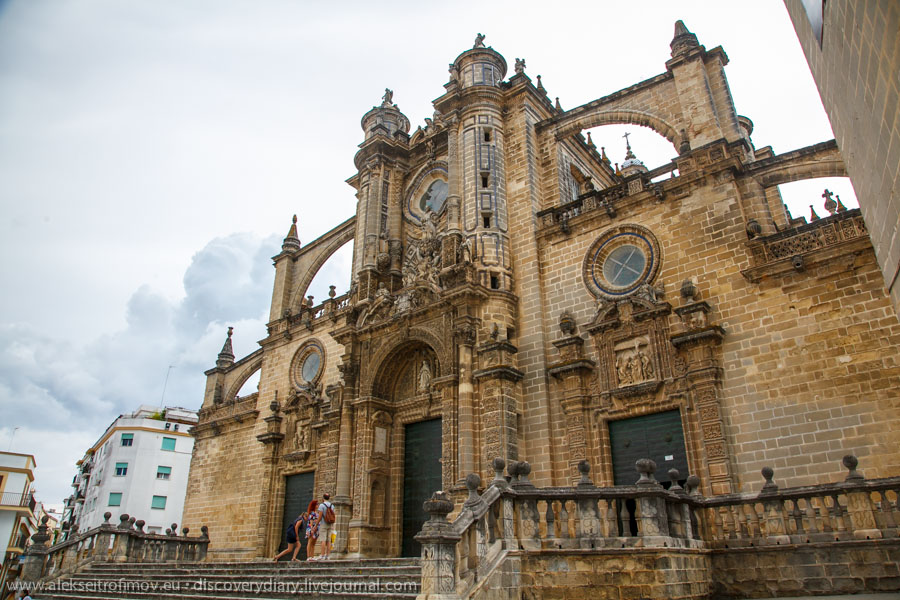