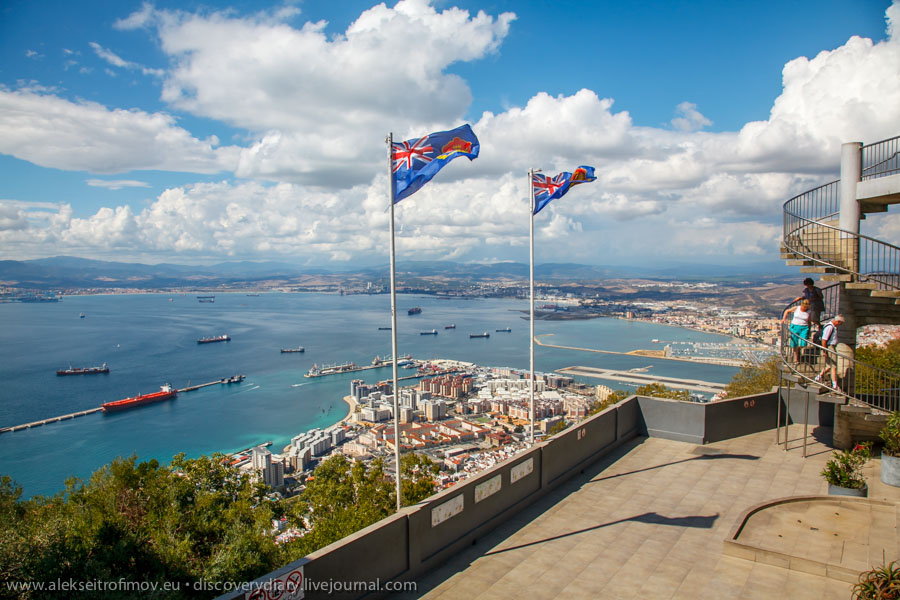 Actually at first approach the Rock looks thus. Indeed on the generally flat Southern coust of Spain the Rock looks like a geological misunderstanding, placed by an unknown magician to divide and lure conquerors. This photo was made already after crossing the border. 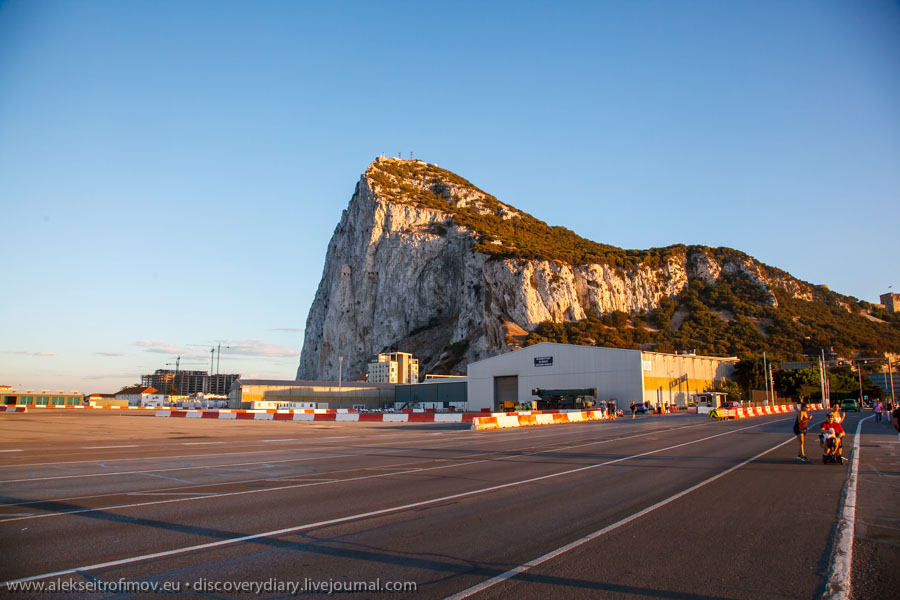 In fact I stayed in La Línea de Concepción, a small township immediately to the North of Gibraltar. In Gibraltar itself there are about five hotels which charge crazy prices, whereas La Línea is full of very cheap hotels – I stayed in a very proper place for all of €22 per night. As you can actually walk from La Línea to Gibraltar quite easily, I saw no point in insisting on staying there. Crossing the border with my passport was a pure formality. Of course as Gibraltar remains staunchly British, the currency used here is the British pound. (I note in passing that you are much better off exchanging your euros into pounds on the Spanish side of the border – in Gibraltar the currency exchange tariffs were a rip off.) Gibraltar has the right to mint its own coin – a Gibraltar pound – which looks very much like the British coin, however formally it’s not accepted outside of Gibraltar, so you better get rid of them here. I bought 10 pounds before crossing but later discovered that in fact you can pay everywhere in Gibraltar by credit card – so even 10 pounds was too much.

The border from a high point in Gibraltar. Here you can see La Línea in the distance, then the border installations and even closer is the runway of the Gibraltar airport. As you cross the border you have the option of walking across the airport runway – much like you would cross a road, with traffic lights and all. You can also take a bus. 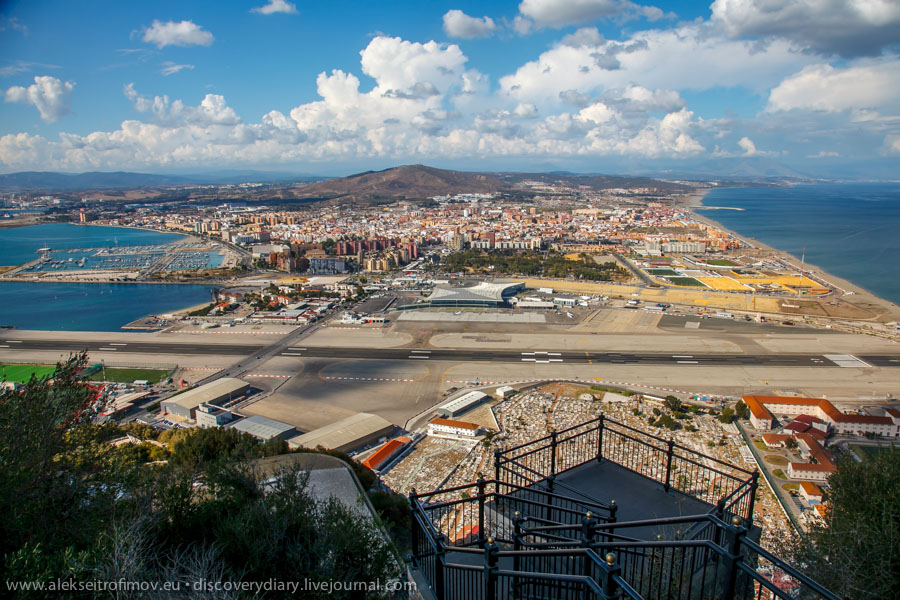 But I did cross the runway on foot on my way back. The setting sun lighted it. 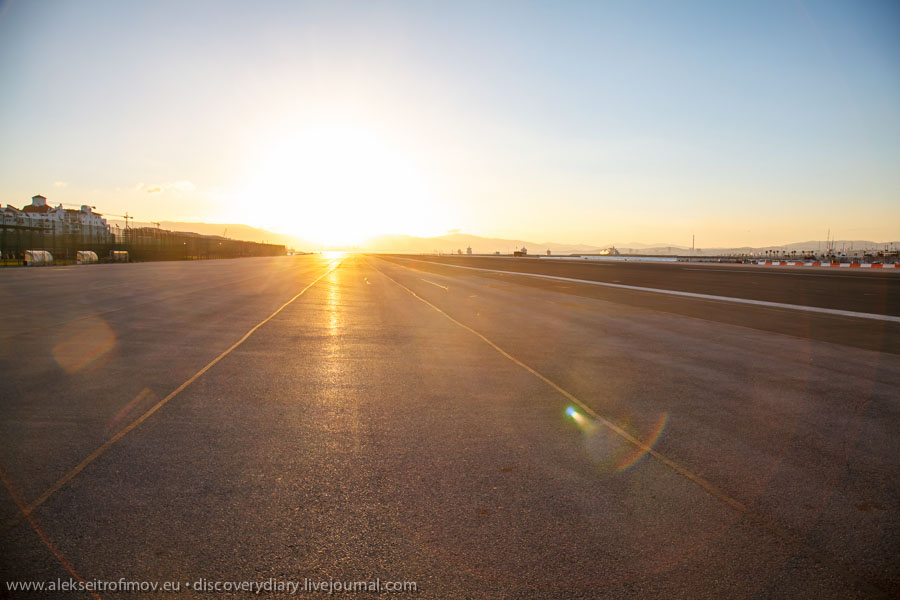 The bus from the border takes you smack in the middle of Gibraltar. I took it in the morning as it was included in the price of a cable car ticket that I bought before crossing the border. This is a very good idea as it allows you to skip the endless queue lining up by the cable car office – that queue apparently takes 1.5 hours. 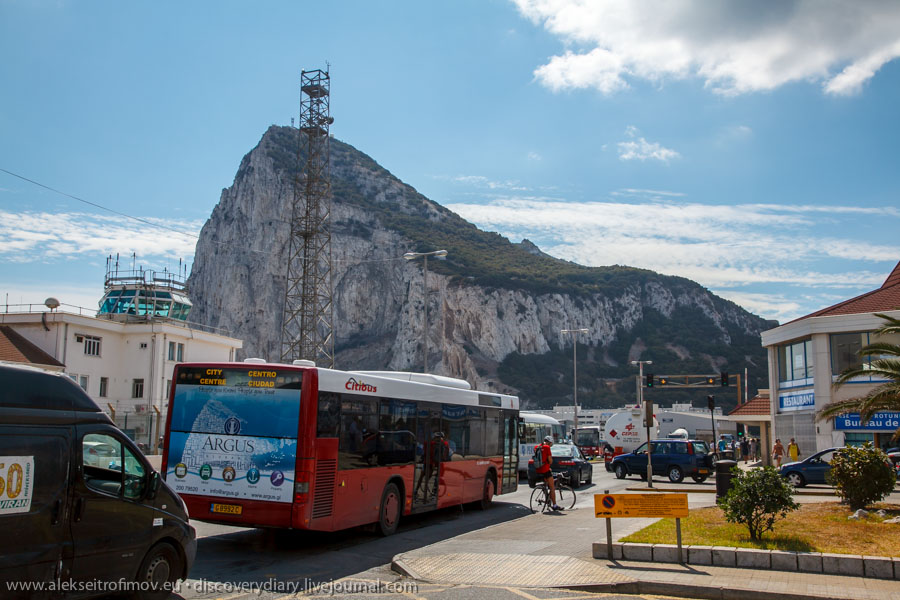 The Main Street of Gibraltar. So British. 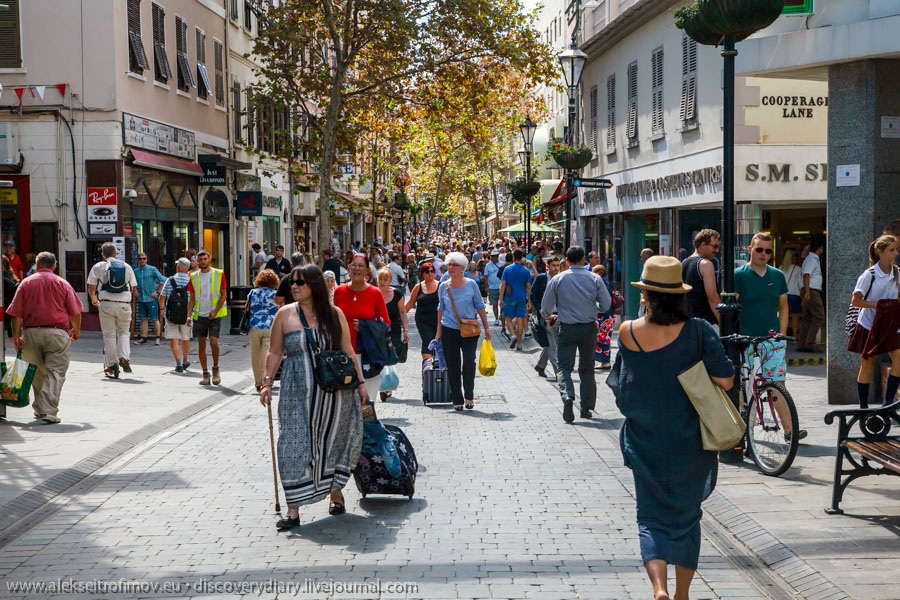 Grand Casemates Square – that would be the main square of the city. A ceremony is being prepared that I couldn’t identify. 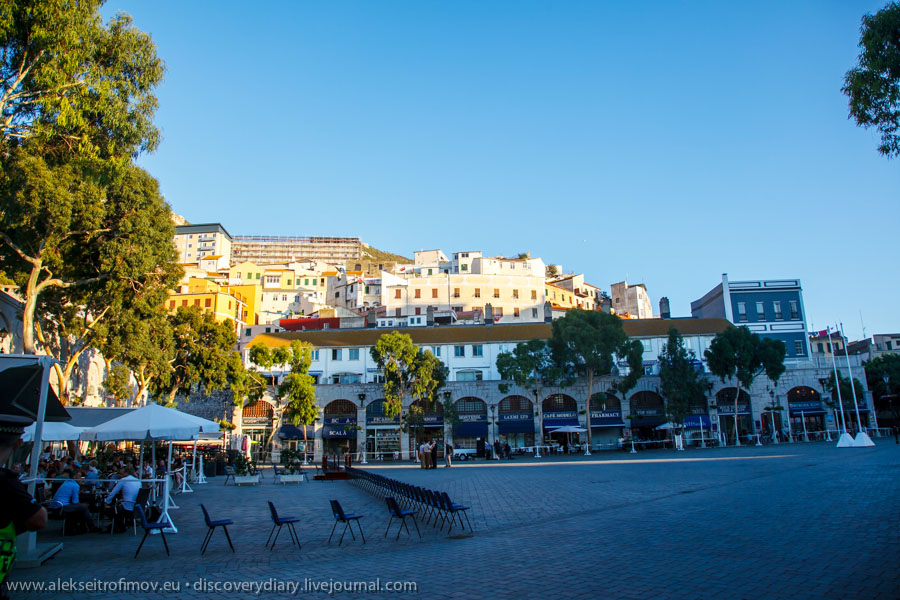 The end of the Main Street is marked by these gates in the city wall built by Charles Quint himself, when Gibraltar was still the property of Spain. To this day the Spanish cannot accept the loss of the Rock. 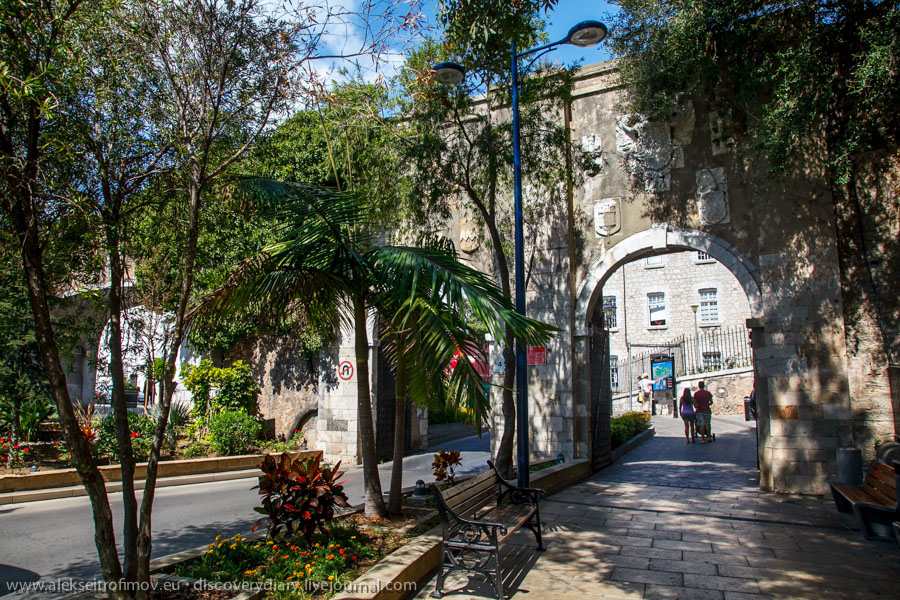 The main tourist attraction of Gibraltar is surely the Rock itself. You can climb it on foot but cable car is so much easier and quicker. The view from the cable car as we go up – direction North. 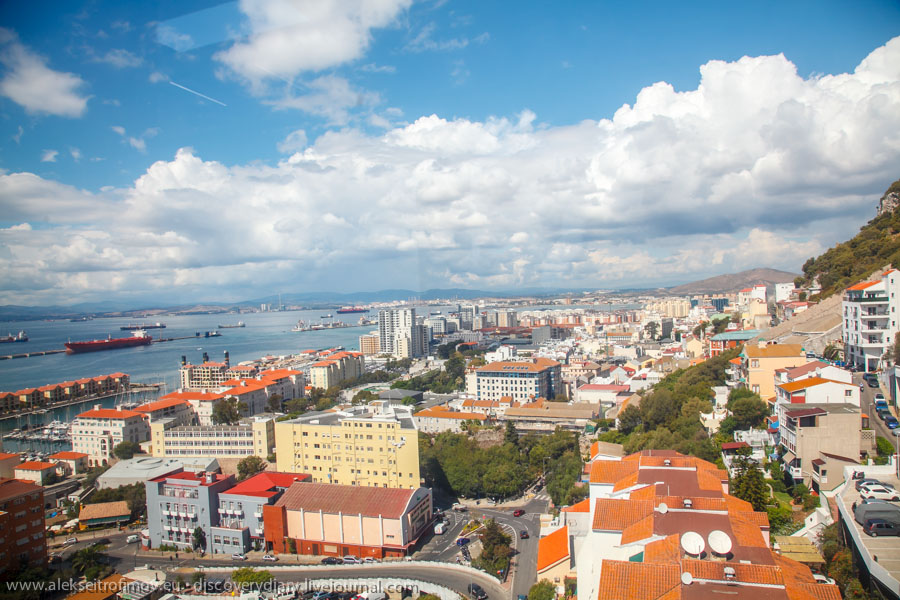 We are getting ever higher. 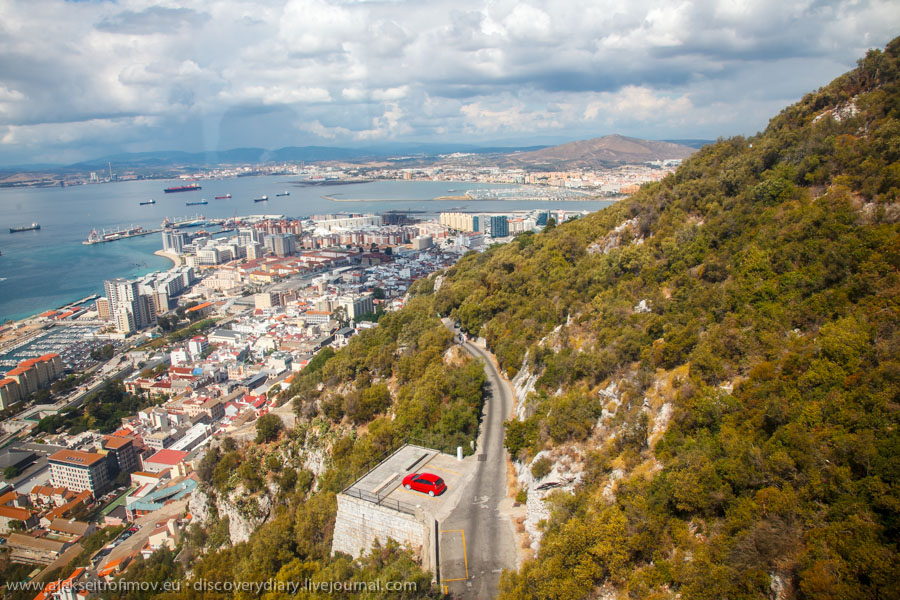 Finally we get to the very top of the Rock. The view from the lookout to the North. The Rocks has several peaks, and this is the Northernmost – you can see La Línea behind. 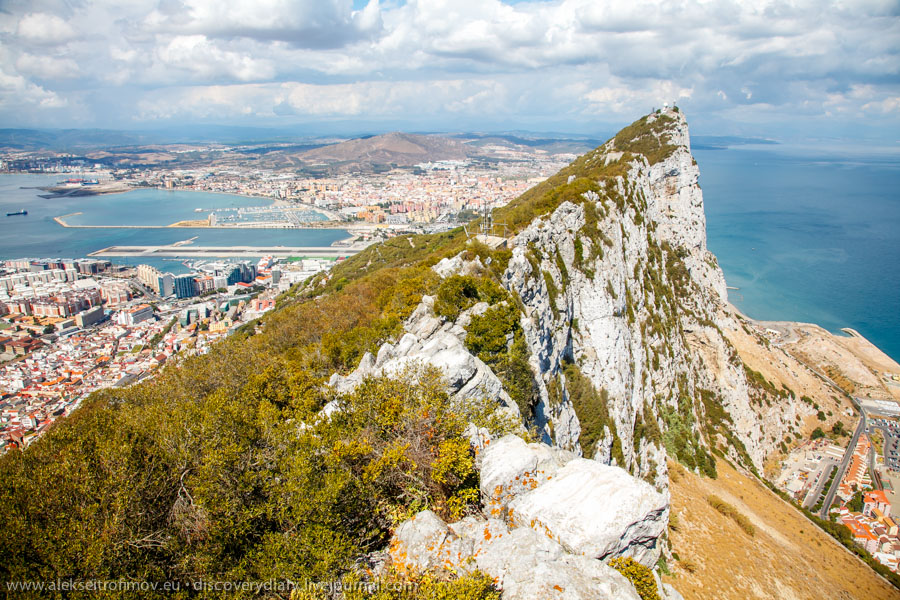 The cable car station at the top of the Rock is the kingdom of apes who live there in the wild. It is the only place in Europe where a population of free roaming apes persists. They say that the English will stay in Gibraltar as long as there are apes. In the 20th century the ape population declined to the point of extinction and reinforcements were brought from Africa. The apes are not timid at all, you have to watch your steps as they will gladly snatch any object that they might find interesting. 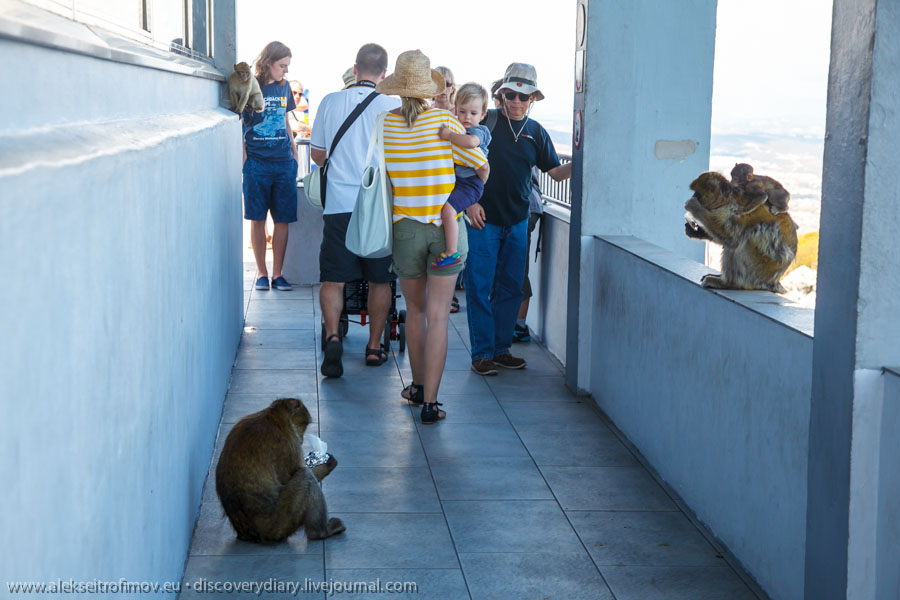 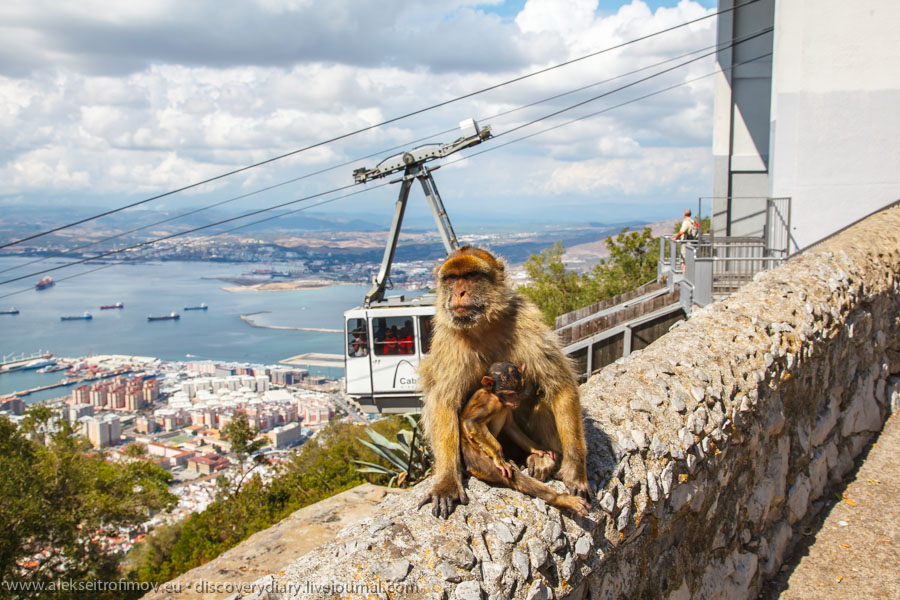 I headed on foot from the cable car station to the Southern peak of the Rock – the so-called O’Hara Battery. 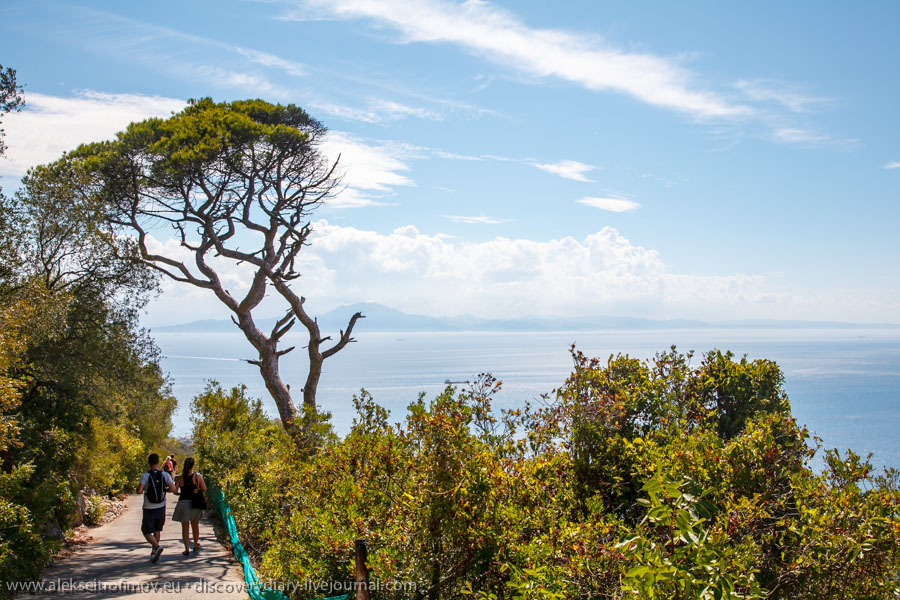 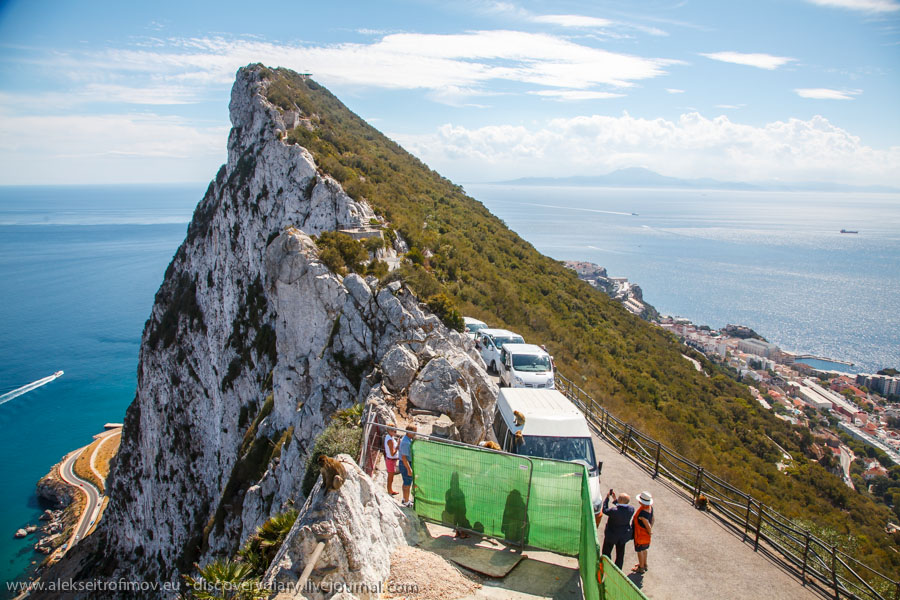 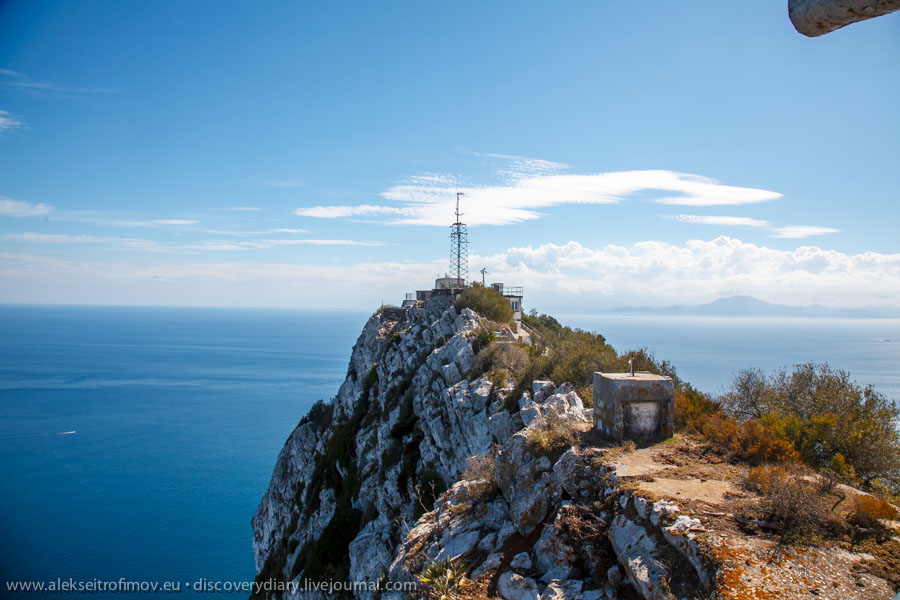 As you climb the peak, you get to see the Battery: 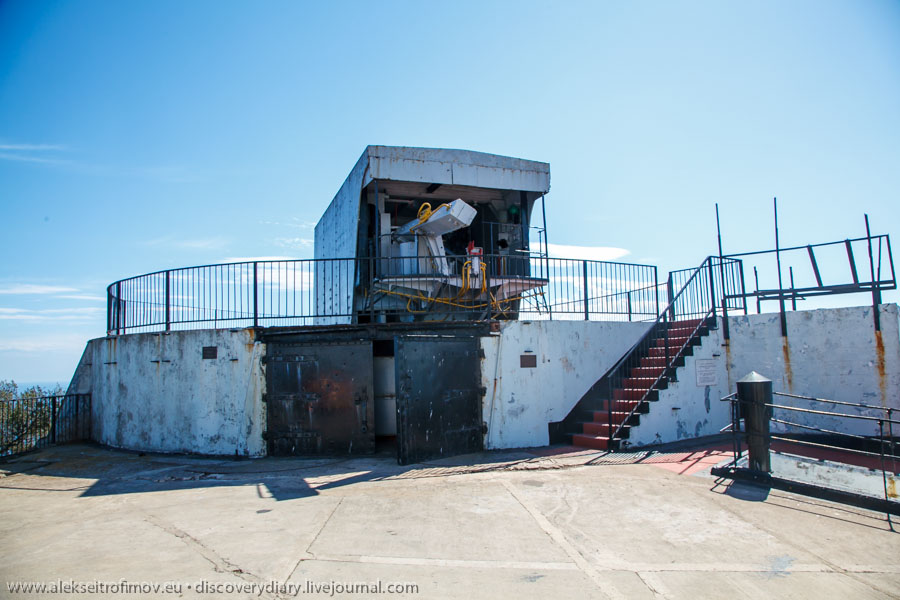 This is where the cannon is pointed. South. Here you can feel while throughout history Gibraltar was the key to the strait below. 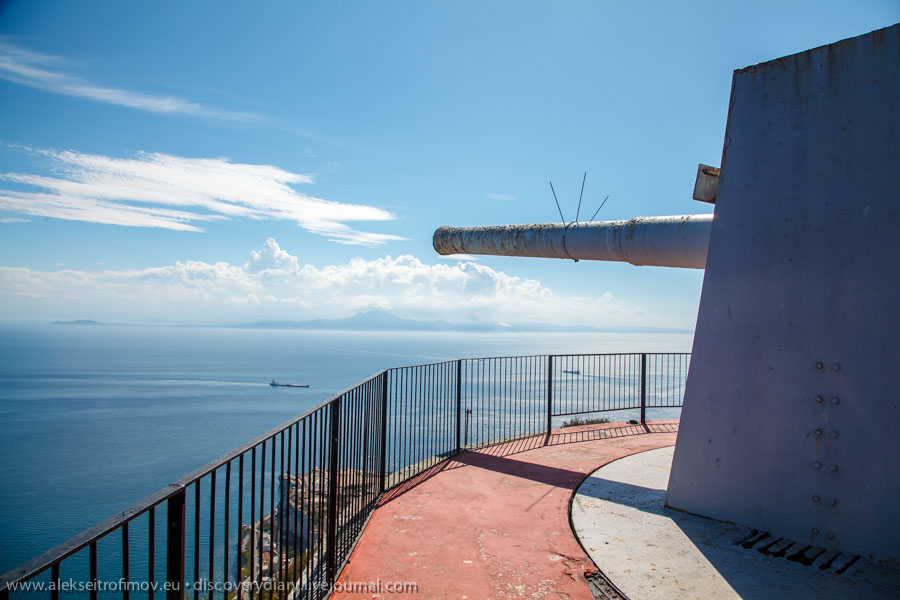 Looking down from the cannon. Africa, i.e. Morocco, is in the centre. To the side is Spain’s Algeciras peninsula, which extends way more to the South than Gibraltar but has no strategic importance because it’s flat. 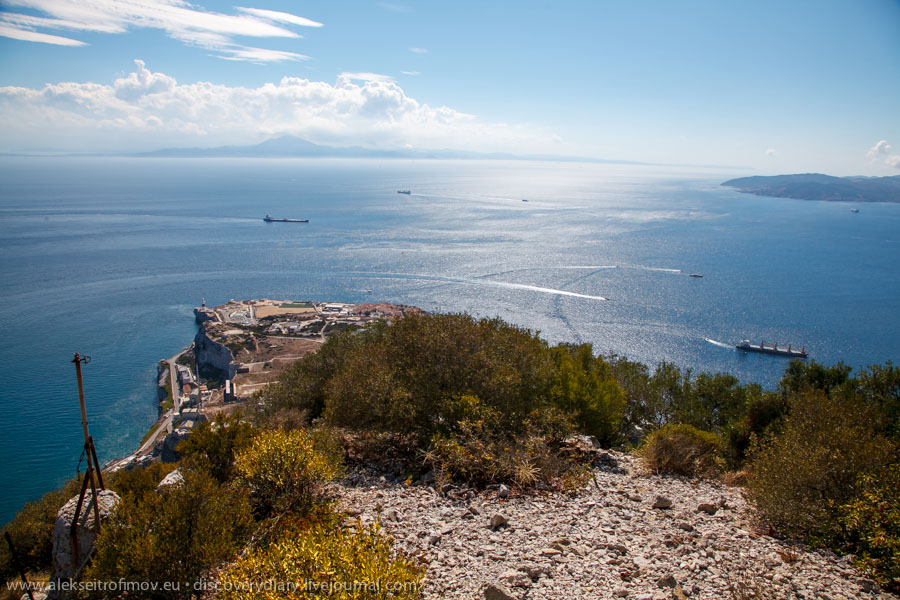 Underground tunnels built during the World Wars inside the O’Hara Battery. 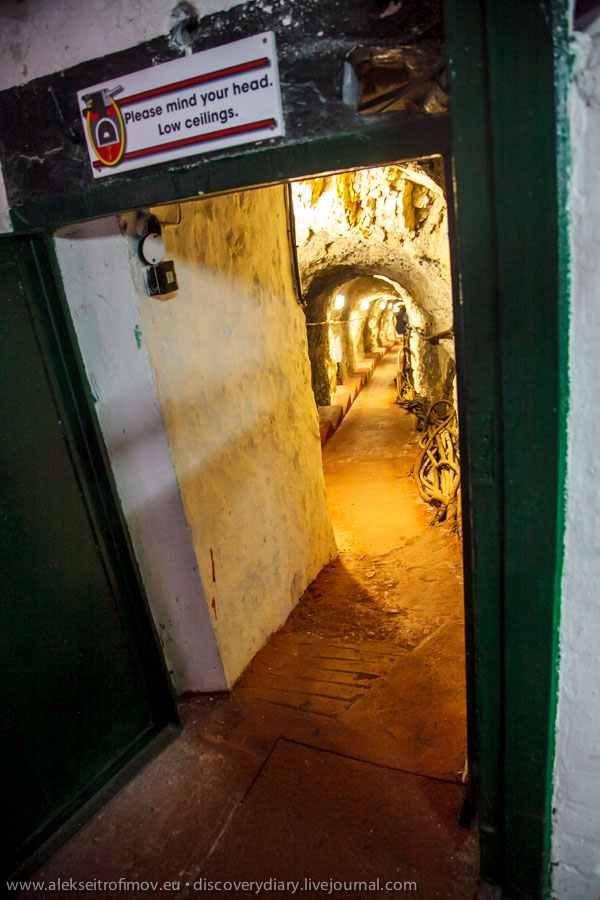 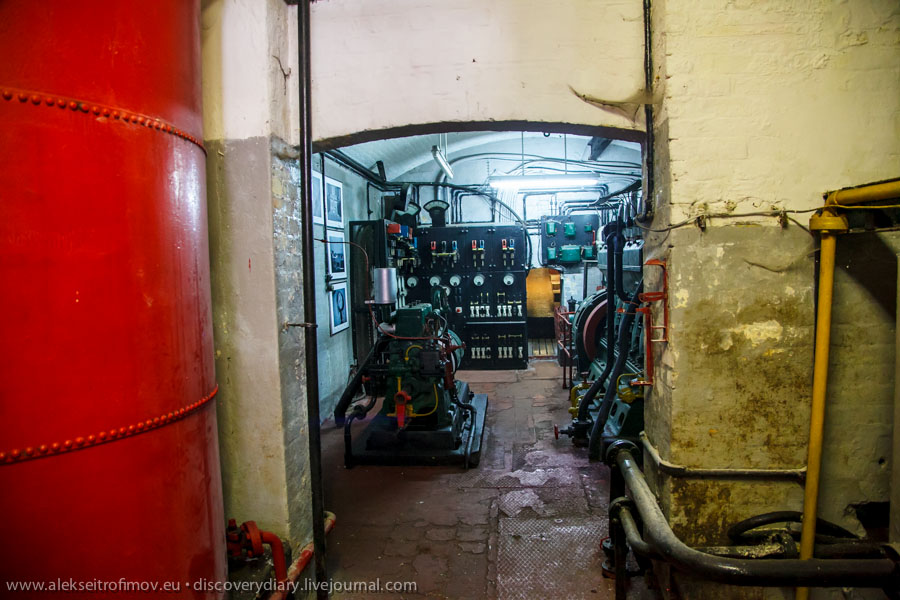 All of the Rock is in fact infused with innumerable tunnels. The English started this hundreds of years ago, but the majority of tunnels were dug in the 20th century, especially during WWII. At some point Gibraltar served as the Allies’ main headquarters and Eisenhower was managing the African campaign from here. 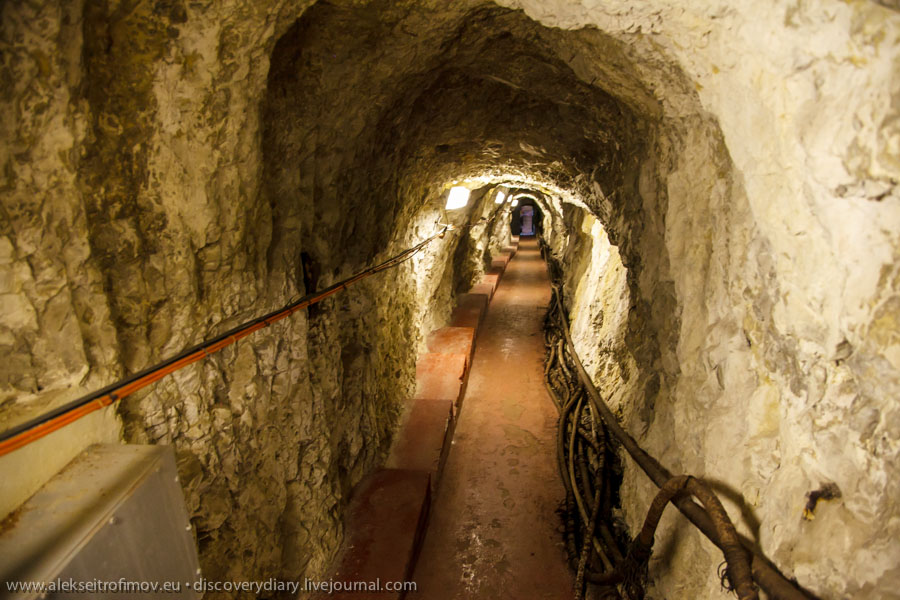 The Eastern shore of Gibraltar. 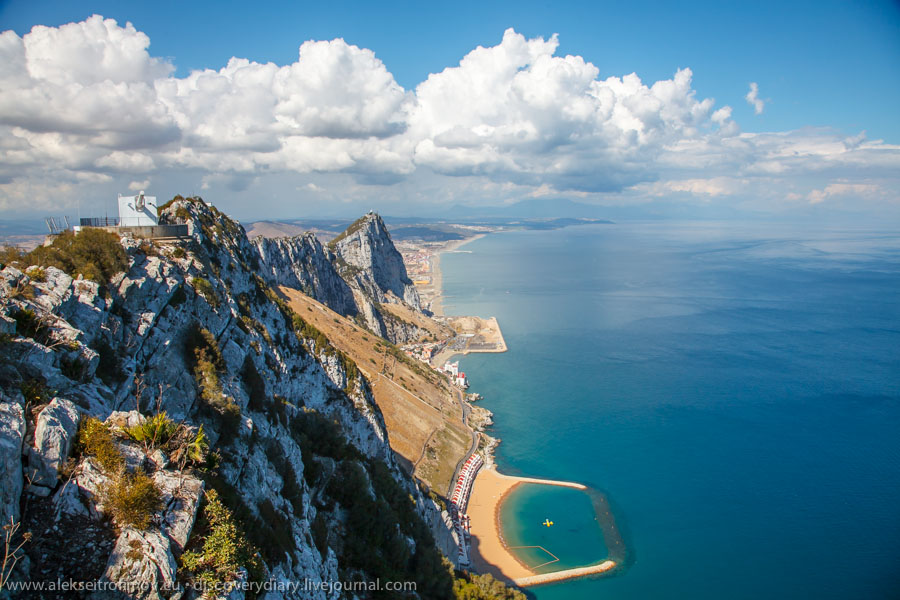 Yet another incredible sight inside the Rock – the so-called St Michael’s cave. In fact it is a huge complex of caves that has naturally formed inside the Rock. In the old days it was believed that the endless corridors inside the cave eventually end up in Africa. I’d recently been to the amazing Sardinian caves, but even so I was smitten by this cave complex. Here it is enterprisingly lit with flowing coloured lights. An unexpected use has been found for the main cave – it’s a concert hall! 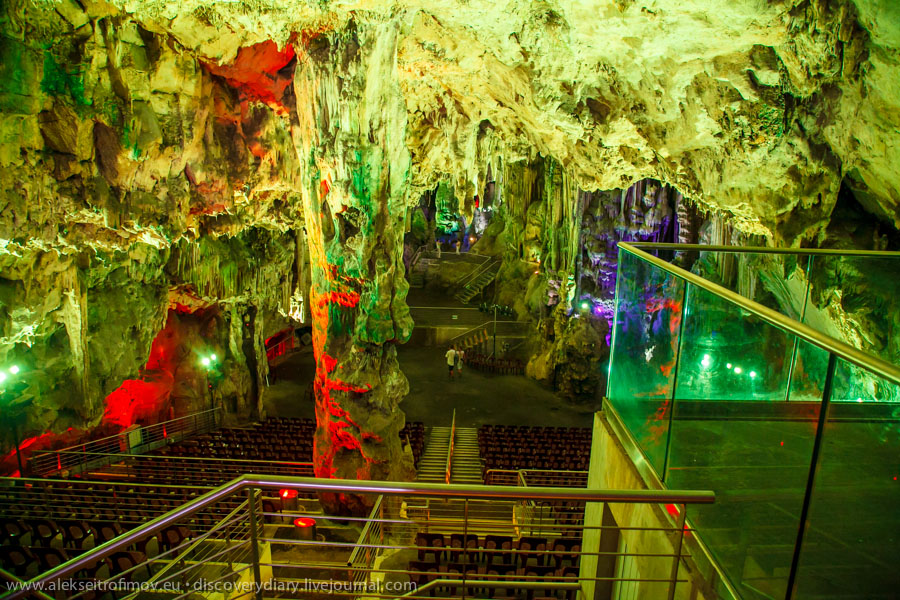 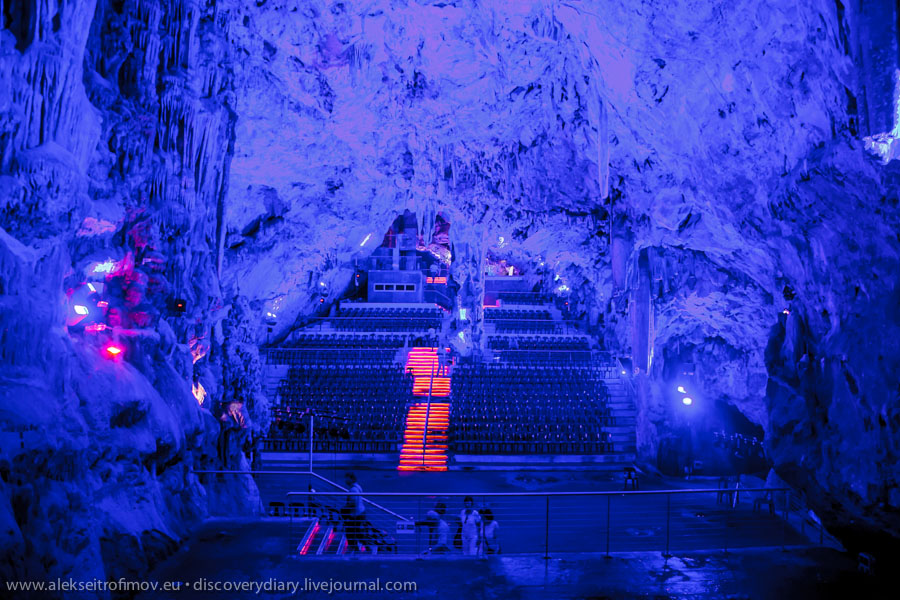 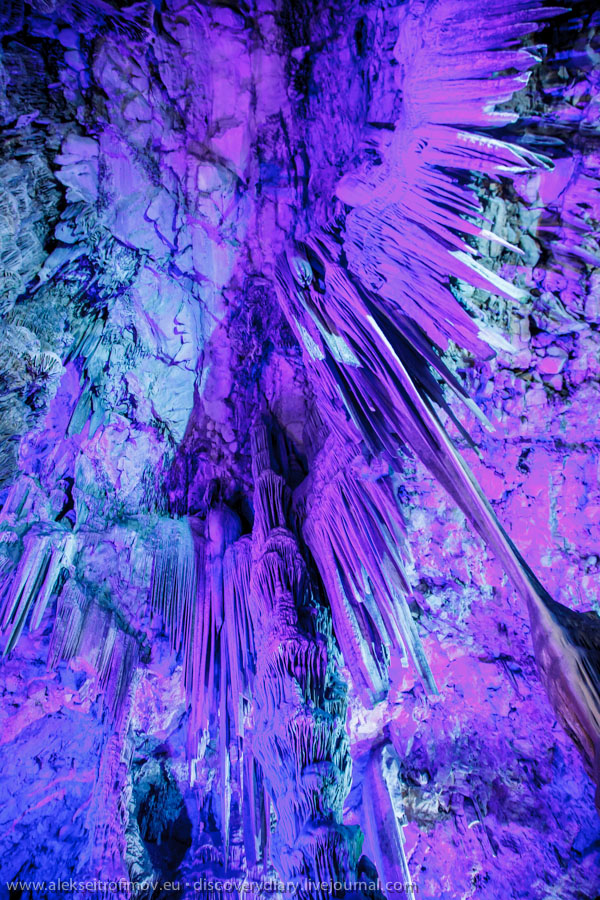 As you walk down the Rock you pass through another Battery that today serves as Apes’ Den – a refuge for the local apes. I opted out of going to the Den itself. 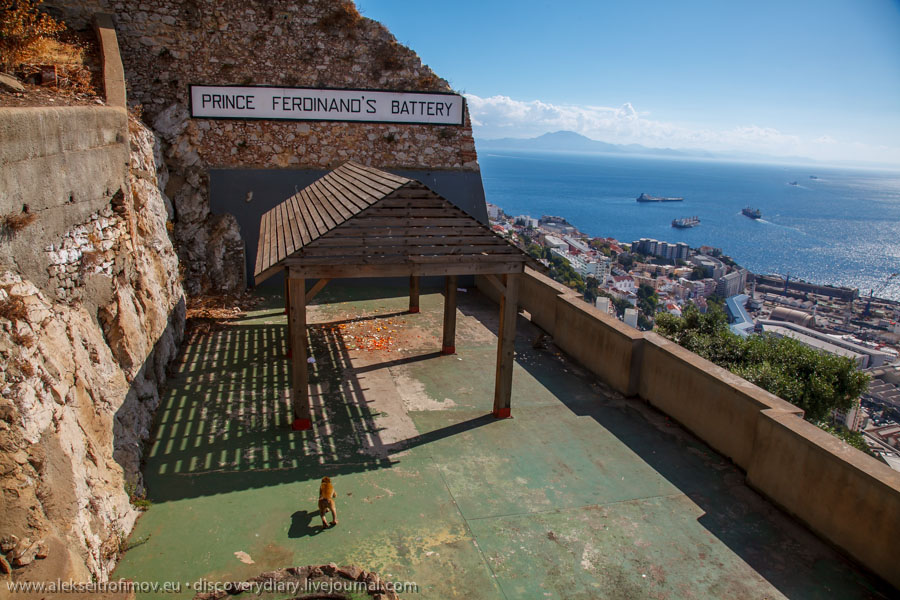 Great Siege Tunnels are another fascinating attraction inside the Rock. These were built during the 14th (!!!) and longest siege of Gibraltar which took place in 1789-1793. The siege was laid by the joint forces of Spain and France. Despite the length and the violence of the siege, it ultimately failed. This tunnel in the Northern part of the Rock was built in order to control the Eastern approaches to the Rock – the one strip of land where the fire of the English cannons could not reach previously. The Tunnel is incredibly long – it takes about an hour to go through it all to the end. Its main destination near the end is this hall. Once it was built and a range of cannon was installed, the siege was doomed. 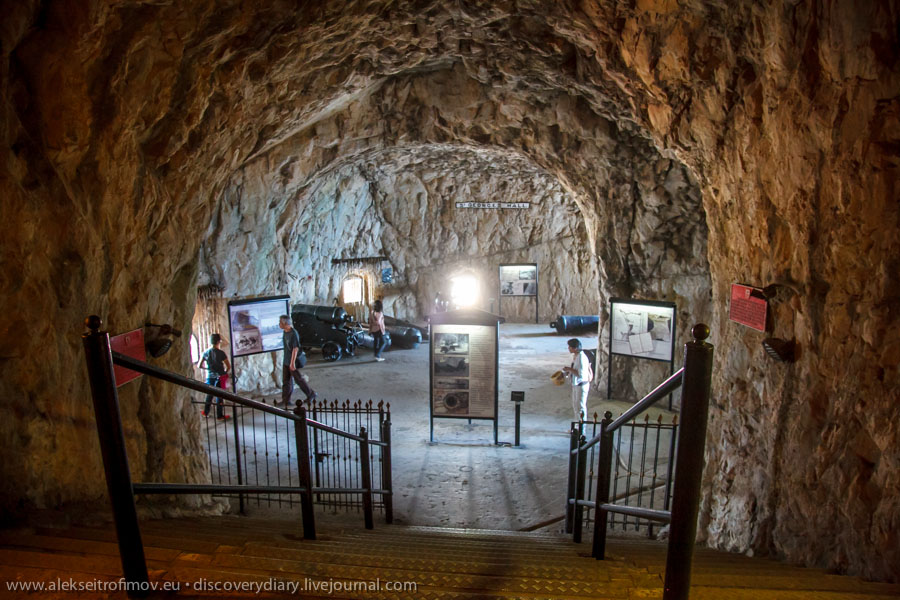 The very end of the Tunnel – its exit in the Eastern wall of the Rock. The soldiers are of course mannequins built to represent how this place looked during WWII. And they leave quite a realistic impression. I could almost hear the bullets. 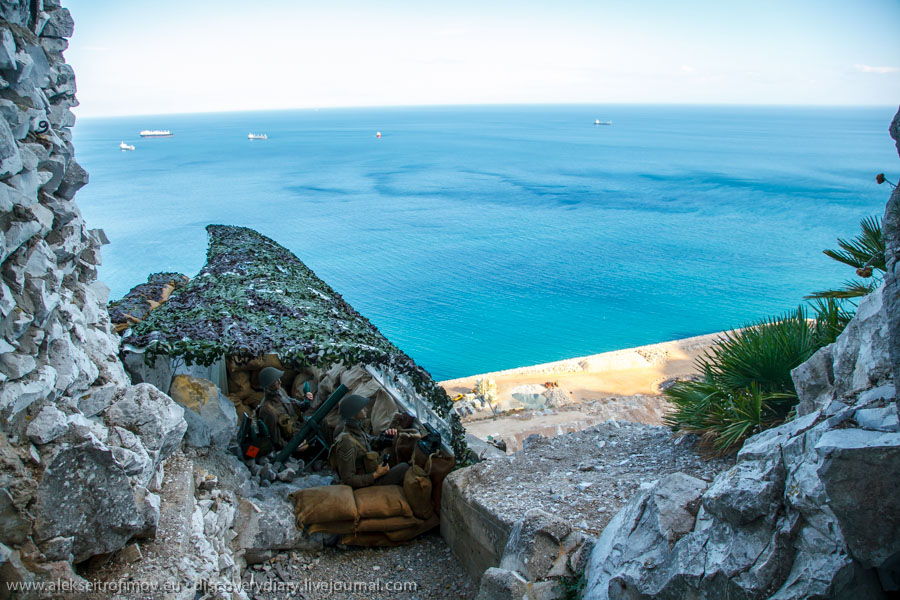